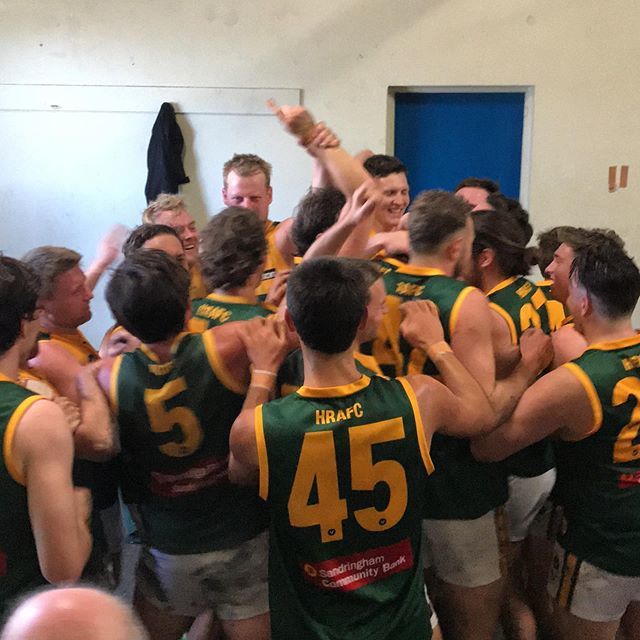 On a glorious winters day, where else would you want to be but at EE Gunn Reserve to see the battle for 4th spot on the ladder. Both Rovers and Ormond on 36 points but the latter ahead in 4th spot with percentage.

The game started and Daley set the scene with a bone shuddering tackle at the first bounce to announce game on! Both sides were hard at it from backs to forwards and it was very tight for the first 10 minutes. Monders breaking the arm wrestle with some very slick ball movement starting from half back. With a clean mark, hard running ball receives they transitioned the ball to their forward line with precision and banged on 4 goals over the next 10 minutes to leave the Rovers trailing in their wake. The stats said the contest was even, but the scoreboard disagreed – Ormond just cleaner. The Rovers finally on the scoreboard with a minute to go courtesy a nice pass from Pav to Jones on the wing who took a good mark then courtesy of a punch to the back of the head took the 50m penalty and converted.

Ormond looked on top and were able to make space with clearing handballs and clean delivery to hit the scoreboard while the Rovers were a bit more fuggly getting it forward.

The 2nd qtr started fierce again. Jewell brilliant across half back taking 2 fantastic intercept marks early on helping to keep the ball locked into their half until a Lovig snap goal got the scoreboard ticking over. The Duck was now starting to put on a show and getting a good clearing handball to Dales who got the ball forward quickly to Dougie who marked and goaled to continue the momentum for the Rovers. Irish (Culligan) was playing some good footy and using his strength and vigour and Zac Donald was getting involved. Meanwhile the coach’s words at qtr time had stopped Moners “run & gun” forward by the Rovers applying strong pressure and preventing easy outside run by’s. Suddenly the clean clearances from Ormond were became forced turnovers and the Hugster capitalised on one such spill to pick up the loose ball & goal for the Rovers. Sharry was excellent across half back, repelling Monders attacks and when Lovig won a free kick in front of goal for a good tackle it was 5 goals in a row for the Rovers to hit the front at the long break. (Ormond 1 solitary point for the quarter.)

Half time score Ormond 4-5-29 Rovers 5-2-32 (weirdly only 2 scores to the northern end and 14 scoring shots to the southern end despite no wind.)

SO the 3rd qtr started and the Rovers first on the board after Lynch took a great mark near half back kicked clear to a hard running Zaina who marked and sprinting forward kicked a long goal. Monders did have some chances but points resulted until they replied with their own goal at the 17 minute mark it was scores level at 38 points apiece which just showed the game was still there in the balance. Then something happened. Charlie M had a long shot at goal which went through via a clever shepherd by Clem and then the mids for Rovers began to take control. And what could be better than running through the midfield having a smorgasbord of choice between Jacko, Clem, Lovig (resting) stalking the forward line to take big marks. And the big forwards were marking everything!..Sadly though they were missing some very gettable shots at goal.  (Jacko – where are your kicking boots?) But the tide seemed to have turned for good with the Rovers having plenty of forward time. Miles copped a high knock in front of goal and was awarded a free but with him seeing stars it was gifted to Gags who didn’t let him down by converting the six points. Ormond had another responding goal but the tide had changed. Duck Donald giving off a nice pass to Zac (Daffy?) Donald who converted a goal to break his duck for the day to give the Rovers a handy 15 point lead at the last break

Ormond had the first score with a point but then the Rovers responded with brilliant play around the coast from the kick out ending with the Duck marking and kicking the first goal. Ormond weren’t giving up however but the backs led by Taylor, Lunch, Robbo and Sharry were reading it well and cutting off the attacks. A few times Ormond had it forward but from each resulting point the Rovers cleared it around the boundary line to get it deep forward each time. The most skilful linkup play I have seen all season by the Rovers ressies. A few shots were missed but then a great series of passes ended with a handball to Merlo in the goal square who couldn’t miss. Gags finished with the last goal on the run to see the Rovers run out somewhat comfortable winners.

A great team effort by the Rovers as many of the goals were set up by play makers from the backline, midfielders running hard and providing link ups and many unselfish acts of players giving off to others in better positions. A spread of 10 goal kickers and keeping Monders to 6 goals a says it all.