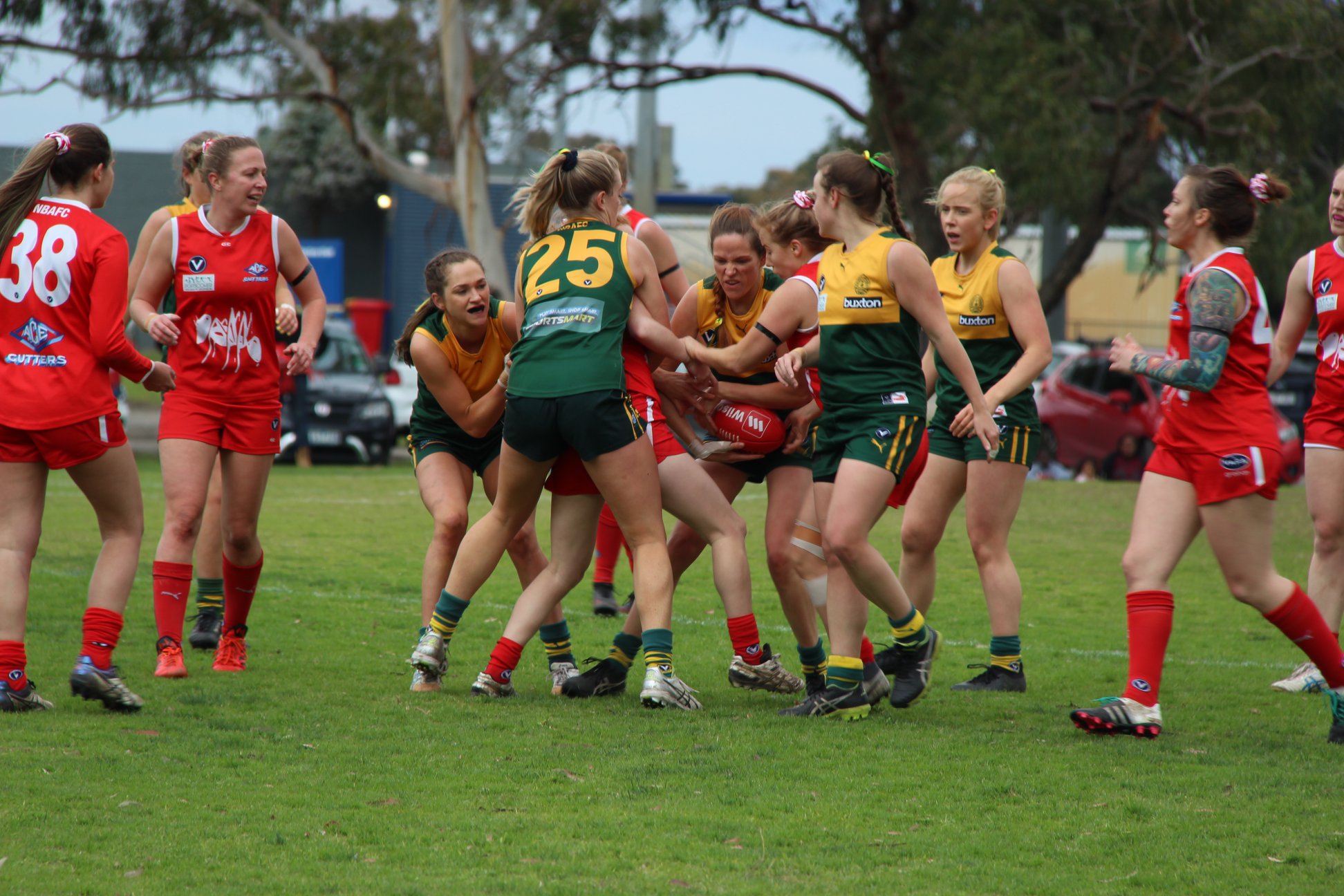 The Hampton Rovers Women’s team fought hard in difficult conditions, but fell to Preston Bullants in the 2019 Grand Final at Keysborough on Sunday.

There were high expectations for a really good contest as these teams were one win apiece from their home and away ‘epic’ clashes during the season.

The match began in windy and overcast conditions at the Mentone Grammar Playing Fields, with Preston having the advantage of the breeze in the first quarter. The Rovers were playing really determined and strong football and the majority of the quarter was played in our forward half of the ground.

When Preston did go forward our defenders were locking their forwards down really well. Chloe McLaren’s strong marking was again a feature of the Rover’s backline work. Grace McArthur was doing a great job with her smart intercepting and a real highlight was the awesome spoil by Megan Temple in the last line of defence!

Late in the quarter, one of the few times that Preston had gone deep into their forward line, their full forward marked strongly and goaled.

Preston took a handy seven point lead going into the second quarter, especially as the wind seemed to have turned around. So again, we were kicking against the wind!  However, after an early tussle where neither side could gain an advantage, the Rovers suddenly came alight. This was on the back of some great pressure football that our team had applied from the start of the match.  Bianca Lenarcic, Taylan Merrick and Amy Cullen led the way with some superb work out of the centre and around the ground.

Maxine Behnke’s marking on the forward line was creating opportunities for us. Soon Bree-Anna Kavanagh after a brilliant pick up had a snap which only just missed…we were finally on the scoreboard!

Kristy Ebbott was doing some good work off half back as she has all year and Hayley Gould’s great tackle lifted the intensity of the whole team to another level. Bree-Anna got another point and Mandy Naylor’s also kicked a point which had all but rolled through for a goal.

Unfortunately, against the tide Preston kicked another goal but soon after Kate Holden’s clever pick up and driving kick led to a strong mark and set shot goal from Tarryn Hurst.

Not long afterwards Maxine Behnke somehow weaved through a pack and snapped truly for a sensational second goal to the Rovers. We had hit the front for the first time in the match.

Rovers held on to a four point lead at half time.

Preston got the jump on us and got a quick goal not long after the start of the third quarter. We followed with the play of the match that started with Chloe McLaren to Mandy Naylor to Zara Phillips to Tarryn Hurst for a soccered goal off the ground!

Hannah Bahn was throwing herself in, showing the way. Natasha Harrison was marking everything and Frances Della-Bosca was very committed and brave in defence.  Preston managed to get another goal before the end of the quarter.

Preston were two points in front the start of the last quarter which had brought the worst of the day’s weather.  The rain increased in intensity and the breeze seemed to again favour the Preston end! Unfortunately, things just didn’t go our way and Preston were very good and finished stronger in the last quarter kicking 3 unanswered goals to eventually win by 21 points to take out this year’s VAFA Division 3 Women’s Premiership.

The Hampton Rover’s Senior Women’s Team were very gallant in defeat and the whole club and supporters are very proud of their efforts.

Although they lost this Grand Final, if they continue to play the way they have throughout the season certainly they will get many more opportunities in the future.