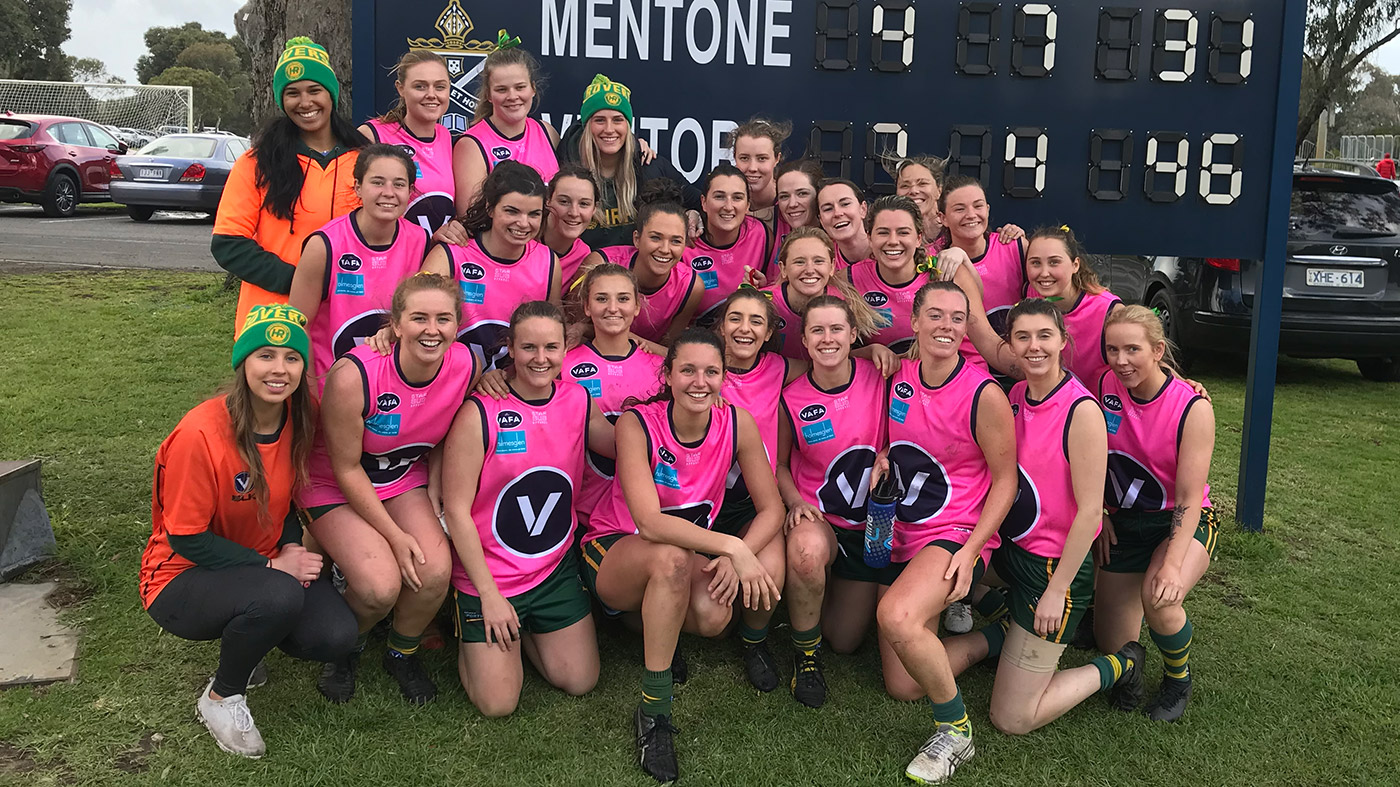 The Rovers were certainly going to have a hard battle ahead against the strong UHS-VU side, who had defeated Hampton in both previous games during the season, the last one by 23 points.

However, our girls had a great run into the finals, then played really well in last week’s first semi and were looking forward to this challenge.

UHS had the aid of a decent wind in the first quarter and the game started at a frenetic pace with both teams throwing themselves in. It was no place for the faint hearted!

It was going to be a slippery slog and certainly no ‘Sunday Picnic’, however we managed to get the ball forward early to where Zara Phillips marked strongly and converted for the first goal of the match.

Not long after UHS matched this and also brought up their first goal.  We were under intense pressure for the remainder of the quarter but our backline were simply magnificent once again, repelling almost every forward thrust, until right on the siren UHS scored their second goal.

Although down on the scoreboard, there was some great signs for the Rovers. Bianca Lenarcic was showing the way, Jaimie Roberts and Amy Cullen were amongst it and creating opportunities and Chloe McLaren was brilliant once again with her marking and clearing kicks.

The challenge was now ahead for The Rovers to make the best use of the wind and it was now or never! It was a slow start to the quarter as UHS were throwing everything at us.

Once again our back six held firm and Kate Holden was showing great anticipation with intercepting the ball and finishing with her long kicks.

Soon our lift in intensity paid dividends and Tarryn Hurst got things going with a smart goal kicked off the ground and then not long after but this time with a pick up and snap, again it was Hurst for her second for the quarter.

Things were starting to happen for us now as we were working hard all over the ground. Then was a great passage of play when Taylan Merrick swooped on a loose ball in the centre, got it to Bree Kavangah who got it to Nicky Clarke and then back to Bree who kicked a fantastic goal!!!  Goals followed with another mark and true kick by Tarryn Hurst and then Zara Phillips got her second after a great tackle and well earned free kick.

A great quarter for our girls who kicked 5 unanswered goals!

This quarter The Rovers were going to have to answer the challenges that were going to come at them from UHS who are a very accomplished team and also a tough side to keep down.

We were playing great desperate footy. Mandy Naylor’s efforts were inspiring and Kristy Ebbott with her great tackling was making sure that UHS didn’t get any easy possessions.

Maxine Behnke was having a really impressive game as was Katilyn Chase who was making a real impact by being desperate to win the ball.

Despite all our hard work throughout the third quarter UHS got late goals after a free and 50 metre penalty and also from a kick off the ground in the goal square.

After an inspiring 3 quarter time address by coach Paul Curry the girls were ready to give their all!

Bianca Lenarcic was putting her heart and soul into the contest as she had done all game. Her ruck work, strong marking and non stop efforts were awesome and got everyone going.

UHS were fighting hard but our women were ready for the battle.  Natasha Harrison was in everything and took a strong mark to hold off the opposition.

Maxine’s ‘poster’ bought the oohs and aahs of the crowd as it could have almost been the sealing goal.

The girls did hold out the game from then on and to top it off, Zara Phillips marked and goaled on the siren to finish the match.

It was a great Hampton Rovers Women’s victory and a now a spot in the Grand Final next week awaits! The details have been confirmed by the VAFA – same ground as the Prelim – Oval 3, Mentone Grammar Playing Fields (Springvale Rd, Keysborough), Sunday 18th August, 1:15pm start.

Thanks to Adam McNeil for timekeeping, Trevor Holden for interchange duties, Alex Roney for runner duties, Kellie Worrell and Harmoni Collins for running water, and our trainers.