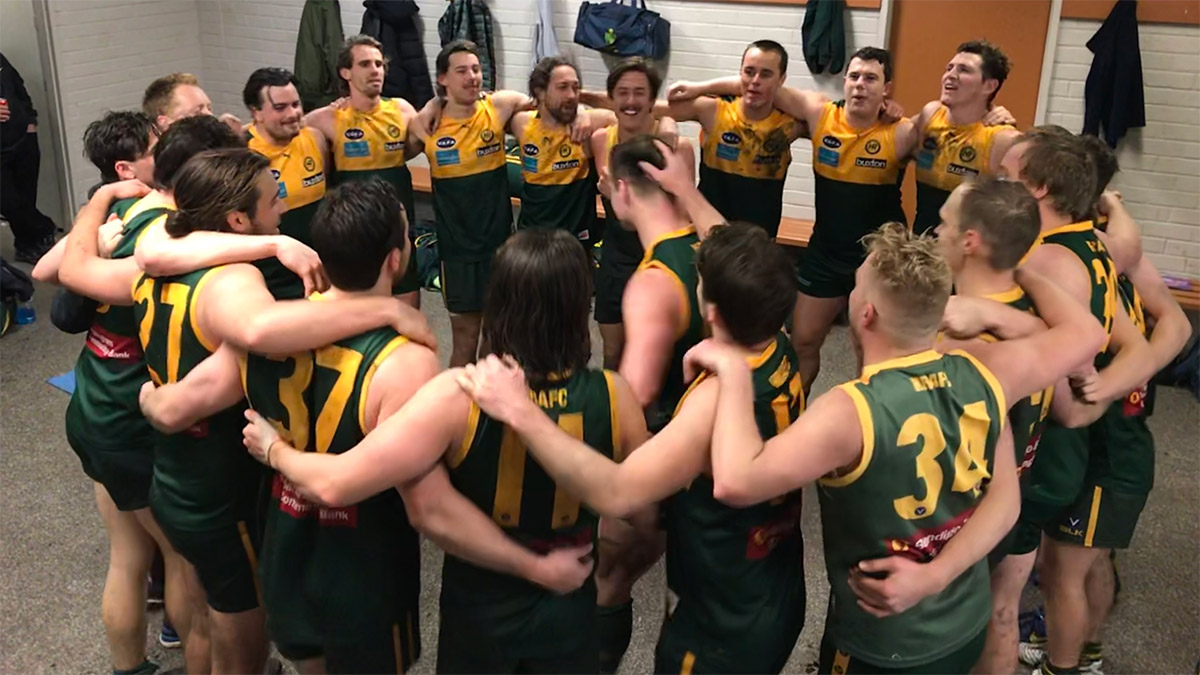 The Rovers Reserves entered round 15 against Old Camberwell with a win required to keep finals hopes alive.

As they say in the classics “it was a dark and stormy day” when the ball was bounced to open the game. It was wet and slippery but both sides actually handled the conditions pretty well with the ball moving end to end in fast play. The Wellers did however look to have the early upper hand scoring the first goal at the 10 minute mark after scoring a couple of behinds.  The Rovers backs were at times swamped by a surging Wellers midfield and forward line and hence managed to bring up their second with a scrappy off the ground kick.

The Rovers finally getting on the scoreboard via a point by Pavlou after a great mark by Lynch set him up with a chance. This was soon after bettered when Jones passed off to Zaina who marked and then with the familiar helicopter punt put it through the big sticks for the Rovers first major. Camberwell responded with another soccer goal at the quarters end to leave the scores Weller 3-5-23 to Rovers 1-1-7. The score didn’t truly reflect the game as both sides were pretty competitive, but Weller’s just had extra numbers in the forward line when it counted swamping a stretched defence. Lovig, Daley and Wood were certainly among the better players for the Rovers. The question in my mind was the wind a big advantage to the northern end where Wellers were kicking?

The second quarter was again a strong contest but this time the Rovers having most of the play for the 1st 10 minutes but mostly in the dead forward pocket where the wind pushed it across. Finally the nexus was broken with a quick forward entry where Donald kicked perhaps the goal of the day with a good snap from the said deep dead pocket. Donald was again in it when awarded a somewhat lucky free and got it quickly forward where Gallagher somehow got a toe on it to soccer it through. I’m not sure he even meant it but the celebration said he did!

Lovig was again very handy in the ruck and Ballard was getting plenty of it in the quarter. Jacko was playing well and had a couple of chances but couldn’t quite squeeze his shots between the big sticks. The Rovers were clearly the better side for the qtr and very stiff not to get another goal when an obvious free was refused in the goal square. At the break it was 3-5-23 apiece as the backs well lead by skipper Jewell and Lynch kept the Wellers scoreless. At the major break it was 13 scoring shots to the northern end and 3 at the other so it did seem the wind was affecting the game.

The 3rd quarter continued the wet conditions and it was getting the ball forward anyway possible with “urge and surge” the order of the day. Finessing was crazy but hard at it bodies demanded. Daley setting a great example with his physicality, Murnane was productive while Clarke and Shem were good contributors. It really was a tribute to both sides to be so competitive in pretty bad conditions. Gallagher got the sole Rovers goal via a free kick but importantly the mids and defence held Wellers to only 1 scrappy goal (again off the ground) despite kicking to the scoring end, putting the Rovers only 1 point down at the last break. Rovers 4-6-30 to Wellers 4-7-31.

The last qtr starting relatively well early for the Rovers when Ballard topped off a long run through the middle and then banged it through a goal to give the Rovers the lead. But to keep the suspense Wellers weren’t giving in and responded immediately with (yes, yet) another soccer goal to take back the lead. And so the surge and urge continued for the next 10 minutes. Both sides hard at it although the unforced errors were starting to count against the Wellers and the Rovers were just a little more polished.

Finally Donald was on the end of play deep forward with his own soccer goal. Then followed up immediately with number 3 for the day when he was set up with chest mark at CHF via a beautiful pass from Zaina bursting out of the middle. With a 2 goal lead the game was up but the Wellers didn’t stop and crashing bodies from both sides meant the contest remained fierce to the end. The sun finally came out and Huggy got his goal for the day with another slippery soccer hot killing the game off for good to the Rovers advantage.

The final siren confirmed a solid 28-point win for the Rovers.

Next up, the Rovers journey to Ormond (4th on the ladder) who are locked on equal points with the Rovers. A critical (8-point) match for both sides with number 4 spot on the ladder up for grabs to the winner.