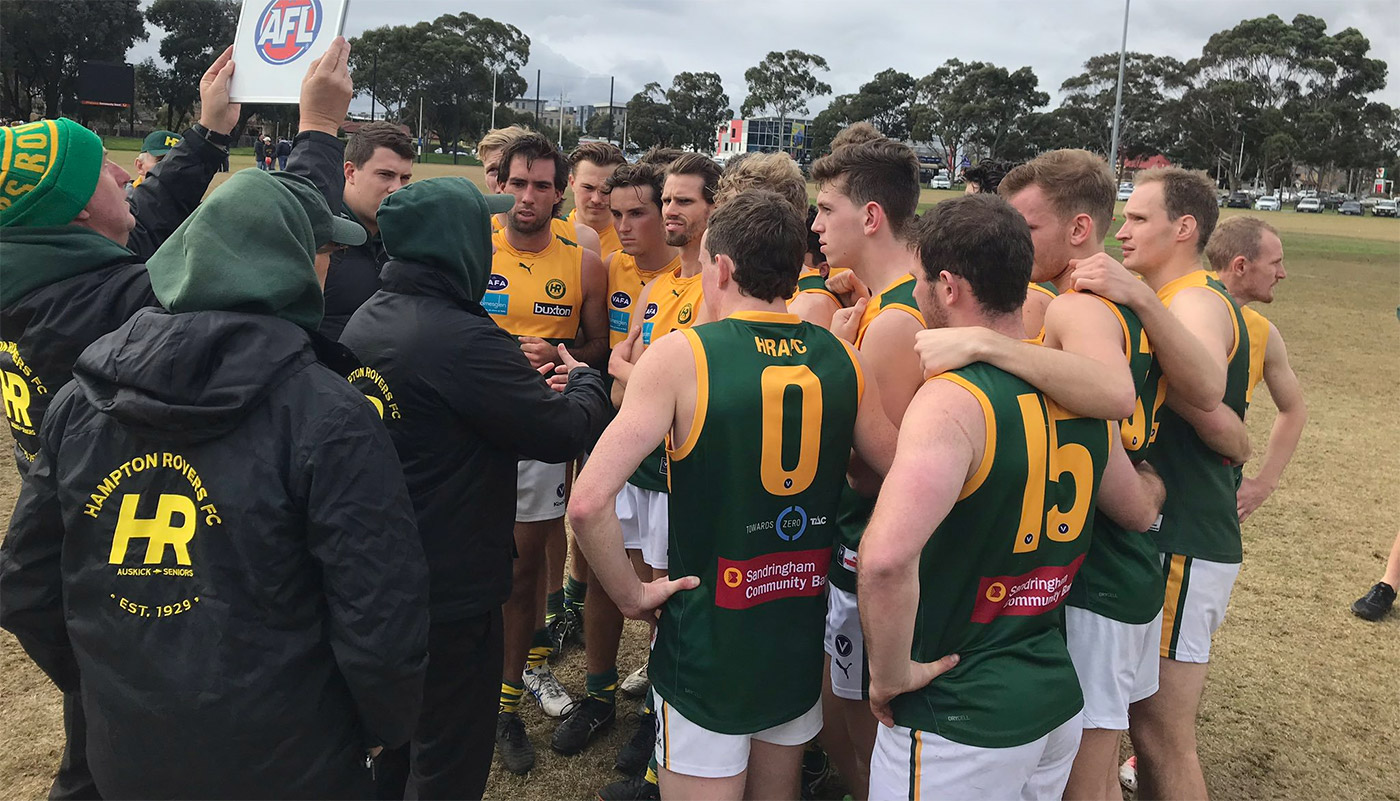 The Rovers were undermanned on Saturday, and faced a Mazenod side who had been in good form, on their home deck.

Hampton were on the back-foot early on, losing new recruit Eoin Culligan prior to the game and then Jesse Donald and Harrison McIntyre in the opening minutes, further weakening a side that was already undermanned.

The Nodders had recorded wins in the last couple of weeks and are fighting for a top-four finish. While the scoreboard wasn’t telling the tale early on, the home side seemed to be all over the Rovers, moving the ball faster and more accurately, with Hampton on the back foot.

Danny Corp was again the Rovers’ best, he presented well but the poor disposal of the young Rovers left something to be desired.  He kicked the Rovers only goal for the first quarter – a bullet pass from Scott Ebbott to his lead. Josh Broadley was winning in the ruck but the midfield was sloppy and the Nodders controlled the clearances.  Down back, Ben Kneebush was marking well and his accurate disposal was a feature. Rory Lynch had a big job on a couple of classy forwards but was holding his own.

In the second term, the floodgates seemed to open and while the opposition kicked another four goals to Rovers’ one to half time, Hampton were not out of the game.  The goal from Dylan Melnjak, in his first game for 2019, was the result of some slick teamwork.  At the other end of the ground, Joel Melnjak was going from strength to strength and his marking, run and delivery were sensational.  Harry Crisp, on one leg for most of the day, had certainly bulked up during his overseas travels, but had lost none of his judgement or speed.

As was the case last week, the Rovers came out after half time on fire. To the 24-minute mark of the quarter, the boys had outscored Mazenod, even though they weren’t rewarded on the scoreboard.  Harry Hodges came into the game and his creativeness and speed were causing Mazenod problems.  Jacob Grey had been working hard all day running the lines but had not been rewarded for his hard work.  The coach singled him out at the final break for the good work he had done.

Brendan Culvenor was active on his wing and put in his best game in the seniors for 2019.  Big Charlie Miles was using that frame to advantage and whether in the ruck or up forward was making space for our forwards.  Still it was the simple mistakes that were cruelling the scoring chances and letting the opposition in for some easy goals.

The final quarter was a no contest.  The Rovers went hard for the first 10 minutes, Nick Murnane goaled from a coast-to-coast play and when Sam Bradford goaled on the run from 50m, the visiting supporters had something to cheer, but that was short lived.

Great to see Hodgy goal from a free, and on the siren Aaron Wood, in his second game after 8 weeks overseas, snap truly on the bell for his first goal in the seniors.

A tough 77-point loss against Mazenod, after defeating them earlier in the season. Back then, the Rovers probably fielded their best team of the season while the opposition were struggling with unavailability. This time around, they’re flying, and the Rovers had a host of unavailability’s – including both captains and the entire leadership group, with just a handful of players in action who played in the Grand Final last year.

A few of those players will return this week in what is a crucial game against second-last Old Camberwell. The Rovers simply must win to starve off the possibility of relegation.

It was a similar story in the Reserves, also struggling against Mazenod.

With a win needed to keep the finals push alive, it was a bright opening for the Rovers with early clearances and goals to Clements and Fisher from strong marks in front of goal with less than 10 minutes on the clock while Mazenod had failed to score. The middle of the first quarter then became a strong contest of will between both sides. The footy was hot, lots of tackles the ball bobbing about with each side struggling to then get clear. Mazenod though finishing stronger in the dying stages with 2 late goals and a few points resulting from them beginning to dominate the air and with good ball transfer. At quarter time the game looked in the balance.

From the start of the 2nd quarter, Mazenod continued their growing good form and again were able clear the ball and then with good passing give their forwards great access to the ball. Meanwhile the Rovers just couldn’t string together good team play. Often putting each other under pressure creating turnovers to Mazenod’s benefit.

That really was the story for the remaining three quarters. Mazenod stray shots at goal limiting the damage somewhat. While the Rovers kicked their first two goals in the first 10 minutes they could only convert one more in the next 90. Mazenod were just too big and slick on the day. Clearly, the Rovers have some players to get back and so we put that behind us and focus on next week’s winnable clash.

Due to the number of unavailability’s this week, the Thirds unfortunately had to forfeit against Chadstone.

The Under 19s recorded a strong win against PEGS away from home – read the report.

While it was an historic moment for the club at Boss James Reserve, with the Senior Women winning their Semi Final against Oakleigh – the club’s first ever women’s finals win in the VAFA. They now progress to the Preliminary Final this Sunday at Keysborough. Read the full match report.