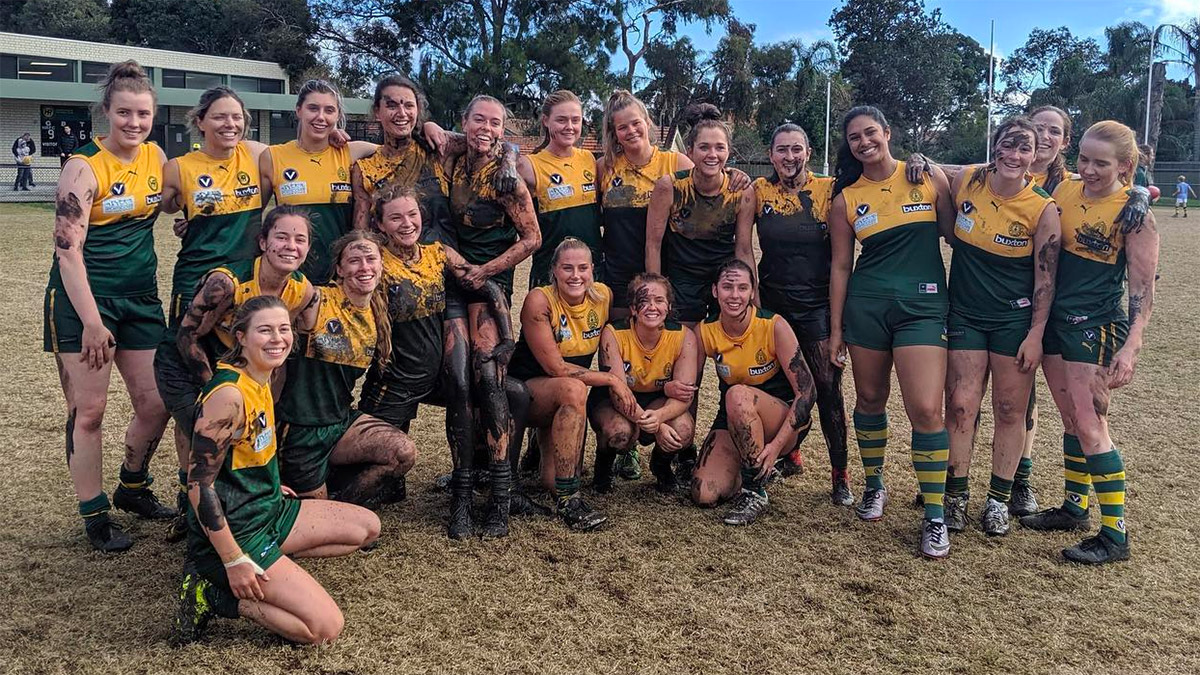 The Hampton Rovers Women took on Prahran Assumption at Castlefield in round 10 of the 2019 season on Saturday.

The conditions were quite slippery, and the centre square was a muddy gluepot so it was looking like it was going to be a low scoring scrap.

We were really keen to ‘turn the tables’ against Prahran, as in the first round it was one that got away when Prahran beat us by a solitary point!

‘Let the game begin’ as we’ve got ‘Some unfinished business here’, you could sense our girls feeling!!

At the start of the game our girls were under real pressure by Prahran, however Chloe Mirams was able to hold them off with a great overhead mark and desperate work in defence. Then Dev put her body on the line followed by Kaitlyn’s awesome tackle and a smother, she soon followed with a snap for a point and the first score of the match.

These great efforts seemed to ignite the Rovers into action as they gained in confidence and started to take the game on.  Kristy was coming off the backline like a steam train and giving us opportunities with her driving kicks into the forward line.

Grace was in everything and Natasha was really playing some really inspiring footy. Mandy was continuing her great form for the whole season, we were concerned that she may get ‘leather poisoning’ from getting the ball too much!

The Rovers were peppering the goal until ‘Hursty'(Tarryn) took a strong pack mark and converted with the first goal of the match and only goal of the quarter.

In the second quarter we started to dominate the game. Prahran were still giving a great challenge but we just seemed to want the ball more and were more desperate in each contest.

There was a quick opening goal to Rovers.. so quick that I missed it and who kicked it! Sorry! Not long after, following an awesome shepherd by Mandy, there was another big forward line mark, this time by Harmoni who calmly went back and slotting our 3rd goal.

Prahran were still getting the ball forward but Megan wasn’t about to let anything past her as she worked really hard to keep possession.

Kate and Jaimie were both having awesome games and Bianca’s was asserting her authority around the ground with her marking and amazing ruck work.

In the 3rd the game started to open up and Kaitlyn got our first goal this was followed by another by Zara. Then we got another 2 later in the quarter when the mercurial Taylan Merrick put on a ‘skill show of brilliance’.

The team was getting fantastic work through Lucy on the backline and Kellie was having a great match also.

Bree continued to dig under the packs to win the ‘hard ball’ out for the Rovers, she just didn’t stop giving her best effort for the whole game.

The Rovers were now really in control of the game but to the credit of the team and coaches we didn’t drop off our intensity and desire to win every contest.

Tarryn and Harmoni added another goal each for the quarter. Fran finished a very good game with some nice footy and Stacey showed no fear going in to get the ball on numerous times.

The game ended with a 10 GOAL WIN to Hampton Rovers Women, with the team remaining in third position on the ladder with three games remaining in the regular season.