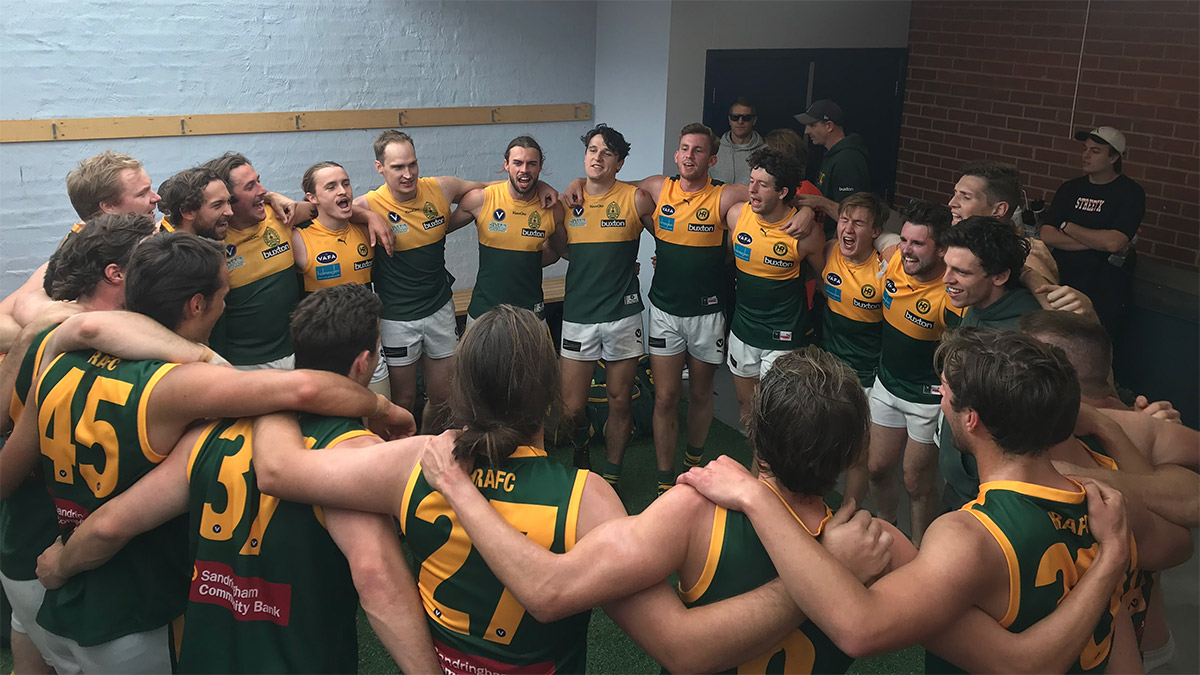 It was one of the best victories by a Rovers Reserves side, turning around a four-goal quarter time deficit to defeat Old Ivanhoe on their home deck.

With only a game separating both teams on the ladder, what many saw as one of the strongest Ressies sides they’ve seen in recent years, and Old Ivanhoe undefeated on top of the ladder with 260%, it promised to be a great hit-out.

The first quarter opened with a flurry forward by Old Ivanhoe from the centre, a couple of contests and then a kick off the ground in the goal square and they had goaled within the opening minute. Not quite to Hampton’s plans!

The Rovers then responded by having the ball in their forward half for the next 12 minutes, but the ball was hot, the tackling hotter and smothers boiling, and they just could not force through a goal. Merlo took 2 very strong marks but alas he must have left his kicking boots in the wardrobe as both shots at goal went wide. As often happens the first clearance by Old Ivanhoe resulted in a very open forward line being given great delivery and they had goal #2.

The game then opened up a bit and the home side suddenly clicked with great handball use – often a string of 4 handballs to clear the packs and away they went into a very open forward line with hard leads and great passes. The poor Rovers defence had little chance resulting in 2 more goals to Old Ivanhoe and none to the Rovers. It started to look like a rout in the making. While the Rovers had as much of the ball, Ivanhoe simply found the space with clearing handballs and hard running while the Rovers couldn’t get clear air. The wind seemed to have a swirl factor on the ground slightly favouring Ivanhoe’s end. At the first break, Old Ivanhoe led the Rovers 4-2-26 to 0-2-2.

Early on in the second term, the first foray forward by Hampton ended with a free to Jacko for holding and he duly converted to record the Rovers first goal. Immediately at the next bounce, Lovig great tap out hit a Rover and following a string of good clearing handballs it was in Zaina’s hands to kick long deep forward where Innes strongly marked and goaled. Ditto next centre clearance but this time CJ on the end of the handballs who kicked long to Innes for his second mark and goal.

The Rovers were back and pretty much on top. CJ opened his goal account after being on the end of an unselfish pass from Naha and Gallagher opened his account bursting through a couple of tackles. Notables for the quarter were Lovig with his ruck work and marking and the Duck with great clearance work through traffic. The Rover mids somehow tightened up Old Ivanhoe’s spread and smothered them out of play. Of course, the backs were on top restricting the limited Hoers forward entries to only 1 point. At half time, it the Rovers leading by one goal.

The 3rd quarter started well for the Rovers where Cairns somehow found time and space when there was none, in a congested pack to pick up a bouncing ball and kick a goal in the first minute! But then Old Ivanhoe responded with a goal 1 minute later from a free kick. Jacko was off injured for the rest of the day and a turnover gifted Old Ivanhoe a second goal to put them a point up. But the Rovers were gallant under adversity and the backs held strong at the Tiger snake scoring end. Despite being one short in the forward line, great support from the Rover mids did get the ball forward enough on occasions to allow scoring opportunities. The first converted when Cullis was rewarded a free for a great tackle, kicked long deep where Gallagher handballed in traffic to CJ who goaled to give the Rovers back the lead.  Special mentions for the quarter to Garrow, Ballard, Murnane and McCartney providing plenty of run and carry from the backline through the middle. At the final change, it the Rovers leading 7-3-45 to 6-6-42.

With only a 3-point lead to the Rovers, it was anyone’s game. The Rovers had a couple of chances early, but points resulted increasing the lead to 6 points. Both teams were ferocious at the ball and the old one percenters were on display – smothers, tackles, fingertip spoils and blocks. With a goal the difference, the Rovers finally broke the nexus when Jewell gained a loose ball deep in defence, then with linking play the ball was suddenly forward where Stewart backed in his pace to break a tackle, sprint clear, then bounce to bring himself within range and goal. Very impressive!

Old Ivanhoe hadn’t given up though and the Rover backs were under some serious pressure but typical, Lynch was now displaying his trademark intercept marks to hold them up. With the Rovers 2 goals up, Naha’s read the play really well and intercepted an Old Ivanhoe play and when he got it to Cullis he kicked what looked to be the match winning point – 13points up! That was until a couple of minutes later when a downfield free kick to Cairns was handed to CJ who converted for sure make it a match winning goal! Old Ivanhoe battled hard but couldn’t then make any inroads on the lead. Well fought out by both sides.   Amazingly 13 goals out of 15 kicked at one end although there was no obvious gale that way.

The win sees the Rovers now equal-top with Old Ivanhoe on the Premier C Reserves ladder after 7 rounds.