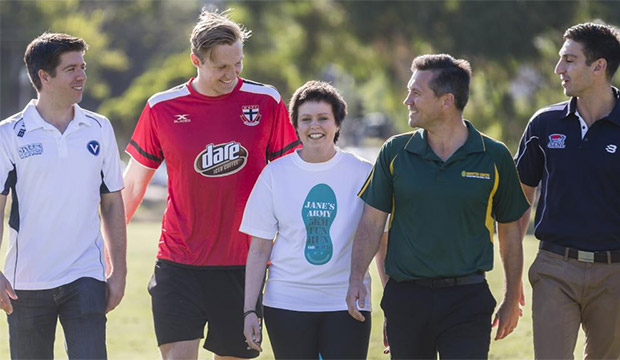 THE dates are imprinted on her mind.

Hospital on March 6. Diagnosis on March 7. Chemotherapy on March 8.

This time last year Jane Barnes was a healthy young woman, a keen netballer who prided herself on playing four strong quarters in the centre and a recreational runner who had completed three half-marathons.

“I was as fit as I’d been,’’ she reflected as she sipped coffee at a cafe near her East Bentleigh home.

Then she began to feel tired, fatigued. She could was unable to run out a netball game with her customary zing. She normally breezed through a 5km run but it became a struggle. She found sleep elusive.

A week later, in early March 2016, Jane and her boyfriend headed to Wangaratta for a wedding.

An “awful’’ ache developed in her upper back and became so severe she had to present to hospital. No medication lessened it; some of it made her nauseous. Morphine numbed the pain while blood tests were performed.

The results were “a bit dodgy’’, Jane, 26, said. The local hospital arranged for her to be taken to The Alfred, where she was met in the emergency department by her anxious parents, Russell and Jude.

More tests followed. “I had so many cannulas and needles going into my arms they pretty much ran out of veins before they put in a Hickman line,’’ Jane said.

The results flattened the family: she was suffering a rare form of leukaemia, a mix of AML (acute myeloid leukaemia) and ALL (acute lymphoblastic leukaemia).

Jane was familiar with the blood cancer only through the book Sadako and the Thousand Paper Cranes, which she’d read at primary school.

“I wasn’t expecting that all,’’ she said. “Like I said, I was super fit. I did a half-marathon the October before and I’d kept training. Yeah, super fit …

“My attitude was, what the doctors had to do, just do it. I didn’t really question it. Time’s very important with leukaemia. I had to start treatment the very next morning. The one they gave me showed very quickly it wasn’t working so I started a new treatment that worked straight away. There was so much going on, so many things going through my head. Coping-wise, it was something like Dad calls the ‘Barnes mentality’, do it and get through it’.’’

Jane went into remission after the first round of medication and continued with chemotherapy.

A bone-marrow transplant was planned for June. A search of the world database matched her blood type to a 28-year-old German woman. It amazed Jane that someone she didn’t know on the other side of the world would be giving her such vital help.

The transplant was an ordeal. For 28 days she was isolated in a room, with only her parents and boyfriend permitted to visit. Towards the end she blurted out: “You’re all lying to me. I’m never going to get out of here.’’

She did. But the treatment was less successful than everyone hoped. “We got to day 100 post-transplant, which I seen as a big day in the bone marrow transplant world. I was 100 per cent German, meaning that the German donor was making 100 per cent of my blood. Then slowly it started to drop off…’’

The leukaemia returned, a blow considering the transplant had been regarded as a “safeguard’’.

Last November Jane began a new treatment, a world-first trial of injections and tablets involving two drugs that had been used separately but never together in the fight against leukaemia.

She hates needles, but seven days out of nine they go into her stomach, producing large, purple bruises on her skin.

The trial will last 24 cycles, each lasting 28 days. But she feels she’s getting better and after two months of the trial she was back in remission. Tests last week showed less leukaemia in her body. She’s grateful to have kept her hair with the new treatment and to be back driving her car.

Around this young woman has grown an army of supporters, “Jane’s Army’’.

The Barnes family is well known in football circles in the southern bayside area. Jane’s father is a legendary former Ormond player and VAFA coach, and her brother Michael won a Sandringham Dragons best and fairest and is now at St Bedes Mentone Tigers. Her uncle Steve coached in the old VFA, is a life member of the Southern league and seems to know anyone who has pulled on a boot. And her cousin Heath was a champion player at St Paul’s East Bentleigh.

“Jane’s Army’’ will do a 5km run or walk at Boss James Reserve in Hampton on Sunday, April 2.

Hampton Rovers Football Club is hosting the event and all money raised will help Jane with her ongoing treatment, the Alfred Hospital and Maddie Riewoldt’s Vision.

Jane said she had been overwhelmed by the support, from family, friends, her medical specialists and the local football community.

“It’s helped me a lot. It can be a bit up and down, going through this. This week is hard because it’s a year on. I keep thinking back to what it was like this time a year ago and I guess who I was and what I’ve lost.

“But the support has been amazing to help me get through. It’s what I’ve got to do, because I’ve got things to do. I’m only 26. I’ve got a lot of living to do.’’

■ After an interview with the Leader, Jane Barnes sent a text asking if she could encourage people to donate blood and consider joining the bone marrow registry to “help give someone hope’’ (her brother, John, 20, the baby Barnes, is doing just that).

“Raising awareness of the registry is very important to me now,’’ she said.

The Hampton Rovers Football Club has had an association with the Barnes family over many years with Jane’s father, Russell, a former senior premiership-winning coach at the club.