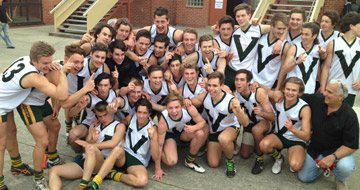 Round 17  GRAND FINAL
5 Games clear on top with % of 396
Minor Premiers
Undefeated all year.
PREMIERS DIV 1
What a record

This is a year that was; the boys grouped together, went through the highs and lows, and got through with a clean slate, impeccable.

No reports, no misdemeanours, no issues.

The U/17s just went on doing what they do best, playing a good brand of Football.

Its amazing how things pan out, we had a list of 30, and had games were we could only get 16 on the field, and yet Grand final day we managed to get everyone bar Tommy G, that still was present on the bench, to be on the ground.

The day started slowly, it was evident that players were nervous; this is what we had strived for,
some didnt have too much to say, some just wanted there own space. All players prepared themselves in different ways.

It was game time, everyone stood to the national anthem, arms wrapped around each others waists, you could feel the passion, the boys have for one another.

Formalities over, it was time to bounce the ball, first 5 or 6 minutes, saw scrambled play, that is what one would expect.

The Rovers got the first on the board, by Lachie, a ripper run into goals. The Bears had come to play they were chipping the ball around, we were doing all the chasing, not manning up, and playing undisciplined football.

The coaches got into the boys, asking them to lift, and go back to basics, their game plan was not going panning out, the way the coaching staff wanted it too.

The second quarter saw us play a little better, but the Bears were very good at chipping and closing the game down. The other issue was that the Rovers had 12 boys on the bench; the coaches were trying to give everyone a fair run.

Our forward Tom Nicholls finally got a major after kicking 3 behinds. Followed by a quick reply from the Bears. We just couldnt shake them off. Shredder bagged one in the dying minutes prior to half time to put the Rovers up by 2 points at the main break. Rovers 3.4.22 v Bears 3.2.20.

It was lock out time in the rooms Toouli wasnt happy, how could we let a team like Caulfield be so close at this point in the game. We were playing undisciplined football.

Deluca and Garner were shuffling the board, and the coaching staff strategy had to change. The best team needed to be put on the ground for the 3rd quarter, so we could get some rhythm into our game. We were interchanging players every 8 minutes to try and give everyone a fair go, in the previous half and that just wasnt working.

We were also missing Jack who was concussed from a fierce head clash.

The third saw us play a better brand of football, with Cheesman, Macleod and Fisher shutting down their forward line, nothing was getting through. Clayton and Elston kicked one each, and the Bears could only convert one point. Rovers 5.7.37 v Bears 3.3.21. We began playing our brand of football.

It was our premiership quarter.

It was all done and dusted when we got the first in the last, by Hewett, and then Verma, so we took all the 3rd quarter team off. It was an amazing sight. The bench read, Clayton, Balleggi, Verma, Slater, Macleod, Garner, Nicholls, Toouli, Avis, McPherson, Weatherby and Fogarty.

At the final siren the Bears could only score 5 points in the second half; we shut them down, to bring the Silverware home by 26 points. Rovers 9.7.51 v Bears 3.7.25.
What a game, what a finish to a great season.

The celebrations went well into the night with Seb being best on ground at the after party, and two families tied in second place being the Fishers and Balleggis.

It must also be noted, that the coachs have been seen out, every single night this week celebrating, with there coaching staff, supporters, club committee members and anyone who wanted to join in.

The Cup has been sighted in 3 different waterhole establishments around the Bayside precinct.

Give it up fellas, 6 nights in a row, its meant to be about the kids.

Please remember that we have the premiership best seller DVD available from Michael DeLuca, and premiership printed jumper organised by Chris Toouli.

Best Players:    An amazing feat, we got 29 players all on the field, and all got B.O.G

Thanks signing off for 2013