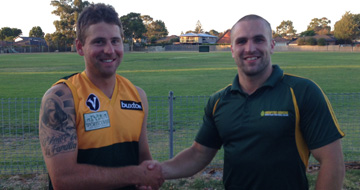 On the eve preseason recommencing, Hampton Rovers FC have another huge signing, with former Best & Fairest winner Mark Cracker Devereaux confirming that he will be back in the green and gold in 2013 and beyond.

Devereaux joins a long list of players who have returned to the Rovers to play under Guy Martyn in his debut season as Senior Coach.

In 2012, Devereaux joined the Hasting Football Club in the Mornington Peninsula League. In his only season with the Club, he finished runner-up in the senior Best & Fairest after playing only 12 games, and was voted Player of the Year by the Clubs Committee.

Devereaux is looking forward to getting back to the Rovers to play alongside a number of his great mates.

When Marto (Guy Martyn) mentioned that he was applying for the coaching job, I was rapt; he is one of my best mates! He got the job and then Corpy (Daniel Corp) committed, so the opportunity for the three of us to be back together at the Club we love, I couldnt pass it up. I think weve got a huge opportunity to win a flag, and thats another reason Ive come back  to help win a flag for the Rovers.

In the lead up to the 2013 season, Devereaux has had multiple offers to play with clubs throughout Melbourne in various leagues, but refused these, passing up significant financial offers, to come back to the Rovers.

Martyn said that the addition of Devereaux will further add experience to the mid-field, which will include young guns who have cut their teeth in senior football over the last couple of seasons.

Cracker is a quality player and his solid frame will give Fletch a good chop out in the mid-field. He is really competitive, so I think the young list will learn so much from having a guy with so much determination in the team. He played in the Mornington League last year, and he really led the way and stood out in whats a pretty solid competition.

In further signings, former Rover Luke Dallas has also committed to playing again in 2013. Dallas has played 132 games with the Rovers since 1997, including the 2007 and 2008 Grand Finals. Like Devereaux, his experience will be welcomed. Dallas is a composed player, with solid hands, pace and his long kicks always know how to find their way through the big sticks.

The Hampton Rovers are thrilled to have both players back to the Club, where they both share a long history. During their time at the Rovers, both have been great supporters of the Club off the field as well as on.

Training kicks off on Wednesday 30th January, meeting at Boss James Reserve at 6:00pm. New players are most welcome to come along and get involved in what is shaping up to be an exciting season. Click here for details >>