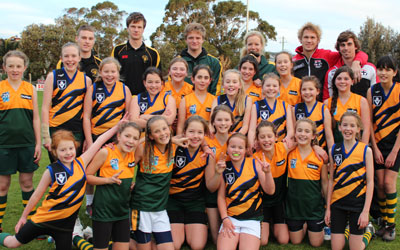 The Hampton Rovers U12 Girls team prepared for their half-time Etihad Stadium game with a special training session on Thursday, featuring players from St Kilda and Sandringham Football Clubs.

As part of AFL Womens Round this weekend, the girls will participate in a game at half-time of the Western Bulldogs v Carlton clash Saturday evening at Etihad Stadium.

The girls are super-excited to be playing in front of a big crowd during Saturday night’s match. The half-time game will be the first girls match played during an AFL game featuring suburban footy clubs.

The excitement has led to many other girls expressing interest in playing AFL footy and participation levels have increased throughout the year.

Junior girls footy, especially in the southern region, has exploded in popularity over the past two years. What started as nothing more than an experiment in 2011, has developed into a fully fledged league administered by the SMJFL and featuring three age divisions in 2012.

The Hampton Rovers girls team is coached by Jo Adams with Sam Gilbert and Jack Campion assistant coaches. Felicity Frederico, team manager, has been instrumental in the set-up of not only the Rovers team, but junior girls footy as a whole and has also played a big hand in getting the girls playing on the big stage. The concept has also been well supported by Junior President Brett Yorgey.

Also a big thank-you to the St Kilda Football Club and Sandringham Football Club for their involvement in Hampton Rovers girls footy.
Click Here to view the article on Saints.com.au

For more on AFL Womens Round, visit www.afl.com.au/women

The following feature appeared on Channel 7’s half-time show during the Bulldogs-Carlton game: