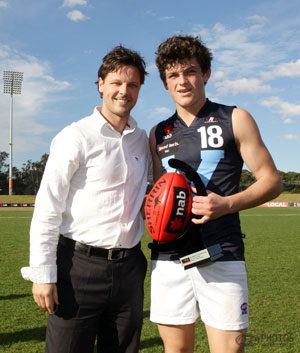 Hampton Rovers would like to congratulate Angus Brayshaw on his selection in the Victorian Metro U16 team which competed in the national championships recently.

Vic Metro along with Vic Country, SA and WA formed the division one level of this prestigious competition.

Angus not only represented Vic Metro but also won the MVP for his side during this carnival which is an enormous effort. Add to this his All Australian selection last year and we start to see that Angus is looking at a very bright future at the top level.

While Angus has had limited time at Hampton Rovers these days due to school and Sandringham Dragons commitments, his brothers Will (Seniors), Hamish (U14s) and Andy (U13s) all play at the Rovers.

The Brayshaws are a great Rovers family with Mark and Debra participating in a variety of roles over the last 10 years with Mark currently chairman of the HRAFC Board.

Well done Angus and all the best for the future from everyone at the Hampton Rovers Football Club.

The club also congratulates Christian Salem who represented Vic Metro in the U18 Vic Metro side that won the 2012 championships. Full Story >>