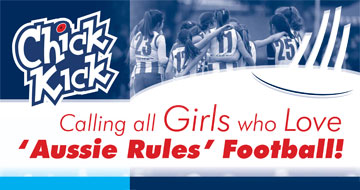 From the Bayside Leader

IT was Chick Kick day at East Sandringham on Saturday, with girls from across the South Metro Football League including Hampton Rovers putting boot to ball and signing up for competition.

Victorian Womens Football League star and Melbourne Football Club womens ambassador Kara Donnellan was on hand for mini-matches and clinics, and registrations were taken for the South Metro girls Under 10 competition beginning on June 23.

Seven clubs and 12 teams were involved.

This year we have extended girls footy to Under 14, Under 12 and Under 10 competitions, SMJFL general manager David Cannizzo said.

We have been very strong on participation and enjoyment.

All the girls train on the same night, we have a group of coaches who make it a fun night while they learn, and we provide the same rewards and awards to the girls as we do the boys, Mr Hine said.

We dont see girls footy any differently than we do the boys, and having the girls join the club has given it a much improved dimension.

Hampton Rovers have an U12 team in the 2012 SMJFL Girls competition.