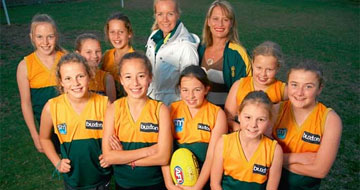 Girls’ footy is exploding in the City of Bayside, and at the Hampton Rovers Football Club its shaping up to be the biggest season yet.

The Rovers will field up to three teams and has St Kilda star Sam Gilbert on board as an honorary ambassador, helping the girls at training when hes free.

My daughter is 11 and played with them [Rovers] last year, team manager Felicity Frederico says. It was such a great success that we were really keen to get it up and going again.

The important thing about girls footy is that it gives them the opportunity to play on an even playing field.

Frederico says the shift towards more girls playing football has seen them move in on a sport that was previously the domain of boys.

I remember last year seeing more girls going out and playing on the ovals at schools, which was interesting, she says. I thought it was great, although the boys didnt think so; they thought the girls were moving in on their territory.

Frederico says girls footy competitions have given girls an opportunity to be involved in areas traditionally unavailable to them.

Theres not a lot of sport options for girls outside of netball, dancing or gymnastics. Now girls can legitimately use these resources.

Frederico is keen to put parents minds at ease about the suitability of football for girls. Its a shorter season for the girls, only about eight weeks, she says. So parents dont need to worry about this being another season-long commitment. Its also only $50 to register, which is significantly cheaper than it is for boys.

There are 15 to a side and modified rules, she says. Its all about being supportive and teaching them the skills.

Theres no best on ground or anything like that. If coaches or parents want to come out on the ground and give some pointers theyre allowed. Its all very relaxed.

The key message is learning new skills and developing team work. As an observer it can be hysterical to watch. It was very funny last year.

Frederico says Gilberts role will help raise the profile of girls footy. We are just delighted he has come on board, she says. St Kilda thought it was a great idea and hes actually a qualified coach  hes even coached a girls team before, on the Gold Coast.