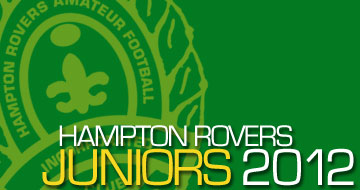 The Hampton Rovers Football Club would like to announce that Brett Yorgey has taken over as Junior President after Phil Bourke had to relinquish his role due to work commitments.

The club would like to sincerely thank outgoing Junior President Phil Bourke for the input he has had to the junior section of the club over many years. Phil started with his boys in Auskick and quickly took on the role as coordinator of the Auskick program. Following a few years coordinating the Auskick program the boys moved through to the junior club and Phil became involved with the committee. He has been President for the last 2 years and has put in place many new initiatives that will help the club evolve into the future.

With work commitments changing over recent months, Phil has unfortunately had to relinquish this role so once again the club would like to thank Phil for a job well done and wish him all the best for the future. He will continue to have involvement at the club including once again looking after online junior player registrations this year.