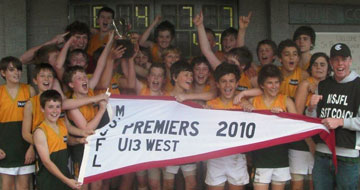 The Hampton Rovers U13 West side, coached by Rovers senior players Jesse Lovig & Ed Turner, stormed home after a slow start to the year to claim the premiership over East Brighton on Sunday.

At two wins and five losses, sitting on the bottom of the ladder at the halfway mark, the season looked all but over for the Hampton Rovers Under 13 West team. With vital players such as Mitch Foss, Nick Pavlou and Guy Mcpherson succumbing to injury such as back problems, broken ribs and dislocated shoulders, coaches Jesse Lovig and Ed Turner felt like they were coaching an AFL team rather than an under 13 squad.

When the boys turned up to play Highett in a bottom of the table clash in round 9, no one expected the turnaround that the Rovers boys were soon to experience.  With a strong forward line of Luke, Dec R, Lloyd and Corey beginning to fire and the ball being sent inside the forward fifty time and time again the goals started to flow. Rovers won the game by 21 points and things only got better from there on in.

With Lauchie McPherson up forward kicking four goals plus a game and with Connor, Jack N and Jack P delivering with precision to him time and time again, the winning form continued and the winning margins grew. Jesse and Ed could only stand and applaud as smaller units such as Robbie, Aaron and Dan put their bodies on the line in every contest for the team. The team went on to win their last 6 matches of the home and away season and sit 3rd behind Prahran and East Brighton needing three more on the trot in order to win the Premiership Cup.

With Mitch M, Ronan and Carter using their pace and Lauchie, Corey and Mitch kicking bags the first final was a walk over from a far improved and superior Rovers outfit. The boys were reminded by Jesse and Ed not to get complacent as the task promised to be much tougher against Prahran the following week. However this was not to be the case as the ever reliable tall Rover backline consisting of Hamish, Harry and Chris easily accounted for their opponents allowing only 1 goal through for the whole game in a comfortable 40 point win.

The task looked ominous against the East Brighton team who had beaten Hampton twice through the season but with 8 wins in a row anything looked possible for this unfaltering Rovers outfit. The first half was a tight contest with only 3 goals being kicked and the boys went into half time behind by a goal. Jesse and Ed reminded the boys of the work they had done to get themselves there and when they came out for the second half the fairytale season was soon to find its happy ending.

With Matt S holding some big overhead marks, Dylan asserting his presence with some big hits and Dec M slotting through his first goal of the season the tide was turning. When Lauchie sent home a booming 50 metre goal to take his tally to four things looked sealed for the team. But when East Brighton got one back it took the cool heads of Mitch Foss and Nick Pavlou to steady the ship with a few telling marks and last minute heroics. The boys came away with a gutsy 9 point win which was typical of their never give in attitude that they had carried throughout the whole season.