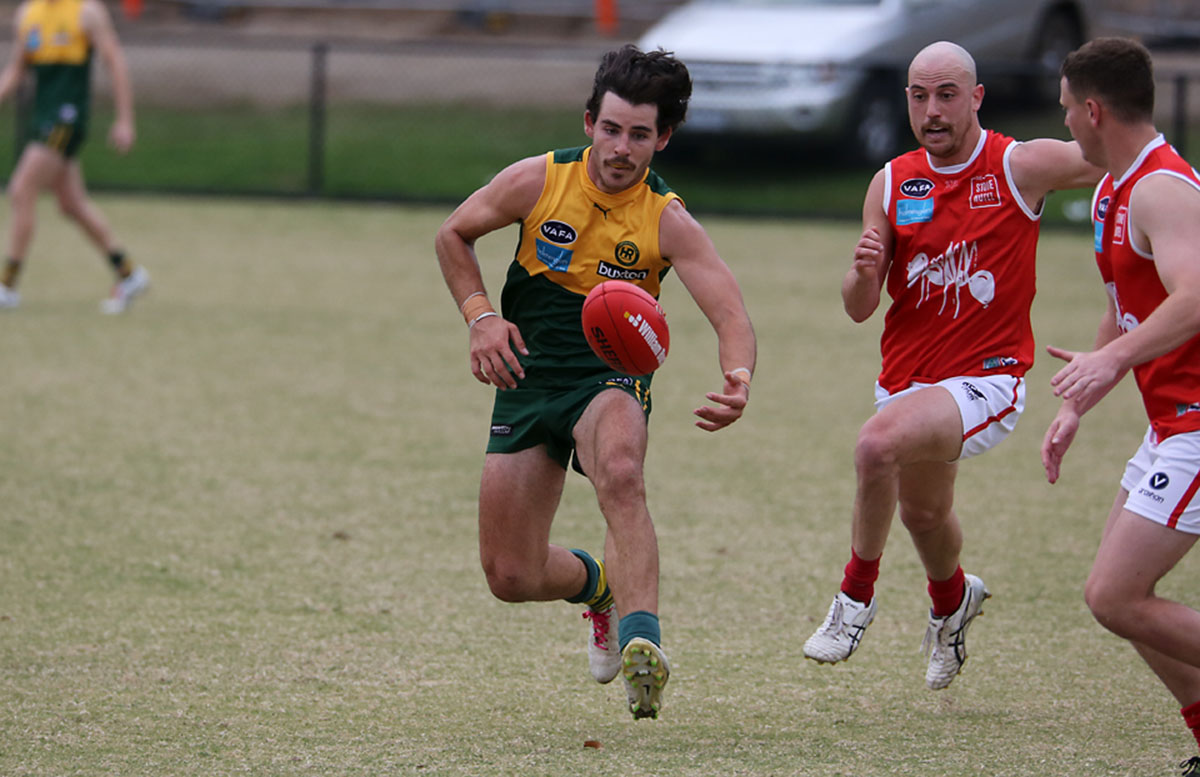 Following the bye last week, the Rovers made the long trip to Preston to face the Bullants in tricky conditions.

The Rovers were up against the bottom team in Premier C Men’s, with one win for the year, yet at the halfway mark of the first quarter, they had 3 goals on the board before Lachie Carrigan banged through the first on the run, against the wind from beyond 50m. The home team, not fussed, continued on their way and kicked another 3 to take a handy 5 goal lead to the first break.  Christian Carnovale seemed to be enjoying the fight into the wind with some strong surges, Danny Corp was running all over the ground, Dillon Melnjak took a couple of good marks and was instrumental in a number of forward moves.  While Hampton seemed to have most of the play, the wind was just so strong that scoring against it was close to impossible.

It was great to see Benji grab a couple of strong marks at the start of the second quarter and his pass to Dillon Melnjak for the first goal was a treat. Shortly after there was a scuffle and a free downfield to Corpy who didn’t miss. Corey Jones took a strong mark from a centre square clearance and his shot just missed.  The different-looking backline with VDS and Rich Atkins missing was holding firm and really Preston didn’t look like scoring.  In fact, they didn’t against the wind for the entire game.

Ryan Leslie was solid on a back flank and the boys were combining well with the use of the wind.  Max Coughlin put the pass on Pross’s  chest for an easy goal.  The quarter ended with Cougs flashing down the outer wing, gathering the loose ball at speed and banged it through from 50m – clearly the goal of the day.  The margin had been reduced to 4 points at the main break.  Perko was working into the game after a few weeks out and you could see him improving as the game progressed.

The third quarter was going to be the test.  A gale favouring the end the Bullants were kicking and they had been playing well.  In the first minute, Lachie Carrigan passed to Corey Jones and he kicked accurately.  It became a bit of an arm wrestle where the Rovers tried to keep possession of the ball with some clever teamwork while Preston tried to take procession and launch the long bomb forward.  Hampton had more of the play and the backs did a sensational job in nullifying the opposition’s forward moves.  Some great play by Harry Crisp and Ben Kneebush on the backline was making it hard for the opposition.  A free and goal to Andrew Woolston meant the Rovers went into the final break equal on the scoreboard with the benefit of the gale in the last.  The coach described the quarter as “a mature response” in what were very difficult conditions.

Hampton took over in the last quarter.  With early goals to Max Coughlin and Caggs, a beautiful banana from the boundary line, the Rovers hit the lead and when Harry McIntyre launched from the centre square, the kick cleared the pack and landed in the safe hands of Danny Corp waiting on the goal line. The backs weren’t pressed at all in the last quarter and the sealer came when Jim Keys was on the end of a number of handballs and popped it through to make the margin 25 points at the final siren.

Hard to pick best players in a day when all 22 contributed to the win.  At the post-game drinks where it was great to see the majority of the players present, the best on ground award went to Chris Perkins who, as usual, just kept running all day to win the award.

Next up, the Rovers return to Boss James Reserve to host Mazenod in an important game. Supporters are encouraged to book in for the pre-game Luncheon.

It was probably the Ressies biggest win for 2022 with our highest score and managing to keep the opposition to the lowest score against us.  Congratulations to Brendan “NaHas” Culvenor on playing his 150th game and great to see Lachie Cairns in a BOG performance.

An unusual Rovers team, Steve Anderson lining up with son Ollie and then a swag of senior citizens with Mick Flahive, Rupert Hunt and of course Lachy Wheeler who equalled Barry Bird’s club record for most games played! A fantastic achievement – more to come on this.

The boys started their final game of the season with a rush and at the main break held a brittle lead.  Unfortunately, the older legs ran out of steam in the second half and the Prahran/Assumption boys took advantage of the gale in the third quarter to bang on 6 goals to break the game open.

Good to see Darcy Merlo continuing his good form and 2014 U19 premiership captain Luke Morcom both in the best.

An amazing win for the Rovers Under 19’s when you think the boys have played Beaumaris three times this year. In the first two, Hampton lost both by over 10 goals in each game, the last loss only 2 weeks ago. This week, the boys come out and defeat them by 30 points!

This should be enough to guarantee them a spot in the finals and with a comfortable win against the second-placed side on the division 1 ladder, the boys would have to be confident of their chances!  The Rovers are two games clear of the 5th place team with both clubs having a similar run home.