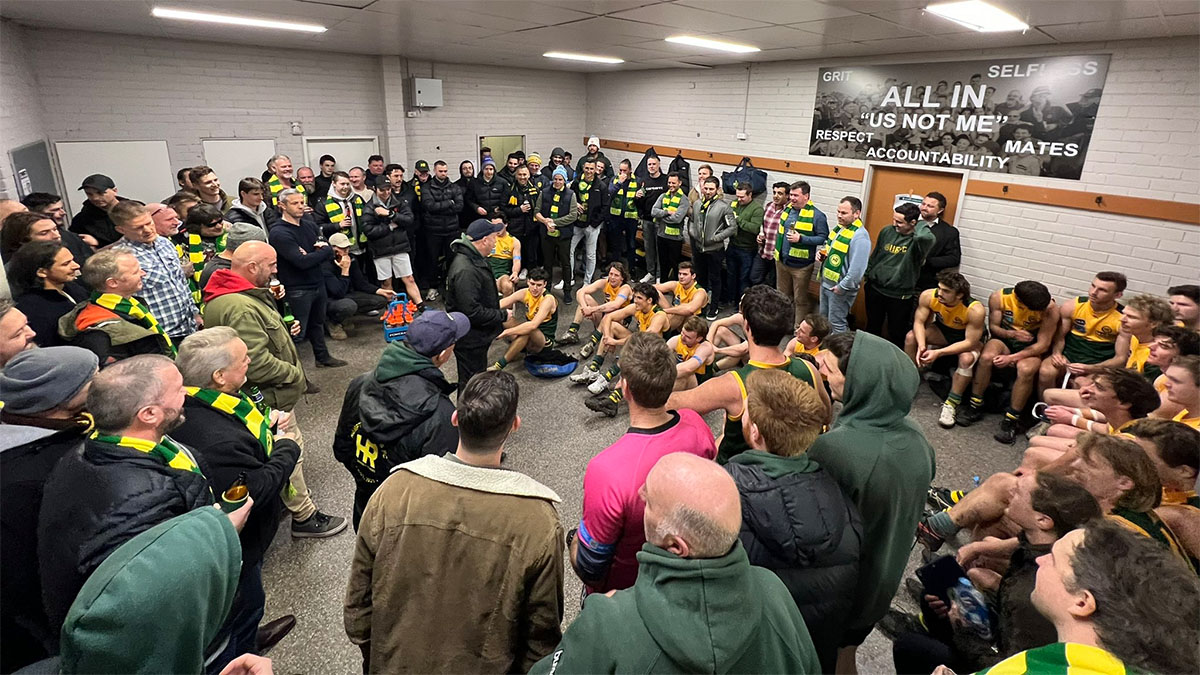 What a great day at the Boss on Saturday, with all Rovers teams getting the win including the Seniors over arch-rivals Ormond, witnessed by many past players in attendance.

It was sensational scenes in the rooms following the victory, with past players who had attended the sold-out luncheon, swamped the change rooms and joining in the singing of the club song with the boys. Loud and proud!

Over 120 people were in attendance for the home game luncheon, including many past players, with another great meal put on by the caterers in what is without doubt the best lunch in the VAFA – held at every Rovers home game! Many more dropped in throughout the day and night for what was a huge day at the club.

On the field, for what was TAC Road Safety Round, it was terrible conditions for footy, with blustery conditions making it tough for the players. The Rovers had been hit by injury and holiday travel, with three changes on Thursday night and then another late out.   Hampton won the toss and had the wind in the opening term.  Jim Keys put the first major on the board at the 2 minute mark and when Christian Carnovale kicked the second a couple of minutes later, it looked like it was going to be a goal feast, but that didn’t eventuate! The next goal came at the 28 minute mark when Ben Marron took a strong mark and kicked truly.

In between, Ormond were putting up a strong fight. Their defence was holding firm, but they were not able to penetrate the Rovers defence, especially with Max Van Der Stratten and Oscar Roberts pulling down many marks in the difficult conditions.  Ryan Fogarty was enjoying the tough conditions and he just kept boring in for the loose ball.

A 20 point lead at the break having had the benefit of what was at least a 5 goal wind, the second quarter was going to be interesting.  Jim Keys, with locks flowing banged through his second goal in the first minute of the quarter into the breeze.  Ben Kneebush, back in the seniors for his first game in a month was having an effect and his ability to read where the ball was going was a benefit in the tricky conditions. The Rovers backs were holding firm and while not scoring, Hampton were playing a good style of footy albeit unable to put through another goal for the quarter.  On the other hand, Ormond who had minimal forward 50 entries seemed to score each time they went forward.

At the main break, coach Anthony Quon stressed that the players had to remain cool, calm and collected, rely on the game plan and concentrate.  As the game resumed, the Rovers were dominant in their control of the ball.  The teamwork in the windy conditions  improved but for the second week in a row, struggled to kick a goal.  2.10 for the quarter to Ormond’s 1 straight and the game was still wide open.  Ryan Leslie and Lachie Carrigan were on top on their back flanks and kept the ball locked in the forward half.  Benji Audige was winning the taps in the ruck all day and as the game wore on became more prominent around the ground.  Cam Morris was his aggressive best and some of the contested marks he took were a treat.  Again, it was Ben Marron’s strong one on one marking that led to the first Hampton goal for the quarter and the other came from the 60m mongrel pass from the skipper that evaded the pack and went through for the second for the term.

24 points up at the start of the final term and the wind seemed to increased in speed, but it soon became apparent that the wind would not be enough for Ormond.  They had run out of legs and while they kept banging the long bombs forward, they couldn’t upset the Rovers backs who continued the domination of the Ormond forwards.  Hampton had an equal number of scoring shots for the quarter, but the difference was that it took one kick from the centre to land the ball in the goal square while against the wind it took at least 4 kicks.

The Rovers had some great linked play in the quarter – Pross a handball in Cam Morris’ direction, he quickly tapped it to Andrew Woolston who hit Ben Marron lace out close to goal another when Ned Gray passed to Cam Morris who passed to Cogs who then hit Andy Woolston – both failed to goal!  The conditions were extremely difficult. In addition to the behinds kicked, several went out on the full while some fell short of the goals. The last two weeks has seen the Rovers kick 14.41 – both wins – but the accuracy will have to improve as the finals approach.

It was a fantastic fighting last quarter where Prosser, Ned Gray, Carnovale, Liam O’Driscoll and Scott Ebbott around the midfield all fought hard to keep possession of the ball with the Rovers. A good win by the Rovers in trying conditions and wasn’t the song sung with gusto!

Congratulations to Max van der Stratten on winning the Barnes Family Medal for BOG honours and the Rovers for regaining the Buxton Cup.

The Rovers now have a week off due to the draw during this extended Premer C season and the week after, travel to take on Preston Bullants. The next home game is August 6 against Mazenod.

Clearly tough conditions for the women when they only win by 19 points!  A real percentage crusher for the season. Great to see Steph Peacock continue on her goal kicking spree this season taking her total to 37 in the year to date. I understand that she has her sights set on 50 for the year!

Congratulations to Will Crawford for hitting the lead in the Division 1 goal kicking race in what was a big win the Rovers over Old Trinity on their deck. The Rovers sit fourth on the ladder in division 1 with five rounds remaining.