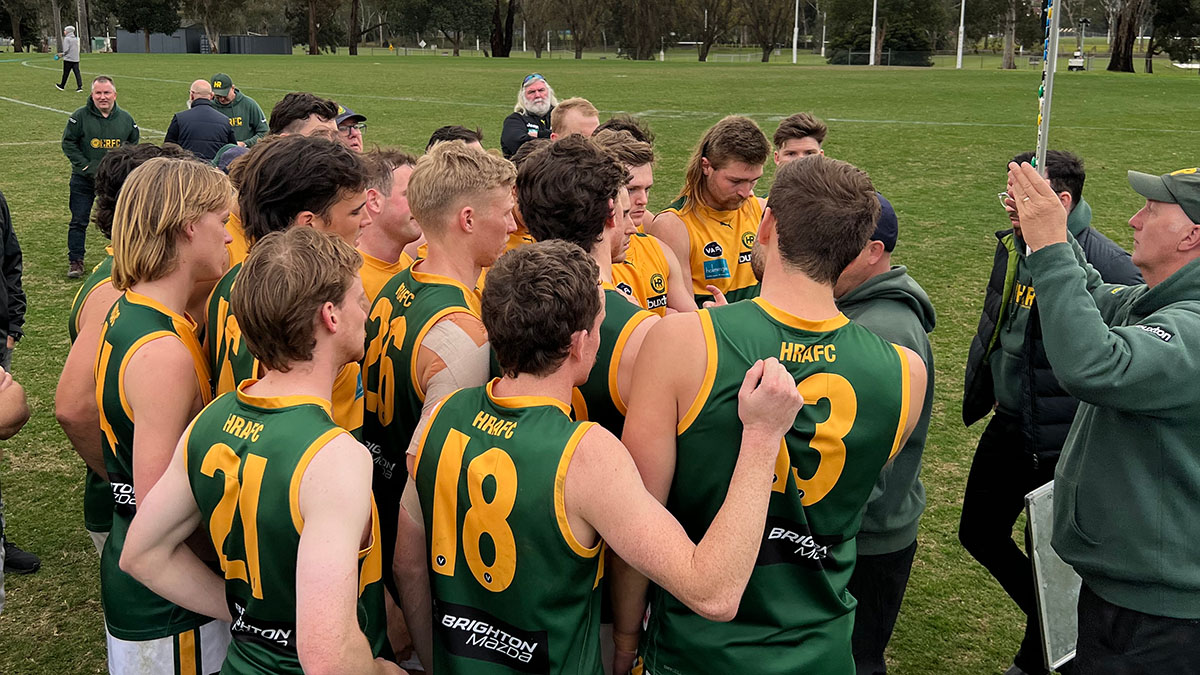 The Hampton Rovers Seniors scrapped out a 15-point victory over Marcellin at Bulleen on Saturday, but it could have been a whole lot more, if not for inaccurate kicking.

It wasn’t pretty against the eighth placed Eagles, the first half especially, with turnovers aplenty and the Rovers kicking eight goals, 22 behinds, with twice as many scoring shots as their opposition. Despite this, the home side got within three points with a couple of minutes remaining, before the Rovers finished strong to seal the win.

The first half had Marcellin leading by 10 points at quarter time and seven points at the main break in what was a frustrating half of footy for the ladder leaders. Inaccuracy was costing the Rovers, as was an array of errors, and the boys needed to improve after half time to have any chance.

The third term was a much better performance by Hampton as they started to play the footy that has them on top of Premier C. Three goals for the quarter while restricting Marcellin to just the two behinds had the Rovers up by 16 points at the final change and there was suddenly an air of confidence in the group.

Hampton controlled much of the final quarter. The home side kicked the first of the term but the Rovers were still hanging onto a 15-point lead mid-way through. Time ticked on and the Rovers looked to be just about home.

But a late fight from Marcellin with two majors brought them to within three points of Hampton at the 29-minute mark of the final term. Enter the captain. From the middle, Benji won the tap, James Prosser collected the loose ball and handballed to Ned Gray who fired the quick handball to a running Christian Carnovale who from 50 metres kicked a true captain’s goal. This was followed by Carny out of the middle, to Cam Morris who kicked the ball inside 50, a Prosser handball to James Keys who kicked a great goal from the boundary to secure victory for the Rovers.

James Prosser was best on for the Rovers, while Ben Marron was the only multiple goal kicker for the victors with two. The tight win along with Monash having a big victory over Preston on Saturday sees them sneak ahead of Hampton on the top of the ladder.

Next up, the Rovers return home to Boss James Reserve to host arch-rivals Ormond in the biggest home game of the season, with the boys keen to atone for the defeat under lights last time they met. It’s set to be a big day at the Boss, being Past Players Day, and a big crowd expected. Make sure you book your spot for the home game luncheon before it sells out.

In the early game, an undermanned Rovers team went down to Marcellin by 13 points. The home side finished stronger and frustratingly for Hampton, like the seniors, we had many more scoring shots. Corey Jones booted five goals for the Rovers with Miller Chilcott best on.

All other teams had the week off and all five senior teams will be back in action next week.