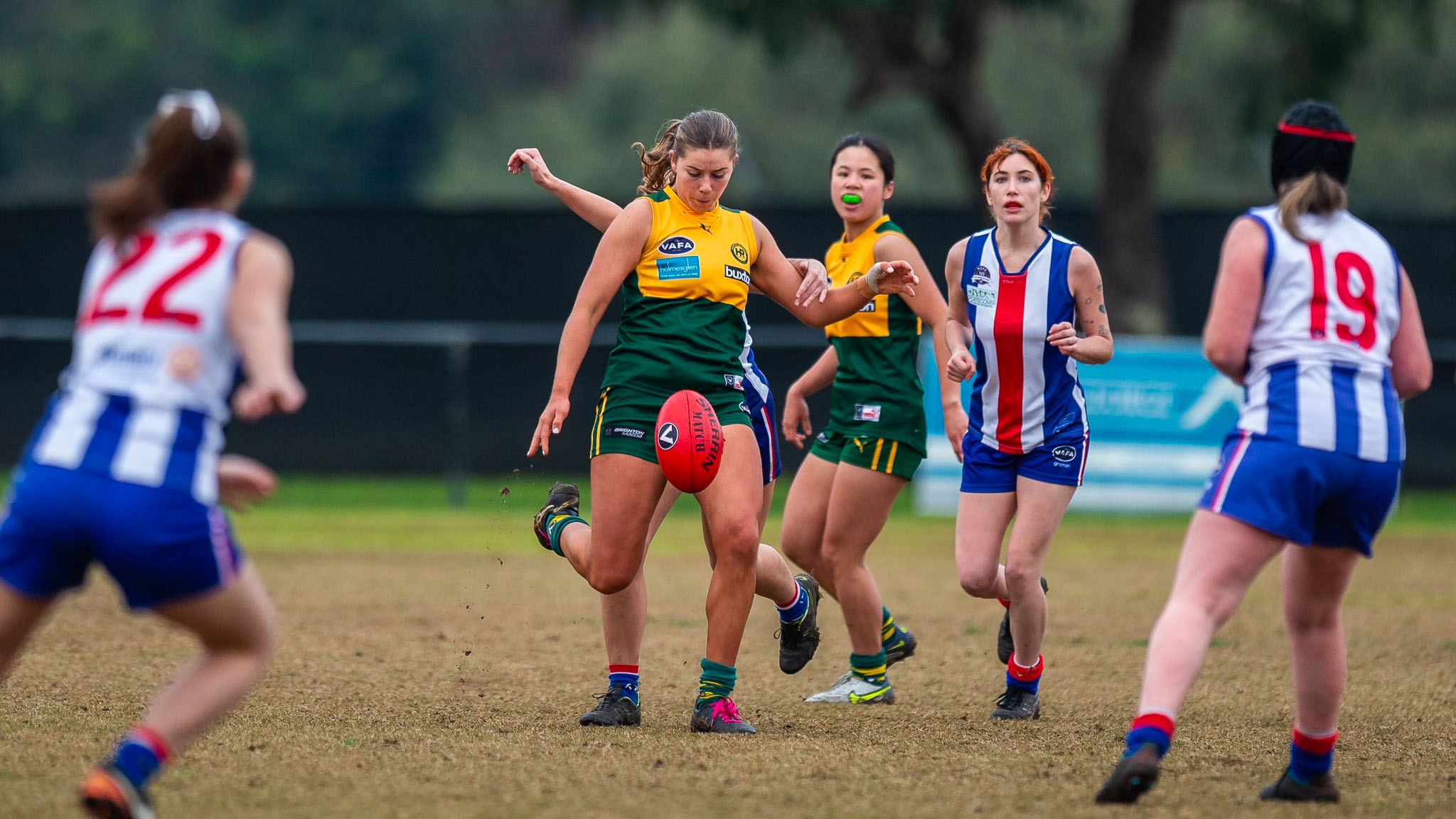 Perfect footy conditions again greeted the Rovers Senior Women’s team as they arrived at Scammell Reserve to face Oakleigh, and again, it was a big challenge ahead, up against a fired up Oakleigh who were playing for a berth in the finals.

It was great to see Gabby (aka Gabriella our awesome team Manager!) pulling on the boots for her first game of the season.

Right from the outset it was clear that Wardy had got the team up and firing for this match as their aggression, teamwork and extra-effort approach were evident from the first bounce. Mandy led the way and her steaming run through and pick up from the backline helped set the tone for the Rovers.

EmJ and Millie were combining well and a run down and tackle by Steph showed what the team was about and soon Oakleigh, even though much bigger, were starting to look over their shoulders. Nina was showing great desire and aggression while playing good hard footy.

Oakleigh’s backline was doing a good job in holding the Rovers out until Maegan took a strong mark and converted her set shot for the first goal.

Our second goal followed not long after when Courtney broke through her opponent’s tackle and goaled on the run.

Oakleigh got a late goal but with a couple of the Rovers shots hitting the post we only had a 12 point lead at the first break, even though it was 8 scoring shots to one!

Bree was in and under and back to her best while Bella was doing a great job and Hayley was showing the way by going in and getting the hard ball.

The Rovers were playing a great brand of footy and the ‘Rover’s footy twins’ Tayla and Steph were simply brilliant, they both scored goals in the second quarter as a result of, not only their skills but hard work and second and third efforts. Millie also slotted a nice goal after a very slick handball from Alana.

Gabby came on and immediately had a impact heading straight into a pack to feed the ball out, she also took a strong pack mark and when she later baulked, snapped and just missed a goal, she nearly bought the house down!

After a great first half of footy from the Rovers, certainly one of the best I’ve seen, however the third belonged to Oakleigh as, to their credit, they fought back strongly. They got a well deserved goal and the Rovers missed a few shots to register 3 points for the quarter, taking our tally to 14 behinds for the game so far. This was not taking away the awesome efforts throughout the quarter by the Rovers women as they were still working very hard however things just weren’t going their way in the third.

The work being done by Lily was awesome and the same with Bella as they both cut off many of Oakleigh’s moves forward. There was still positives to take as Oakleigh actually only outscored us by 5 points for the quarter.

After an inspirational address by Wardy at the three quarter break and with Mandy, Hayley and a number of the women all contributing they were set to go for the last!

However Oakleigh got an early goal and it was game on!  The Rovers were not fazed and they immediately lifted and piled on the pressure to their opponents. Shae who was playing an excellent match, twisted and balked, got the ball to Steph who calmed slotted it through for a major.

Kristy and Mandy continued to read the ball to perfection in the back half and Tash’s game was great to watch with her ruck work, driving kicks and precise long hand-balling. Jaz was always busy and ready to take on her opponents with her driving runs and Jessica continues to improve each game as she just racks up disposals.

A final comment on the 4 quarter brilliant game by Tayla who was clearly best afield and gave us all an awesome display of footy.

View photos from the game >