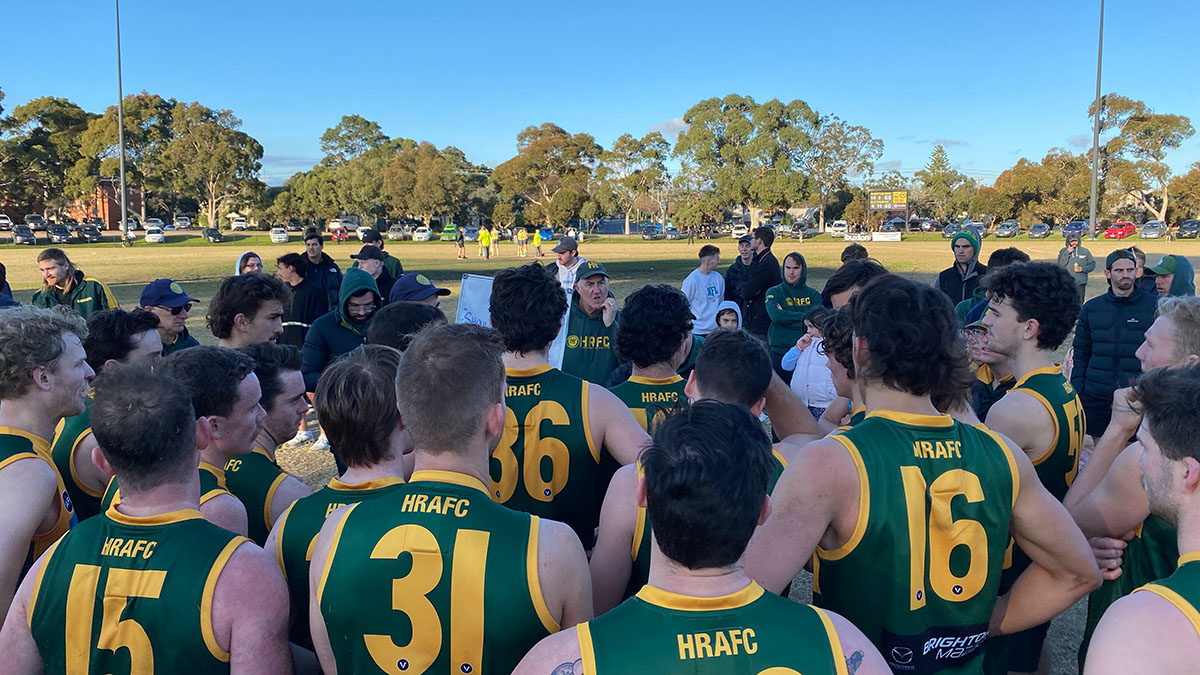 The Hampton Rovers Seniors held on to defeat Old Ivanhoe by 20 points in quality game of Premier C Men’s football at Boss James Reserve on Saturday.

The Rovers went into the game with three forced changes, with injuries and travel were playing havoc with the playing roster, however after a strong performance the round prior and a earlier in the season at Ivanhoe, there was a sense of confidence for the ladder leaders.

The players coming in were polished senior performers, Oscar Donald and Matt Rieniets both back from stints in the Ressies, Harry McIntyre having finished work commitments was straight back in for his first game of 2022, and Andrew Woolston making his senior debut for the club.

Hampton started strongly with a goal to Melnjak  in the first couple of minutes.  Jacob Gray continued his form of last week when he missed his first shot at goal to follow up with his first after some great teamwork by Dillon Melnjak, Jacob Gray and Danny Corp who eventually got the ball back to Jacob who kicked the banana accurately.  Ben Marron then featured with 2 quick goals and the Rovers had a good break on the Ivanhoe boys.  When Jacob Gray kicked his second for the quarter, the home side was 3 goals up and looking good.  Then disaster struck when Jacob went down hard after what appeared to be a fairly innocuous bump and he was in trouble.

The second quarter was a hard-fought affair. With Scotty Ebbott on the ball continuing his good form and Matty Rieniets moving well at half forward, the Rovers were on top but not being rewarded.  It was first gamer Andy Woolston who kicked the first of the quarter, he also rkicked his second later in the term.  Ryan Leslie who was using his pace to advantage goaled and then a bullet like pass from Ben Marron to Harry McIntyre gave Hampton 3 goals on the trot as the lead went out to 29 points.

A free against in the dying seconds allowed Old Ivanhoe to reduce the margin at the main break.  The backs were clearly feeling the loss of Oscar Roberts at CHB and while on top of Ivanhoe, generally the opposition’s main forward and competition leading goal kicker was dangerous. Max Van Der Stratten, Harry Crisp, Rich Atkins and Lachie Carrigan were sharing the responsibilities down back and covering most Ivanhoe forward thrusts.  Danny Corp, carrying on from his polished performance as guest speaker at the pre-game luncheon was effective whether on the ball or up forward and big Liam O’Driscoll, having more time in the ruck this week was playing a strong game.

The second half started as a tense struggle.  In fact, after 32 minutes of footy each side had only kicked a goal apiece.  Hampton had their chances – Christian Carnovale passed to Lachie Carrigan whose long ball forward was directed to Liam O’Driscoll who marked strongly…he missed.  Shortly after Ryan Leslie struggled to pick up the loose ball, finally did so and kicked to Oscar Donald who was hit late and earned the free.  He kicked accurately for Hampton’s only goal.

Four goals up going into the last quarter with a breeze that was favouring the Rovers’ end and the home supporters thought the boys were home until the visitors banged on the first 3 goals of the quarter to reduce the margin to less than a kick with 22 minutes of game time gone.  Of course, it was time for the skipper to get more involved, a quick handball from Ryan Fogarty to Carnovale who snapped accurately.  The boys had steadied and they kept the pressure on. Carnovale kicked his second for the game and from the half back flank, Lachie Carrigan kicked the sealer with a bomb from inside the centre square to give the Rovers their second win over third-placed Old Ivanhoe for the season.  A great fighting win against a strong opposition.

While usually in the middle of a two-week competition-wide bye, the games keep rolling for Premier C due to the extended 22-round season. Next up, the Rovers travel to Bulleen to face Marcellin Old Collegians on Saturday.

In the early game, Old Ivanhoe ran out big winners over the Rovers Reserves, the Senior Women recorded a gutsy win over Oakleigh, while the Under 19s had a disappointing loss to Old Xaverians. The Thirds had a bye.