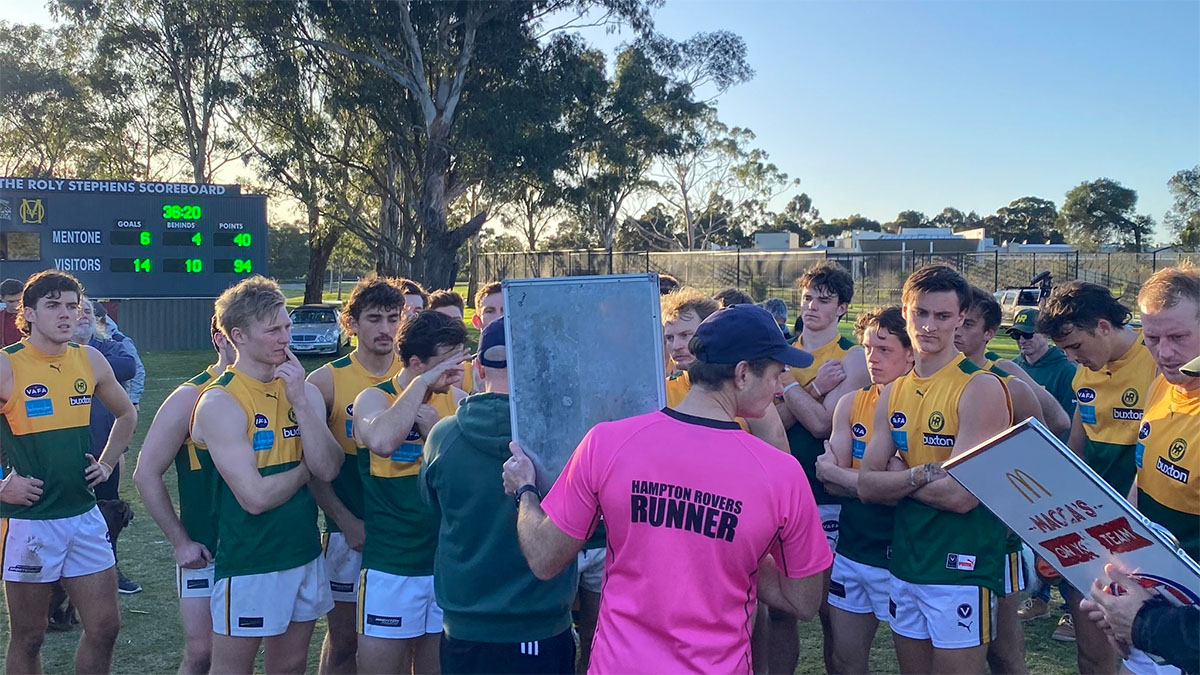 The Rovers Seniors recorded a big 83-point win over Old Mentonians at Keysborough on Saturday to remain top of the table in Premier C.

Three goals in the first 10 minutes of the game and the Rovers were on top.  It was the quick ball movement that was so pleasing to see. The first goal started with Crispy from half back, a quick handball to Oscar Roberts whose mongrel punt forward was sharked by Daniel Corp who quickly slotted the goal.  A couple of minutes later Dillon Melnjak intercepted the Mentonians backman’s kick in and goaled from the set shot. For the third, Ryan Fogarty’s long shot at goal was marked by an ever-alert Max Coughlin who didn’t miss from close range.

Half the quarter was gone before the home side scored a goal after a set shot went astray. Fortunately, Ben Marron shortly after earned the free within range and did not miss. Hampton seemed to have all the play and the OM players were waiting to react to what the Rovers.  The Rovers kicked two more goals for the quarter, Jim Keys marked on the boundary line and slotted a tricky shot and Ryan Leslie’s pass to Jacob Gray was snaffled by him and after his practice shot a few minutes earlier made no mistake.  A 27-point lead at quarter time was a just reward for the boys’ efforts and the back six had a great quarter.

The second quarter opened with Dillon Melnjak having a set shot for goal after a wayward OM kick went out on the full, and his check side punt split the middle. Ben Marron posted his second and when the skipper handballed to Jim Keys who snapped accurately you could see the Mentone boys wilting under the relentless pressure.  Typical of this was a strong and desperate smother from Ryan Fogarty on his opponent, similarly VDS’s big spoil on one of the tall forwards was a great result.

Corpy was enjoying his new role and when he bundled an opponent out of the way and kicked the mongrel punt for goal, the travelling Rovers supporters were up and about.  The backs continued their relentless attack on their opponents and when Ryan Leslie made the long chase from full back, caught his opponent, won the ball and cleared it to the forward line it was clear that OMs had no answers to the Rovers speed, aggression and accurate ball movement.  The lead increased to 52 points during the quarter to put paid to any Mentone chance.

The third quarter was when Old Mentone made their charge.  Three goals by them to the midpoint of the quarter and they were looking good but credit must go to the Rovers backs for restricting any further scoring.   Hampton’s goals came from Coughlin, Corp, Ben Marron and Oscar Roberts from a mark in the square and the bous were looking strong. Sam Clements continued his good form in the ruck, and while up against taller opposition, he was consistently winning the taps or the contacts.

At the final break, the coach urged his charges not to drop the pressure off.  They didn’t and the final quarter was some of the best footy the boys played this year. An 8 goal to 2 final term was a just reward for their dominant display.  Great to see the Rovers forwards hit form and when you see that Jacob Gray kicked 4 from some strong marks, Max Coughlin in the goals with another 4, Dillon Melnjak with 4 and Daniel Corp and Ben Marron both with 3 all had sensational days.

Best on ground honours was something of a dilemma as we had the goal kickers, some great work from our backs, Oscar Roberts in particular, but it as Ryan Leslie who impressed the coaches the most with his relentless attack on the ball and his opponent and the number of contests he won.  The unlucky one was Sam Clements, who again fought tirelessly against the taller Mentone rucks and clearly was the dominant ruckman on the ground all day.

Next up, the Rovers return to Boss James Reserve to host Old Ivanhoe this Saturday.