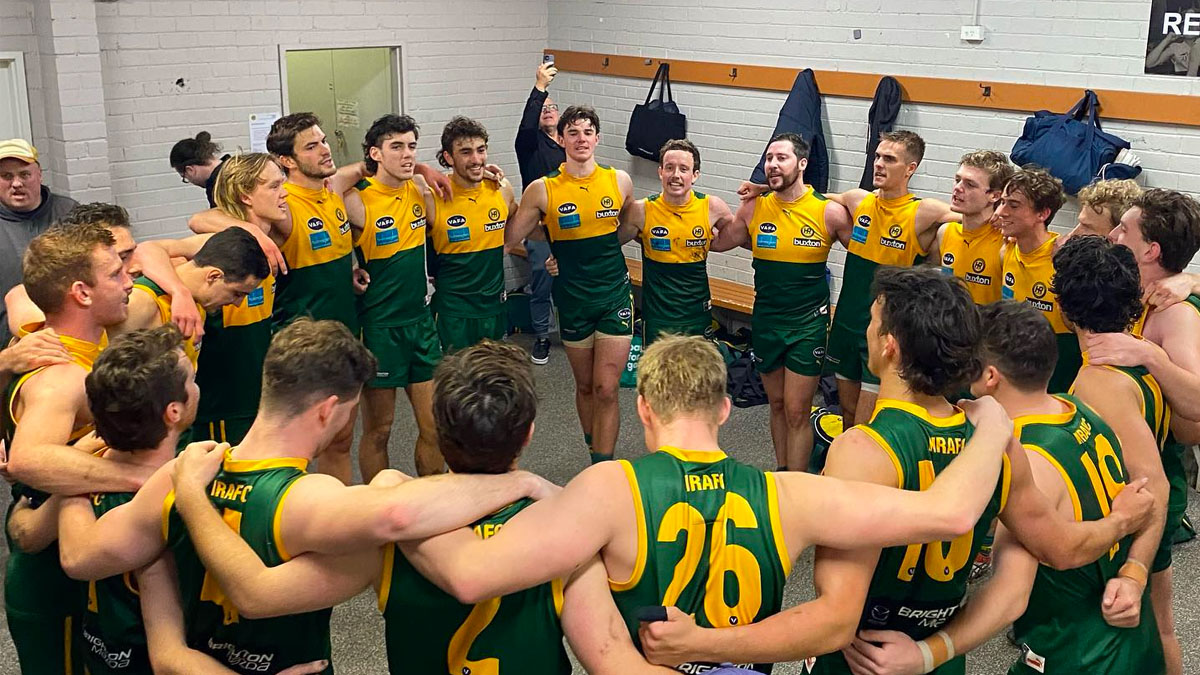 It was a fantastic day for football, with the sun shining, little wind and two teams eager to notch up a win. The Rovers went in without Sam Clements who has been in great form so far this season, while Lachie Carrigan had a last-minute call-up to Richmond’s VFL side.  In all, 7 changes from last week’s tussle with Ormond.

Parkdale were quick out of the blocks and in a matter of minutes, had their first goal on the board.  They were looking dangerous but fortunately their forward thrusts were being repelled by the Rovers’ steady backline.  Daniel Corp and Jacob Gray were looking dangerous early but we were just unable to score.  This seemed to continue for the next 20 minutes where Hampton seemed to have 90% possession of the ball but unable to trouble the scoreboard.  Late in the quarter, there was a chance when Corpy on a long lead was hit accurately by Liam McCartney within scoring distance.  Fortunately, he did score, only a behind but it meant the Rovers had registered their lowest score for a quarter this season.

At the start of the second term, Parkdale attacked ferociously but the Rovers talls in Oscar Roberts and VDS backed up by Harry Crisp and Rick Atkins held them at bay.  Finally, Liam O’Driscoll pulled down a good mark from a sharp pass from Corpy to put the first goal on the board for the home side.  While the Vultures quickly answered, the Rovers were starting to create options and goals quickly followed from Dylan Melnjak, Christian Carnovale and Ben Marron. A late Parkdale goal just before the siren narrowed the Rovers lead to 8 points.

The third quarter was again an arm wrestle.  Ben Marron was more prominent up forward and kicked his second goal after the first proper link up down the far side which resulted in a slick pass that Ben managed to grab.  The boys were fighting it out, a great effort by Ned Gray to have repeated contests to keep the ball in our scoring zone.  Max Coughlin was running the lines and took a number of strong marks for the quarter but each time we scored, the opposition replied. At the final break, the margin was narrowed to 2 points.  A cliff hanger at the Boss!

The last quarter was a last man standing affair.  Just the three goals kicked, very few out of bounds and lots of kick to kick between the Rovers and Parkdale backs.  Finally, it was the veteran Danny Corp who decided to make the difference and when he goaled from 15m out at the 11 minute mark, the Rovers had a 6 point lead, but who could be sure that this would be decisive?

A few minutes later, after another demonstration of how we really wanted to play, fast accurate ball movement, Corpy lurking behind the pack in the forward line snaffled the easy mark and goaled.  Still, a couple of goals ahead but with still time left on the clock it was a desperate struggle by both sides in those dying minutes to score. Yes, Parkdale did reduce the margin when they managed to pop through a set shot from 45m out on the boundary line, but it was the Rovers who ultimately held firm for a fighting 5 point win.

Scotty Ebbott took out the BOG award for a hard fought four quarter effort where he used his pace to advantage.  Interestingly, four of the Rovers backmen featured in the best, justified when you take into account they held the opposition to 52 points for the game.  Max Coughlin played well all day and was back to his strong marking, good kicking best.  The unlucky man was Danny Corp who I thought fought hard to keep us in the game in the first half and then got us over the line with the only two goals we kicked in the final quarter.

Next week, the Rovers take on Old Mentonians at Keysborough Playing Fields on Saturday, and on Sunday, don’t forget Rovers $2K Day at the Boss!

It was another strong win by the Ressies against a team that had been in great form.  Good to see Corey Jones keep on taking those strong marks and kicking goals.  Michael Garbelotto is on a streak of great form and featured prominently on the day but it was Oscar Donald who picked up the BOG award for the day.