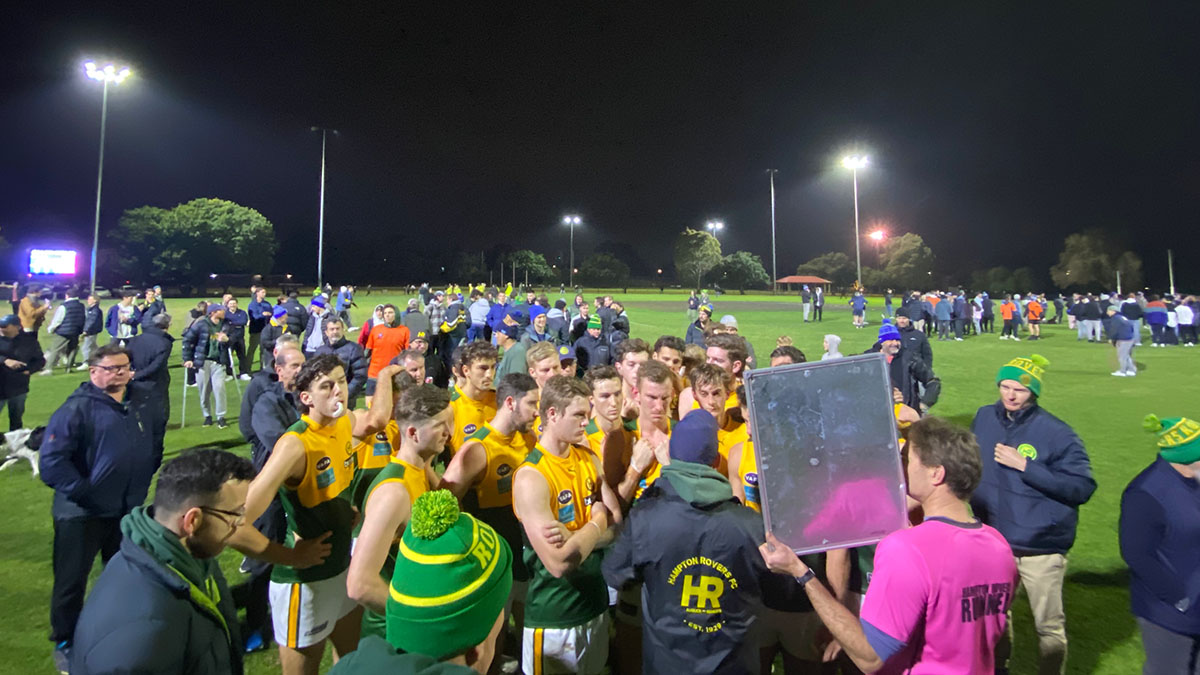 In tough conditions at EE Gunn Reserve on Friday night, Ormond defeated the Rovers Seniors by 10 points to reclaim the Buxton Cup.

Playing under lights for the first time, it was a scrappy affair between the arch rivals, with the conditions turning for the worse after the quarter time break with sweeping rain joining the cold conditions to make it a miserable night at Ormond. And it was the same on the scoreboard, with the Rovers losing their second consecutive game, now with a 7-2 record after 10 rounds of the Premier C season.

To the first bounce and Sam Clements tapped to a running Christian Carnovale who broke the tackle and booted long to the forward line.  The Ormond backs were more desperate for the ball and won it back and drove it into their forward line. That seemed to be repeated many times in the first quarter.  The home side  got their goals on the rebound with fast messy play forward that often, by chance, ended up in the hands of one of their running midfielders.

Max Coughlin was given a chance early by way of a sharp pass from Cam Morris, he missed but fortunately when given a similar opportunity minutes later, this time by Fogarty, he kicked truly to put the Rovers first goal on the board, at the 11 minute mark.  Oscar Roberts was marking well on the last line of defence and both Harry Crisp and Rich Atkins were mopping up the loose balls.

Buckley for Ormond was dangerous and was giving Max Van Der Stratten a run for his money.  At the 29min mark, Ryan Leslie passed to Josh McPherson who kicked accurately to reduce the margin in Ormond’s favour to a goal. Ormond opened up the lead with an easy goal on the quarter time siren.

The second term was an arm wrestle, goal for goal with neither team able to gain the ascendancy.  Clements continued his domination in the ruck and around the ground.  Oscar kept pulling down some good marks in what were becoming increasingly difficult conditions. When Chris Perkins received the free on the 50m line, he showed some nerve to kick truly from the boundary line, just clearing the pack for goal of the night.   Hampton’s team work was improving but the boys were strolling to put it together in the conditions.  Speedy picked up the loose ball and cleverly passed to James Keys who missed his shot at goal, but fortunately, he had a second chance a few minutes later  when he swooped on the loose ball and this time kicked accurately.

The best bit of teamwork for the quarter occurred as Perkins cleared with a long kick out of defence, Speedy picked it up, eluded his opponent and passed the Ned Gray who delivered a bullet pass to Ben Marron on the lead – he missed from 40m.  Again, there was another chance a couple of minutes later when Ned Grey kicked forward where Jacob Gray took a good mark 40m out right on the siren and goaled.  Still, a fairly ordinary quarter from the Rovers, with the boys unable to take advantage of their opponents while seeming to have most of the play.

The first goal of the third quarter was another Gray to Gray, this time Jacob to Ned who popped it through from 30m to reduce the Ormond lead to just a couple of points.  From then on, the Rovers squandered several opportunities.  About five shots at goal went unrewarded and at times it appeared that the deteriorating weather conditions had defeated the team.  Clements and O’Driscoll when in the ruck and were dominant but in the mids struggled and were unable to take advantage of their taps. The Ormond players kept fighting it out and  kicked an important goal on the siren to give them an 8 point lead at the final change.

The final quarter, the rain continued, the wind picked up a little and neither side could score.  In fact, in 30 minutes of play, only one goal was kicked.  Ormond defended grimly while the Rovers had plenty of the play but again couldn’t convert on the scoreboard.

The Rovers now turn their attention to this Saturday, finally back at Boss James Reserve after a month or so away from home, taking on an in-form Parkdale Vultures. BOOK NOW for the Home Game Luncheon!