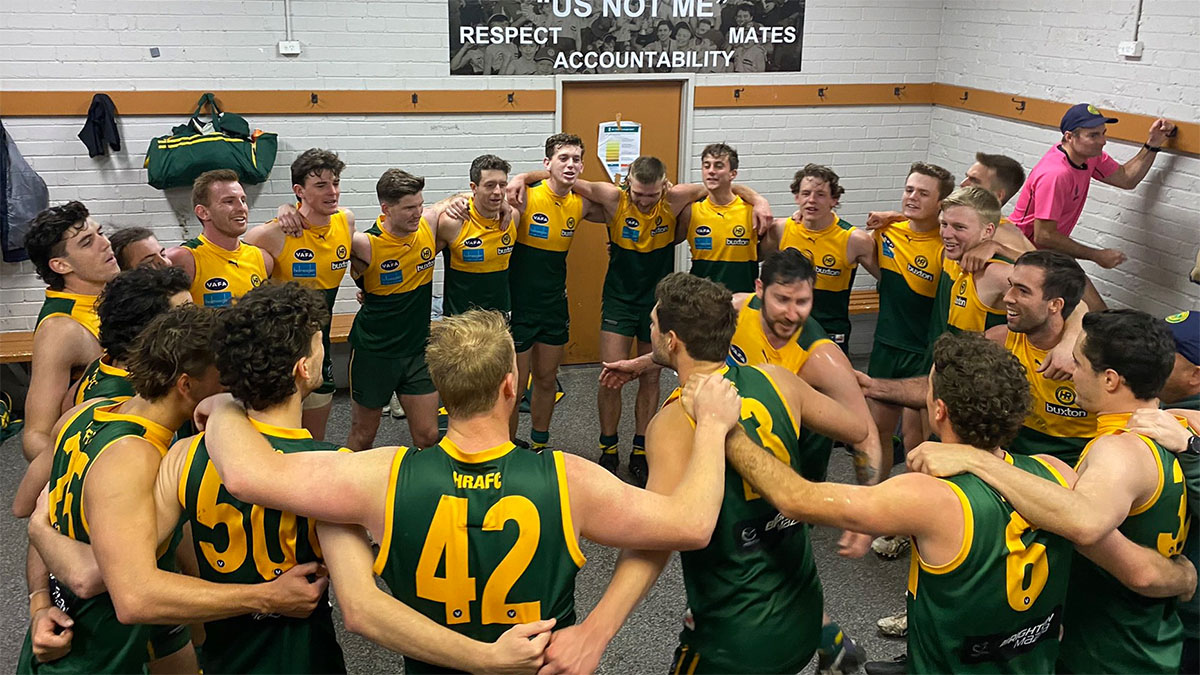 Old Mentonians visited Boss Reserve on Saturday hoping to inflict the Rovers’ first defeat of the season, and at three quarter time, they held a 22 point advantage.

The Rovers did have the advantage of the wind in the final term and what a performance the ladder-leaders put on, with strong leadership from the skipper Christian Carnovale.

Five minutes in and Ben Marron outmarked three defenders 40m out and kicks truly.  A couple of minutes later Matt Rieniets grabs the poor kick from the Mentone defence for the Rovers’ second. The momentum was building and when Zac Mackay picks up the loose ball from a Panthers error, Hampton had three goals on the board in as many minutes, had taken the lead for the first time in the game, and the opposition were wilting.

We then endured a 10 minute period where the Rovers were in front by the barest of margins but the scoring dried up.  In control but not far enough in front.  Then it became the Perko show with a slick pass to Jacob Gray on the lead and followed up quickly with Cam Morris giving the quick handball to Perko who goaled from 50m on the run.

Then Ben Marron put the icing on the cake with a quick snap from the pack from close range.  An impressive seven-goal quarter to keep the Rovers record unblemished in the opening six rounds of the 2022 season.

What can we take out of the day?  A strong wind at the Boss makes scoring difficult. Apart from our two goals against the wind in the first quarter, only one other goal was scored at the northern end! In fact, after quarter time, OMs only scored three goals in 90 minutes of footy.  A great effort from the Rovers backs and this can be seen in the prominence of backmen in the best players.

Oscar Roberts kept pulling down those marks, VDS given the big job on their forward did well to hold him to 4 goals from many opportunities in the first 3 quarters, Liam McCartney never gave up, Ryan Leslie continuing his good form and veterans in Joel Melnjak and Richard Atkins, in his 300th club game, were their usual miserly selves.

The first quarter was a bit of a shock to the big crowd attending the sold-out Ladies Day lunch.  The attack by the Panthers in that first quarter was impressive. They relied on a very short game, with many short passes that were high risk, particularly with a strong wind and wet conditions.  The Rovers did well to score but you could see from the outset that our game was off song.  The opposition seemed to be clearing too easily from the centre and when moving forward, their mids seemed to swarm forward offering many options.  Down by 21 points and the Rovers were struggling.

But the boys battled it out.  The start of the second quarter was a bit of a teaser. Ant Folino burst out of the centre and launched from close to the centre circle and landed the ball in the goal square into the safe hands of Josh Macpherson.  The second goal from the quarter came from some hard work from Carnovale on the boundary who knocked the ball into the path of Lachie Cairns who didn’t miss from 30m.

Five points in it at half time and it was anyone’s game.  It was going to be critical to stop Old Mentonians scoring with the benefit of the strong wind in the third quarter.  The Rovers didn’t worry the scoreboard for the quarter but on the other hand, the visitors were wasteful and the quarter yielded 2.7 for them and the Rovers were in with a chance.

A dominant final term by the home side sealed the sixth win of the season for the Rovers, ahead of a round seven clash against second-placed Mazenod on their home deck, which is set to be the biggest test of the season thus far.

Have you signed up as a 2022 Club Member? Join the Rovers today…