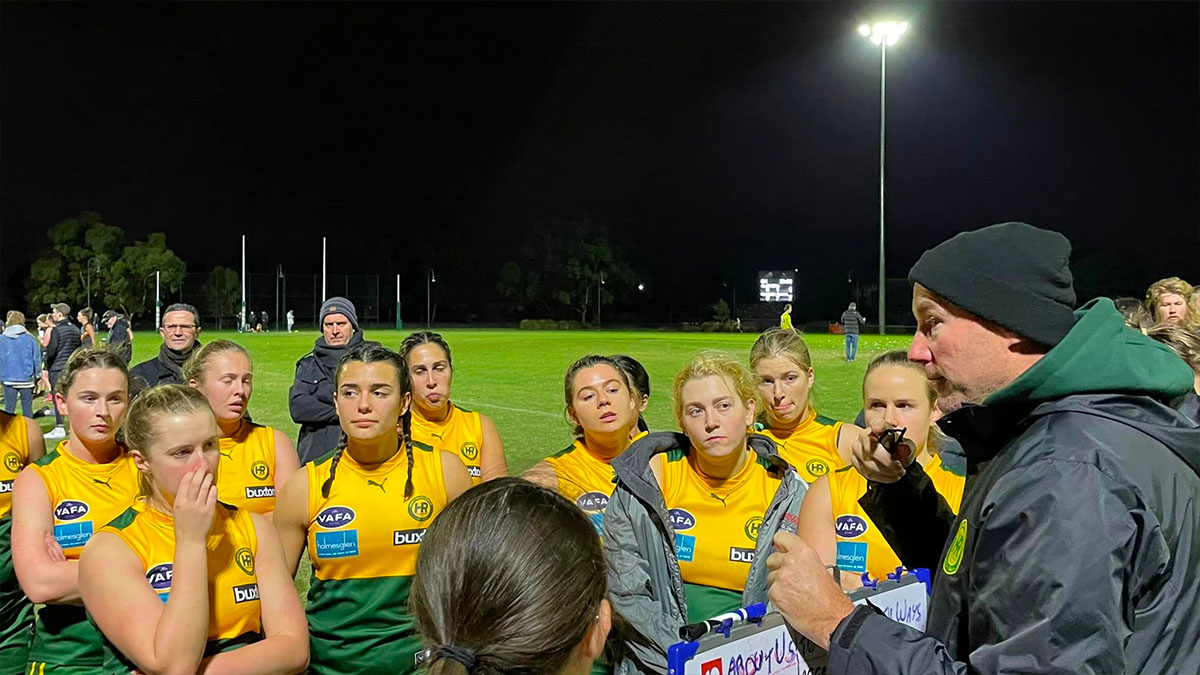 What a battle was brewing for the two top undefeated teams with another twilight clash for the Rovers Women, this time on Glen Eira’s home deck at Packer Park.

It was great to see Co-Captain Mandy back for her first game of the year, returning from injury.

As Wardy had warned pre match, Glen Eira came out very fired up and it was a hard and hectic start, as was expected. Mandy set the tone early with a great tackle, showing the Rovers were not about to be intimidated, in fact we were the aggressors which is exactly what Wardy had asked for!

Casey who was also back in this week, was running and working hard, picking up important possessions and Millie was continuing on from last week’s great game with some physical work in the ruck and around the ground. Maxine was showing great dash as always and Tash was very inspiring charged through heavy traffic and also clunking strong one grab marks.

Glen Eira were combining well and trying various strategies to unsettle the Rovers. Our teamwork lifted and a string of 5 handballs led to a good mark to Greta and a rushed point followed her shot on goal. This was the first score well into the quarter showing what an ‘arm wrestle’ this game was between two very strong sides.

Our marking was becoming a telling factor with Bella’s saving mark in the backline, followed by marks to Alana, Millie and Harmoni who slotted our second behind late into the quarter.

Glen Eira got the first clearance, pushed forward and opened their account with a point. However not long after, with both Jas and MJ combining well with courage and flare, the Rovers worked the ball coast to coast to Harmoni who just missed but another important point was on the board, in a very low scoring tussle!

Our backline had created a strong line of defence and Kristy was marking and tackling very well to repel some threatening attacks by the opposition.

The Rovers ‘one percenters’ such as smothers and shepards were becoming a factor. Steph, Maegan, Jessica were really telling with their forward pressure and tackling.

The game was at a bit of a stalemate and was there to be won by either team.  Alana showed a lot of skill and desire to be able to get two shots at goal which added a couple of more points to the Rover’s tally. Then MJ and Jas combined again for a late behind, taking the score to

7 points to 1 in favour of the Rovers at the half time break.

A goalless first half of footy for both sides may seem like a boring game but both sides were hard at it and the backlines were holding strong.

Wardy stressed to the team to continue our hard approach, aggression and focus on the footy while letting GE use up their strength by getting angry and frustrated.

We responded really well with our quick hands around the packs and running past calling for the ball to keep it moving our way. However Glen Eira had lifted and launched a number of thrusts into their forward line. We stood firm throughout with our really strong set up and work in defence such as a save and driving kick from Poppy, a great tackle by Lily and awesome play making through our inspirational captains Mandy and Hayley.

Unfortunately Steph went down with an ankle injury and would be taking no further part in the game. Millie was starring but was struggling with an injury.

Shae, Courtney and Nina were getting important touches and the whole team responding to the challenge with magnificent determination.

A scoreless quarter for both teams however it was a great battle and anyone’s game going into the final quarter.

At the break the talk amongst the Rovers women again stressed the importance of not talking back against any umpiring decisions or getting angry, instead just getting on with the play and lifting our teamwork and general talk around the ground.

As was expected the pressure from both sides had lifted, as they both sniffed victory! There was some very courageous efforts out there, in particular Casey taking a strong mark, getting crunched then bouncing up again to be involved in the next play. Mandy was attacking the ball with gusto and Tash was brilliant in this quarter as she had been all game.

Unfortunately we had another set-back with Millie off for the rest of the game leaving us one player short on the ground.  The girls dug deep and when Greta evaded a couple of tackles and rolled in a great goal it was hard not to get too excited!

We worked really hard and even got a couple more points before Glen Eira were able to get their own first goal right on the final siren.

Next up, the Rovers Women take on Oakleigh on Saturday morning at Castlefield Reserve. Starting at 9:20am, it’s our 2022 PLAY4BCNA Round as we raise awareness and funds for Breast Cancer Network Australia. Following the game, get along to Boss James Reserve for our Ladies Luncheon – book now to secure your spot!