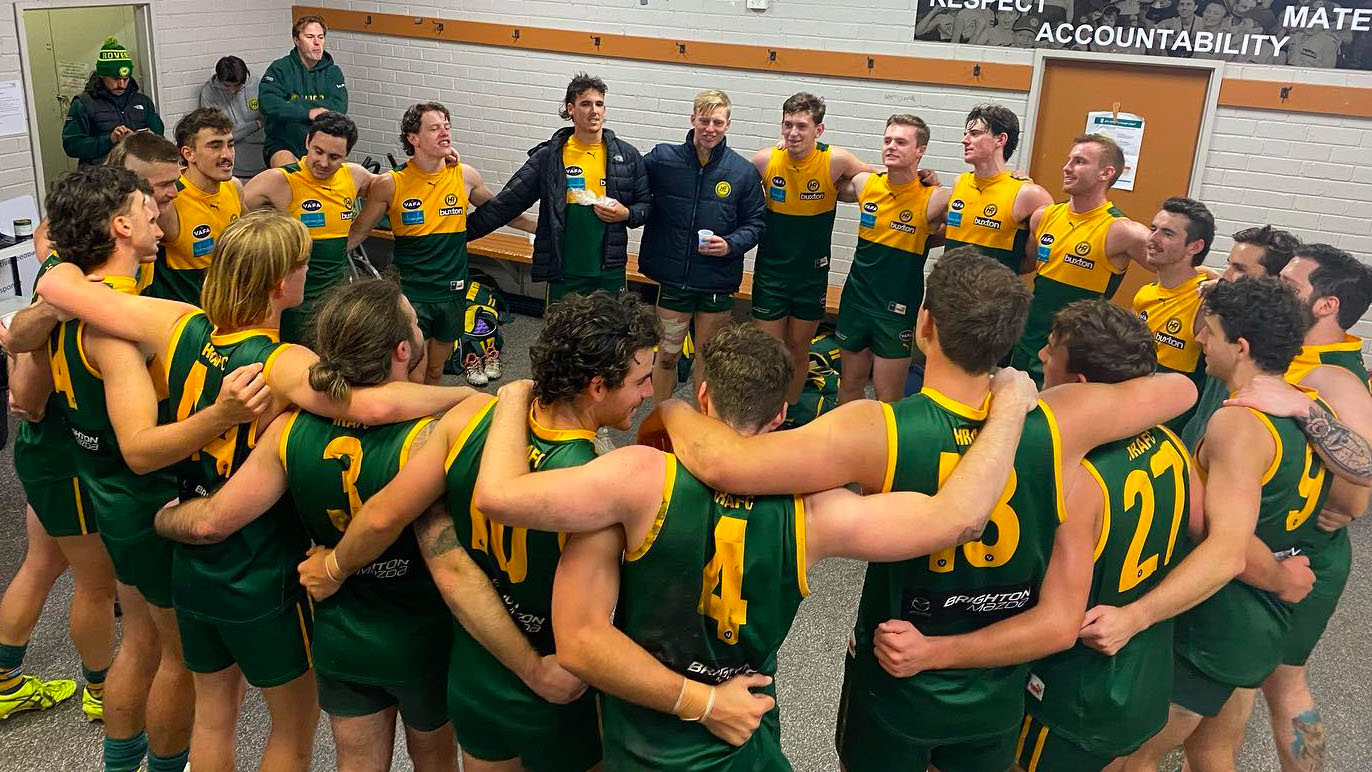 In wintery conditions, the Rovers recorded a big 149 point win over Preston Bullants at Boss James Reserve on Saturday, to maintain their undefeated start to the season.

Such was the Rovers dominance, the opposition’s first goal didn’t come until the start of time-on in the second quarter. In the same period, Hampton had kicked 10 goals and 12 behinds to have a handy lead.

Preston’s second and final goal of the game was exactly two quarters later when their big forward marked and kicked truly from 45m.  Not a bad performance from the Rovers’ back six. Great to see Oscar and VDS improving each week, the veteran Richard Atkins back in the ones and Crispy, Ryan and Liam being so miserly.

The game was played in the Rovers forward half and had the boys kicked straight, this would have been an embarrassment of major proportions.  Hampton kicked thirty behinds, about half of which came from set shots.

From the first minute, the boys were on song.  Liam O’Driscoll kicked the first from the square after 2 minutes of play where we already had 3 easy chances.  It then became the Josh McPherson half. He hit the post three times as well as kicking 6 for the half!

It became monotonous with Benji winning the ruck and either Carnovale or Ant Folino taking the loose ball to our forwards who were all over their opponents.  Perko on the wing was flying and clearly his contest with Lachy Cairns for the greatest distance travelled in a game was being tested.  Both the Gray’s, Jacob and Ned were prominent and both hit the scoreboard.  Cogs, whether on the wing or half forward seemed to be loose all over the ground and the Preston boys had no answer for his run and spring.

After the break, the Rovers didn’t let up but on the scoreboard we kicked 8.18 for the half.  Unbelievable.  The game was a training drill with our boys running the ball up, down and across the ground at will.

The Rovers held a 117-point lead at the final change and have finished games strong in the opening rounds of the 2022 season.  The boys kept running, and the goals (and behinds) continued to flow to the stage where the players seemed to be lining up for their turn for a shot at goal.  5.8 in the last quarter was probably our most accurate quarter for the day! Great to see Speedy regain the form of round 6, 2018 prior to his departure overseas, finishing with nine goals, and with a couple of late changes to make it 10.

A fantastic all round team effort against opposition who are clearly struggling in Premier C. Great to see every one of them in the social rooms after the game for a drink – that’s what Amateur footy is all about.

It’s two consecutive home games for the Rovers and this week, we host Old Mentonians at Boss James Reserve for what will be a big day at the club. It’s our annual Ladies Day Luncheon where we celebrate all the wonderful Rovers women and raise funds for Breast Cancer Network Australia as part of VAFA’s PLAY4BCNA Round. We look forward to seeing all parents, family and friends for what is one of the most enjoyable lunch days of the year.