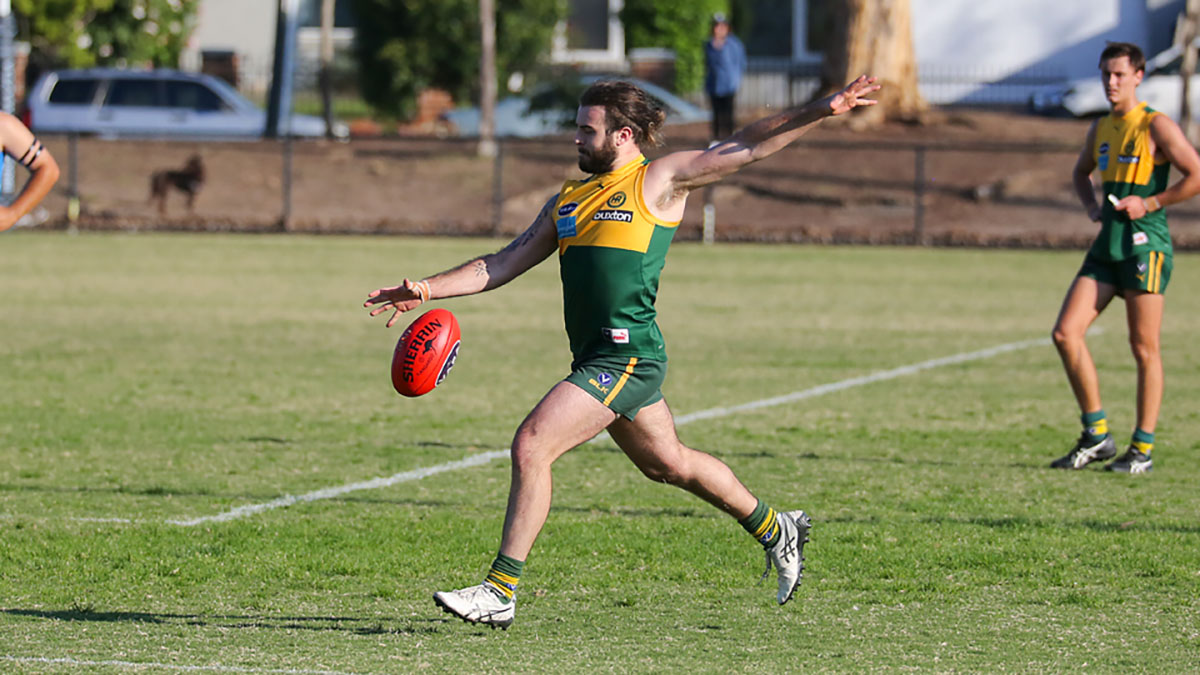 Hampton Rovers made an early statement in Premier C on Saturday, accounting for Monash Blues by 63 points away from home, to remain the only undefeated team.

The Rovers started with the advantage of the wind at Monash University but struggled early, with Monash having a lot of the play. As a result, the Rovers backs were under pressure but the plans laid down back worked and time and time and again, Max VDS would come through with the big punch and the other Rovers collected the crumbs.

Oscar Roberts, Traegs and Crispy just kept running and throwing their bodies in with abandon.  In the forward half, Daniel Corp was again prominent, being on the receiving end of some great passages of play from his teammates as well as getting an obvious free from a poor spoiling attempt in a marking contest.

The highlight of the quarter was the backs clearing the ball to the centre, Carny locked onto the loose ball, passed to Lachie Cairns who then hit first gamer Jimmy Keys lace out.  He made no mistake from 40m.

The second quarter started with a flurry of activity by Monash, but with no effect on the scoreboard. Then, with 5 minutes gone, the Rovers upped the pressure and bang off we went, running rings around the Monash team and had nine scoring shots before they kicked one in time on.

Not to be outdone, in the last minute, Fogs launched a long bomb from inside the centre square which cleared the pack and bounced through for one of the longest goal of the year. The whole team was playing well and the Rovers were on top all over the ground.

Six goals up at the start of the third quarter and the Rovers looked just about home.  When Monash kicked the first of the quarter and you could see their boys lift, it was worrying, yet within a couple of minutes we’d responded with goals to the skipper and DC.

Goals followed to DC again from a mark at 40m, then a Speedy pass to Ben Marron in the square for an easy mark.  Traegs was sprinting to the loose ball as was a Monash opponent from the opposite direction. He took the ball, braced for the hit, bounced off the opposition player and delivered cooly to Ant Folino in the corridor which was great to watch.  The quarter ended with a coast to coast goal to us, through at least five accurate passes culminating in Liam O’Driscoll taking a strong mark straight in front.  A six goal to three quarter and the Rovers had gone further ahead.

As was the case in each quarter, Monash started the last term strongly and after eight minutes had three goals on the board.  Then they just stopped and the Rovers kicked another 4 goals with relative ease and even a little help from the umpire with a couple of 50m penalties. Corpy just kept bobbing up getting shots at goal and by the end of the day, had kicked another 6. The quarter ended on a high with 2 quick goals in the dying minutes, the first from a great mark by big man Liam O’Driscoll in the square out muscling two opponents and the last to who else but the skipper who gobbled the pass from Speedy to mark in front and make no mistake.

There wasn’t a weak link in the team, Ant Folino, Lachie Cairns and Ryan Fogarty had great games in the midfield, Ryan Leslie whether down back or in the midfield just kept getting the ball, there was a bit of magic from Clemo in the second when he baulked an opponent on the boundary at the 50m line, put on the pace and ran away from the pursuers to slot a very cheeky goal.

A great win by the Rovers to remain the only unbeaten team after four rounds, with a home game against Preston Bullants this week.