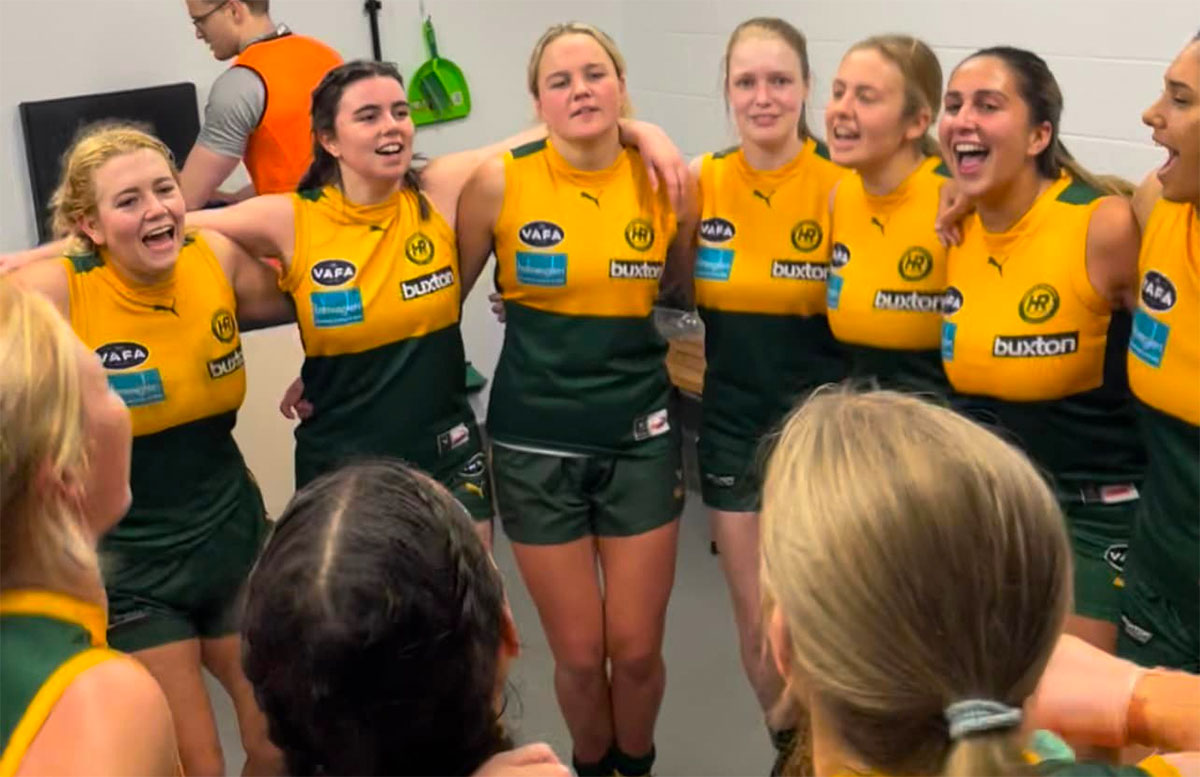 The Rovers women got on the bus for the trip to Bundoora with some surely thinking “we don’t go this far on holidays!”  We had four big ‘outs’ this week, we were going to have to be switched on to take on the strong Uni team. Luckily we did have Maxine and Cath coming into the side.

In his pre-game address, Wardy made it clear what attitude would be needed and that there would be no ‘taking it easy’ after last week’s huge win.

Right from the outset it was apparent that Latrobe Uni wasn’t going to be a pushover and we wouldn’t have it all our own way. Uni got the first centre clearance

and the play remained in their forward 50 for some time, as our back half were being made to work overtime!  After a few stoppages we were able to regroup and start to get the ball forward more often with our aggressive and attacking style of play. Catho set up a good Rover’s play with a slick handball and a follow up block.

Jas was imposing herself onto the match with some good runs and strong work around the ground. Jessica with her speed and agility was looking very dangerous, while Tash was marking strongly and busting packs (just like her less famous brother in the Senior Mens Rover’s team).

We were being made to work very hard by a strong marking and skillful Uni team, however we were able to hold them out on our backline with Millie, Poppy, Maxine and Kristy combining well.

MJ was playing brilliantly, marking everything that came her way and Hayley who was also dominating, slotted the first goal of the game right on the siren. It had been a very hard-fought first quarter!

In the second quarter the Rovers responded to the quarter time rev up by Wardy and Corey and our women started to take control of the match.

This is taking nothing away from a tough and committed opposition. Our talking and tackling had both lifted and there was some really good work in defence such as a strong saving mark by Courtney and the backline skill and dash shown by Harmoni and Shae.

Millie was having an awesome game and doing a great job whether it be in the ruck, taking strong marks or working hard all around the ground. Maegan also was popping up everywhere and she was able to get the ball down to the brilliant Steph who finished off with a good goal. Bella took a good mark which also ended up created another opportunist goal to Steph. Not long after Jas streamed forward and passed to Steph who notched up her third for the quarter!

It had been a strong response by the Rovers Women in the second quarter but Uni were digging deep and fighting on with a great attitude. Wardy had asked the team to be very respectful of this quality opposition and to keep up the strong focus on our teamwork and our attack on the footy.  Maxine had set a perfect example of this with a brave mark she took standing under the ball with the pack bearing down on her! The third quarter was a bit like a game of ping-ping with the ball going back and forward. In was great to see all the Rovers contributing as the tempo and intensity had lifted from both teams. Lily had got busy picking up possessions and Nina also was having a strong quarter. Finally we were able to get the ball forward and get a point on the board, this seemed open things up and not long after Jas was able to score a well deserved goal, as she had been sensational for the whole match.

Steph showed some of her exciting skills yet again with another classy goal.

The Rovers seemed very keen to keep their opposition scoreless for the second week in a row, as they were showing great determination in every contest.

Katelyn was tower of strength on the backline throughout the match and has slotted in very well to the Rovers team. The Rovers weren’t done yet and the ‘Birthday Girl’ Jessica was weaving her magic on the forward line and got the ball over to Steph who somehow conjured up another goal from an impossible position!

Although not reflected on the scoreboard the match had been a really good contest.