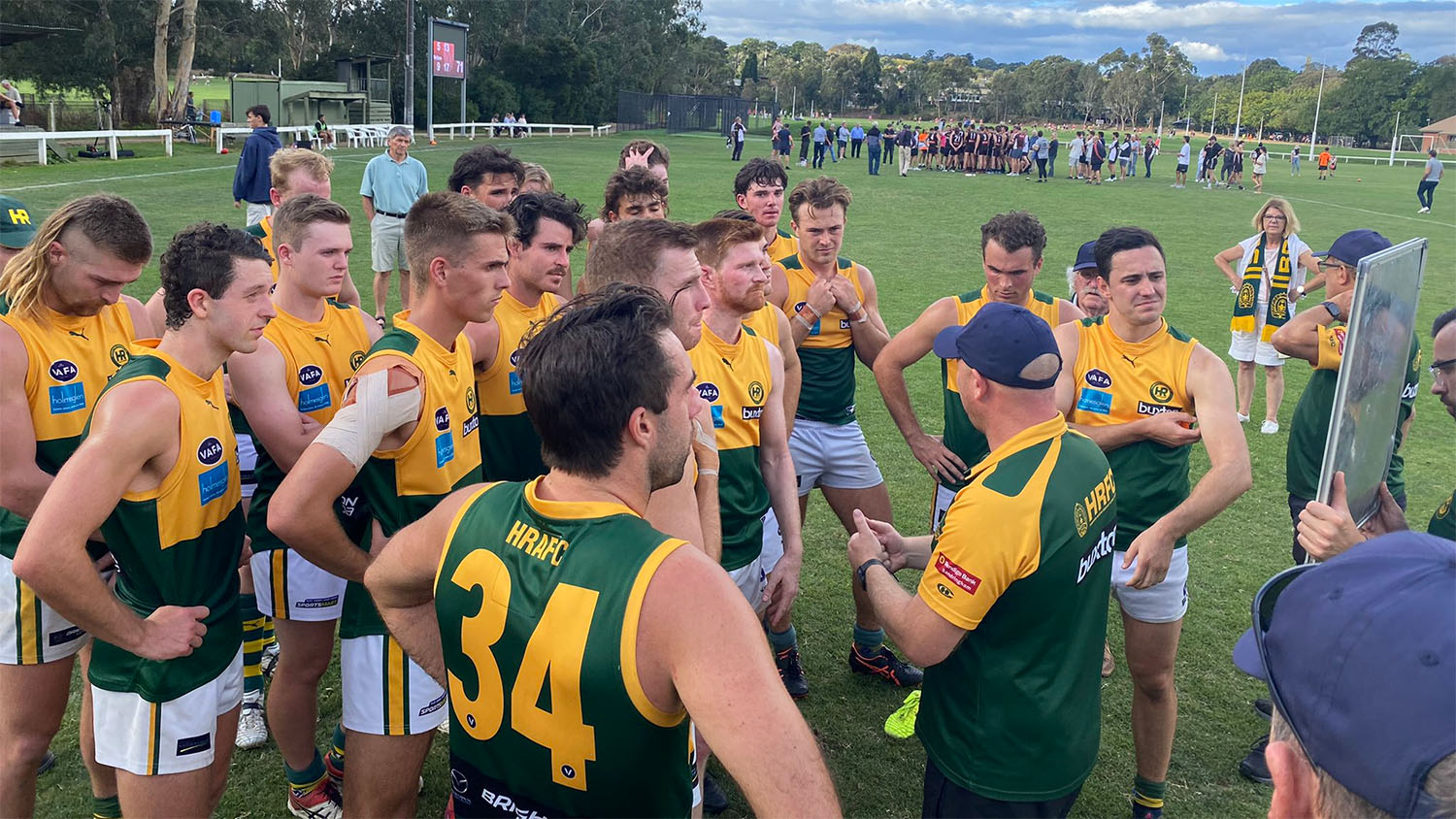 The Hampton Rovers senior men’s side travelled to Chelsworth Park on Saturday and recorded a big victory over Old Ivanhoe – the first Rovers win at the ground in many years.

It was evident that there had been hard work over the preseason and a group of players who had a common goal and really wanted to win. Post game you could feel the quiet confidence emanating from the playing group . Yes, five minutes into the last quarter, against the wind, Old Ivanhoe had made a belated charge with three quick goals to bring them to within a couple of goals, but you could still see the calmness and control of the young Rovers, and there was still 20 minutes of the quarter to go – with the wind.

The inevitable happened, the Rovers prodded into action and bombarded the scoreboard, 7.6 in the final quarter to run out comfortable winners.  You can see the spread of goal kickers, no reliance on one or two, all the forwards and mids contributed to the onslaught where we almost doubled the classy opposition’s score.

While it was great to see the youngsters simply outrun the tiring ‘Hoers boys, a highlight was to see Danny Corp, not playing the one out role that he has been forced to play over the last few seasons, but being able to get some help from Cam Morris, Hugo Lay, Ben Marron, Liam O’Driscoll and many more and take a few marks, assist in a couple of valuable goals and kick two himself. Even Speedy was enjoying the quick ball movement as he helped himself to three goals on the day.

As the President said before the game, “we haven’t won out at this ground for years, in fact I don’t think the seniors ever have!” and after the game was exuberant in his praise of the boys for breaking for the second week in a row one another of our long opposition losing droughts.

It was a battle from the start and while Old Ivanhoe had the wind in the first quarter, the Rovers actually led at the break and with the wind in the second had 15 scoring shots to their two, to only open the margin by 28 points.  Straight kicking and it would have been game over.  The midfield is combining well, Clemo and Liam sharing ruck duties and then Carnovale, Fogs, Ant and Perko just keep racking up those clearances. If the opposition tags one, another seems to bob up. Down back the team was looking good, with Liam McCartney and Max Van Der Stratten gaining in confidence with every game, Traegs, Bush and Joel Melnjak mopping up those loose balls and Crispy, well just doing what he does best – intercepting again and again.

It was great to see some of the young blokes featuring in the first half.  Ned Gray, only 17, and a player to watch for the future. His effortless switch to senior footy has to be seen to be believed.  Zac Mackay, another who made his debut on Saturday, looked at ease all over the ground.  Ben Marron playing game two in the seniors and clearly in need of the run looks very comfortable up forward and with a bit more training and a few more games he’ll be a dominant force up forward.

Great to see Dillon Melnjak and Lachie Cairns running into form and while D was carrying an injury his touch on the forward line and in the middle was sensational.  Lachie, back after a week out, used his pace and precision effectively and kept cutting swathes through the ‘Hoers backs.

The coaches challenge at half time was to outscore the opposition against the wind in the third.  Sadly, they failed, but when you keep the opposition to 1.6 and score 1.5 ourselves, the quarter really was a win.  The Rovers backs held firm and the opposition just couldn’t get enough of the ball to put a decent score on the board.  28 points up at the final break and kicking with a substantial breeze in the last may have had some of the boys feeling relaxed, but in those first few minutes, the home side had the Rovers looking decidedly wobbly.  It took five minutes to steady and it was well and truly game over.

One of the highlights of the game came in the last quarter when Ned Gray, collected the loose ball in heavy traffic, had 3 bounces, a couple of baulks and then delivered lace out to Danny Corp for an easy goal.  The travelling Rovers supporters were up and about.

Following the Easter long weekend, the Rovers return home to host UHS-VU in the traditional ANZAC Day game. A game and occasion not to be missed – book now for the home game luncheon.