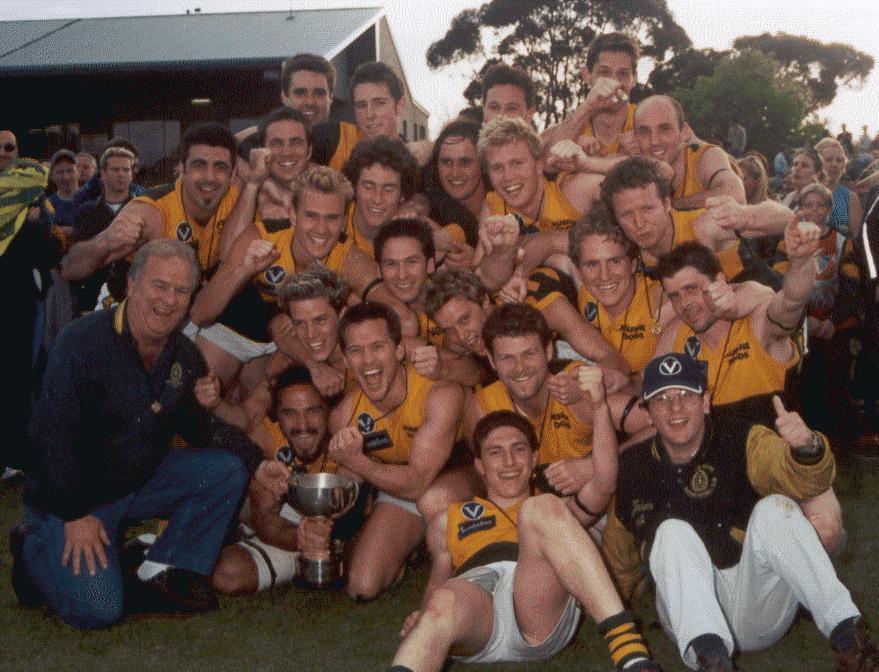 NOTE: This event has been postponed again due to Melbourne’s lockdown. The club hopes to reschedule it once lockdown is lifted.

After being postponed due to Covid, the Hampton Rovers will now celebrate the 2001 and 1995 Senior Premiership’s at our final home game against on August 28, as well as the 1951 and 1971 U19 flags also.

After being postponed last year and twice this year due to Covid, the 1995 flag celebrations coincide with the 2001 event, which was postponed from July 24. The club was also due to celebrate our famous 1951 A Grade Premiership and 1971 Under 19 Premiership on August 7, but with no crowds permitted, these this event has also been postponed and will now also take place at our final home game.

The club has lost four game luncheon’s this year due to lockdowns and restrictions, including our biggest of the year against Ormond. The final game of the season will be against UHS-VU.

The Luncheon will commence at 12 midday and while the seniors game will kick-off at 2pm, the bar will remain open throughout the match as one of our two designated ‘long-lunches’ this year at Boss James Reserve.

The cost of the lunch is just $30 per head (or included in your club membership*) for what is undoubtably the best in the Ammo’s – enjoy a carvery roast lunch with two meats, various sides including veggies, salads & roast potato’s, followed by cheese & biscuits.

*You can show your support for the Rovers by purchasing a 2021 Club Membership, which will cover the price of your lunch. Great to see a few premiership players already sign up. From just $70 – find out more and purchase online here.

To confirm your attendance at the luncheon on Saturday August 28, simply fill out the booking form here or get in touch with Gary Nash on 0407 313 054. You can either pre-pay on the Rovers Shop or upon arrival on the day. Please help spread the word by getting in touch with former teammates and officials.

We’ll have multiple guest speakers to reflect on the drought-breaking 1995 D1 Premiership and the 2001 C Grade Premiership, catch up with those involved, and have the Grand Final replays on TV. Save the date and book ASAP as this luncheon is certain to sell out.