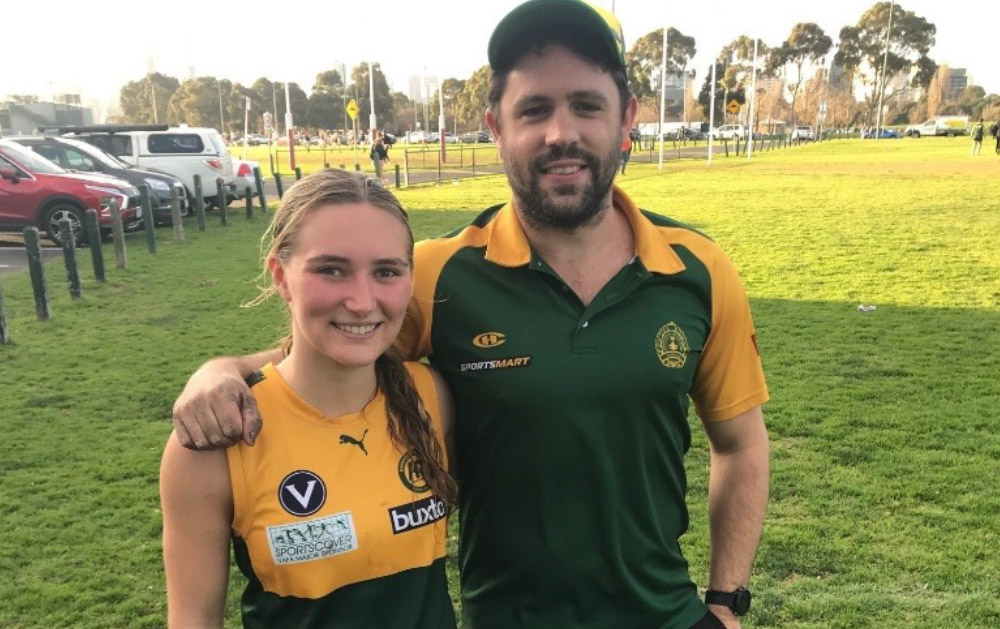 The Hampton Rovers Football Club celebrated a significant milestone on Saturday at the Senior Women’s match at Albert Park.

The little girl pictured below played her first game of VAFA Women’s Football on the weekend. Why is this significant? Well Miss Tayla Jones is the first girl that has progressed from Hampton Rovers Auskick all the way through to senior women’s football. Tay has been a favourite of mine since she was in Auskick back in 2011.

When I presented this young girl with her Auskick certificate, I never envisaged she would one day be the game changer within our Club. This Year 11 student from Brighton Secondary College is super busy with her studies, including Outdoor Education, PE, Psychology, Health and Human Development, English and Mathematics.

Tayla and I sat down and had a chat about her footy career to date.

Caggs: Tay, what is your first memory of football?
Tayla: Playing Auskick at Castlefield with my mates from Hampton Primary School, and everyone giving me a hard time for wearing a Brisbane Lions jumper. I quickly changed it to a Carlton jumper, but looking back on it now maybe I should have stuck with Brisbane Lions.

Caggs: The boys you went to Hampton Primary with have always supported you and you remain great friends today. Has there been anyone else who has helped with your footy?
Tayla: Yes, Luke Nixon-Smith has played a huge role in my development, particularly during COVID lockdown. We kicked the footy every Saturday. He really helped me with my fundamental skills, particularly kicking.

Caggs: What is it about footy that you love?
Tayla: I love the intensity of the game, training with the team and working as a whole. It has been a great way to make friendships that will last forever, friends who have got your back.

Caggs: You have always been sporty. What other sports did you do?
Tayla: I played quite a bit of touch rugby, netball, basketball and cricket at school.

Caggs: Why footy over those sports?
Tayla: I really like the culture of footy and working with a large group of players who all bring different personalities, skills and abilities to the team. I like running in wide open spaces instead of being confined in small court areas. And I really enjoy the competitiveness of the game. Being somewhat vertically challenged, it’s a game where I can still make a contribution, where as I found in other sports being short made it difficult.

Caggs: AFLW is in its fourth year. What do you remember about its first year and did you dream about being a part of it one day?
Tayla: I was excited when it had been made official as a women’s competition. I remember watching the games on the TV. I just really love playing footy, so if an opportunity arises to play at a higher level one day, then that would be great. But I am also really happy to know I can continue my footy playing with Hampton Rovers Senior Women’s.

Caggs: How was your Dragon year in 2021?
Tayla: I had a really good year at the Sandringham Dragons this year. We had knowledgeable coaches, which really helped me with my skills and developed my confidence. It also led to being selected to the U17 Vic Metro team, which was a much faster competition.

Caggs: What is the best part about belonging to a community club like Hampton Rovers/East Sandy?
Tayla: The best part about being part of a community club is the support from the entire club – from the players, parents and coaches. The culture at Rovers is unreal and everyone wants everyone to have fun. I’ve also been lucky enough to Assistant Coach the Under 16 Girls, which are an awesome group. The girls are are always asking how my footy is going. We have formed a great connection and they’ve become a big part of my footy journey.

Caggs: Being the first and only play so far to go from Auskick to the VAFA Women’s you should feel very proud… I hope you do?
Tayla: Yes. It’s pretty crazy that I was the only girl in Auskick back then and now I play in the seniors women’s side. It’s also great to see the number of girls teams that are coming through the Club. Rovers have done a great job in developing the girls program over the years. I cannot wait to keep playing with the Rovers and recruit more girls so they can experience what I’ve been lucky enough to experience.

Caggs: Your team in U16 and U18 at Zebs has been awesome. What role have you played? (We have had several girls registered to Rovers that have been shared between the clubs in U12, 14, 16, 18)
Tayla: This year I was lucky to be selected as co-captain, which allows me to assist in lifting the energy levels amongst the girls. I do like to rev them up with a few jokes. We have a great bunch of girls who are all keen to keep improving their skills, which makes it a fun and successful team. Over the years our Coaches Sean Lynch, Greg Hipwell and Rob Schwarz have played a huge role in my development. I would also like to take the time to thank Jo and Gareth Adams who coached me in my earlier years at Rovers.

Caggs: What’s the best advice from a coach or friend?
Tayla: The best advice has been, “back yourself and stay composed”. It is easy to get caught up in a game and rush the play, but often there is an extra second or so to compose yourself and hit the target.

Caggs: How did you enjoy the senior women’s game last week?
Tayla: I had an absolute ripper of a time. They are such an awesome and talented bunch of women and they have been inclusive since the first training session. We gel really well together, and you know someone has always got your back.

Caggs: Where do you see the future for your footy?
Tayla: I can always see myself playing footy. I would love to continue playing with the Hampton Rovers Women’s Seniors. I will hopefully have an opportunity to continue with Sandringham Dragons in 2022, so it will be interesting to see where things go from there. There is some amazing talent coming through the girls’ programs, which is exciting for footy.

Caggs: It has been a great ride watching you grow up at the club and witness your love and passion for the game and development Tay. I look forward to watching your future endeavors hopefully over the next decade.

Tayla has recently become a development coach with Club Captain, Christian Carnovale, at Tiger Sports. If any Rovers players would like some extra training during the next two weeks, contact Christian to book at appointment via the Tiger Sports Facebook page.