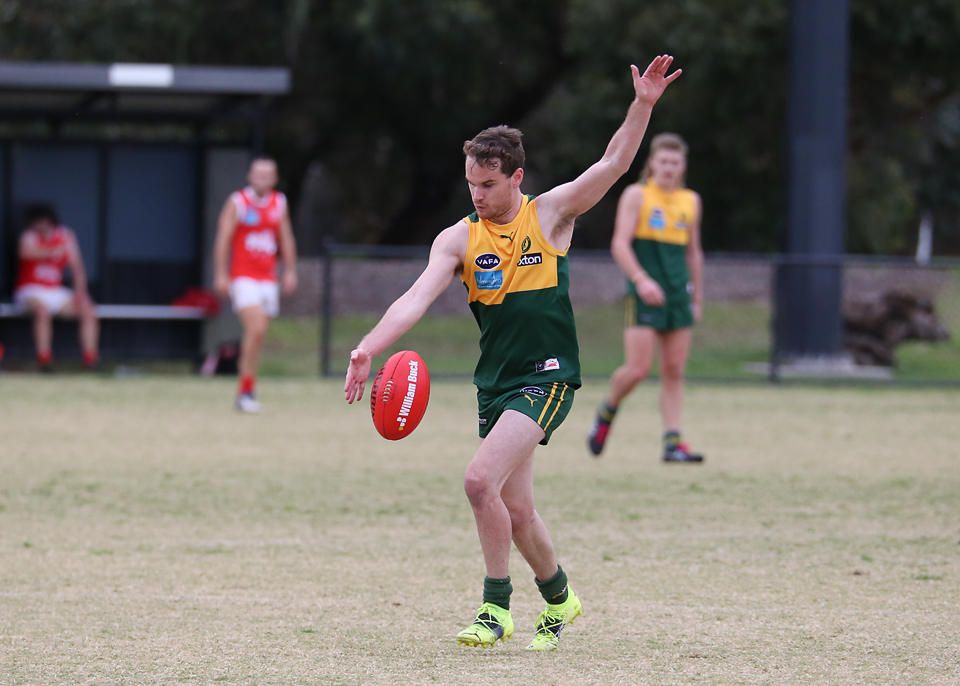 Hampton Rovers recorded a solid 78-point win over Preston Bullants at Boss James Reserve on Saturday in PLAY4BCNA round.

There was a late change for the Rovers, with Josh McPherson ruled out as he battles to return from an injury sustained in the opening round, replaced by midfield dynamo Scotty Ebbott, in for his first senior game of the season.

Going into the round 5 encounter, Preston sat second-bottom without a victory since their promotion to Premer C, with the Rovers third, pointing towards another strong performance. When we popped through the first couple of goals in the early part of the first quarter, it looked like that would indeed be the case.  However, to the Bullants’ credit, they banged through two of their own in quick succession, to the shock of the big Rovers crowd.

Hampton steadied and when Carnovale did the baulk, blind turn and hit Nathan Smith lace out, the crowd was on its feet.  We finished with 5 goals to the quarter, the last being from a huge mark from second gamer Liam O’Driscoll 40m out and he kicked truly.

The coaching staff was not happy at quarter time and the boys lifted.  An amazing quarter when it became the Smith & Coughlin show, they kicked 7 between them, the only other goal kicker being Sam Bradford.  The team showed fantastic teamwork as well as some inspirational individual efforts.  Our midfielders, led by the skipper, Christian Carnovale and Harry McIntyre were tireless, while Chris Perkins knocked up getting possessions on his wing.

The chain of 5 handballs starting from Scotty Ebbott and ending with Max for a goal was sensational, the 30m sprint by Nathan, a couple of bounces a couple of baulks and then to top it off with the handball over the top to Max for his second goal for the quarter was amazing.  All over the ground we were dominating, and the Preston boys could not get their hands on the ball.  The backs were tight with Joel Melnjak controlling CHB, Pross, Bush and Atkins solid and Crispy coming in to replace the injured Lachie Cairns, the Preston forwards were being starved.  They only managed a solitary point for the quarter.

At the main break, Hampton were 10 goals up and some were predicting a 20 goal win.  Not to be, the Preston boys fought out the second half and while we outscored them by a couple of goals, they were not disgraced.  They got their midfield working and while Benji and Liam in the ruck for us were in control all day, the Bullants were sharking the knockouts and their forwards started holding a few marks.  But the supporters had been spoilt with that second quarter and so, while the boys toiled away on the field, a good number of supporters retreated to the pavilion and lost a bit of interest in what was a dour second half where we were never threatened and turned to the bar!

Good to see Matty Rieniets rewarded for his hard work as he kicked 4 goals for the day all in the last half!  Scott Ebbott with a light preseason had surprisingly lost none of his dash in what was a great display first up.  In the end, Nathan Smith and Max Coughlin with 8 & 5 goals respectively were clearly our best players on the day.

The win lifts the Rovers to second position on the ladder, just behind the undefeated Monash Blues. This week, we face Old Mentonians in another home game at the Boss.

It was another big day at Boss James Reserve, this time for Pink Sports Day as we raised funds for Breast Cancer Network Australia (BCNA). The Hampton Rovers Women’s Luncheon was a sell-out with some 130 people in attendance and a room full of pink! As well as the first-class catering, guests were also treated to a live performance from Joel Bowditch (who took some time out from playing in the Ressies to quickly come into the rooms to belt out a tune!) and special guest speaker Frances Della-Bosa who has been battling breast cancer and made her return to the women’s team earlier in the day. It was an inspirational story and we all wish her the best with the continuing battle. We also had our local Federal Member Tim Wilson in attendance, as well as VAFA General Manager of Football and Umpiring Sam Confait. There is another Luncheon on this week, so get in quickly and book!