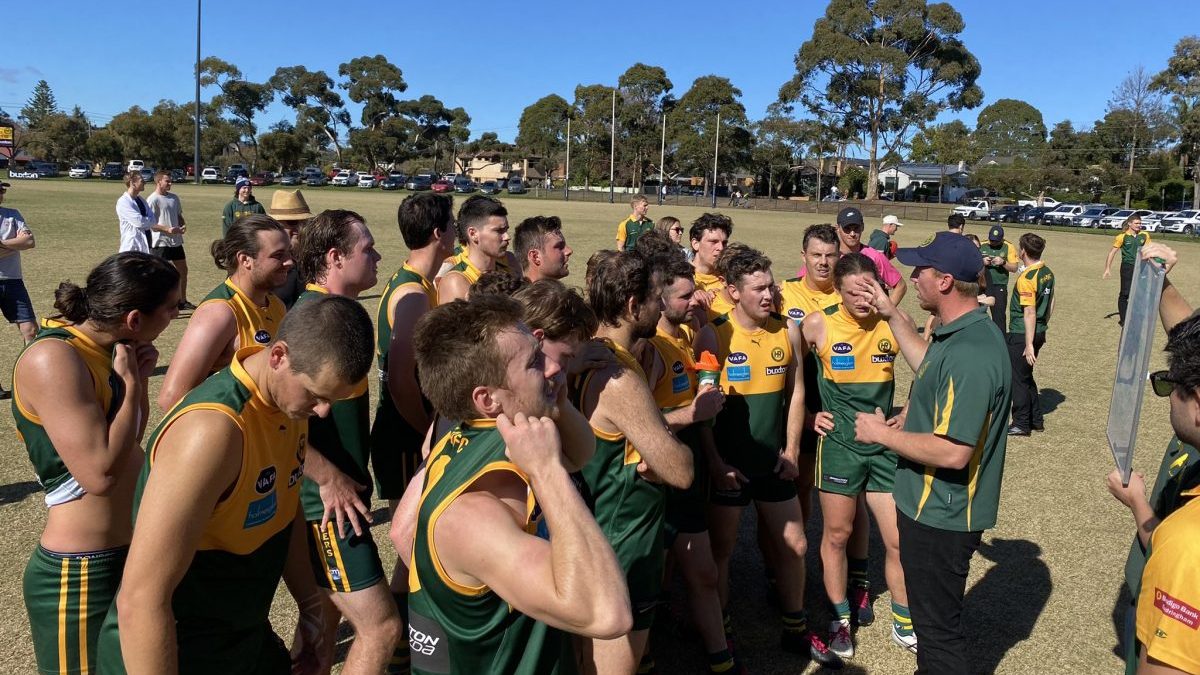 On a beautiful autumn day, round 5 kicked off with the Rovers short priced favourites, but you never know the depth of the opposition, the Preston Bullants.

The first quarter was a regulation start with both teams a few little nervous fumbles, preventing quick clear entry into the respective forward lines. Both teams still getting it deep several times but the opposition defence holding up well. Jewell particularly most impressive across half back. The first goal coming to the Rovers via a poor behind kick in by Preston, picked up by Twigg, who kicked it back over their head between the big sticks. Hodge provided a great centre clearance to Clarke on the half forward flank who converted to a goal on the run. Preston had a few thrusts forward but Roberts was starting to take control and provide great attacking run out of the backline. Twigg had his second goal for the day courtesy of a mark at CHF and then a long bomb. Towards the end of the quarter the Rovers were starting to take control. The linkup hand balls started to take effect and were getting it deep forward but the forwards couldn’t quite hold their marks to take full advantage.

The second quarter was somewhat similar. Preston actually had the first 5 minutes of the play but the Rovers backs were on top and held them out each time. The Rovers got their first via a good running snap shot by Woolston. The second came from a good pass by Gallagher to Jacko at the top of the goal square. Gallagher was soon in it again, adding some needed dash and speed in the forward area amongst the tall timber. He received a very clever pass from Merlo (on the boundary line) and marked and goal. Roberts deciding to get amongst the action with a run from the middle to land the 4th goal for the quarter. The Rovers gaining confidence in the quarter, but Preston still gallantly trying.

The 3rd quarter then started to become a rout. Twiggy nabbing the first goal from another poor behind kick out by Preston. Bottomley scored his first goal via a good pass to him at CHF. Jones his first goal also courtesy another good pass from Dartnell at CHF. It then started to become a Rovers procession. Deighton was getting plenty of the footy and was awarded a downfield free to Jacko who goaled. Jones his second with an off the ground kick. Hodge was again busy and getting better as the game went on – his clearance out of the middle was well directed to Merlo who goaled.

With the game now pretty much over the Rovers continued to dominate. Roberts was smashing it across half back. Bottomley scored 2 more for the quarter courtesy of passes from Roberts and Merlo. Jacko snagged 2 more being on the end of a string of hand balls for the first and a lead honoured for the second. Deighton scored a great running goal after bursting through the pack at CHF. Ballard decided to do the same thing a minute later! It was great to see though that team work was still a priority and the players were all looking for each other. Preston managed 1 point, but the Rovers then carried it coast to coast with clever handballs and kicks until it ended up perfectly in Murnane’s hands, who goaled. Great to watch. Maybe it became a training exercise but it was good to see the smalls (such as Hodge, Ellis and Hug) getting the congested clearances beautifully to the outside runners, who combined well to give great feed to the forwards. Clearly the best teamwork effort for the season.

The confidence was so high, Joel Bowditch even had time to run off  the ground – perform a rousing song to the Mum’s at the Mother’s day Lunch – then return to the field!. Has this ever been done in football before? I’d be surprised if it had.  (P.S. He sang so well maybe there is a spot at the big Dance on the MCG for Joel!.)

Well done to the backs for keeping PB goalless for the quarter again.