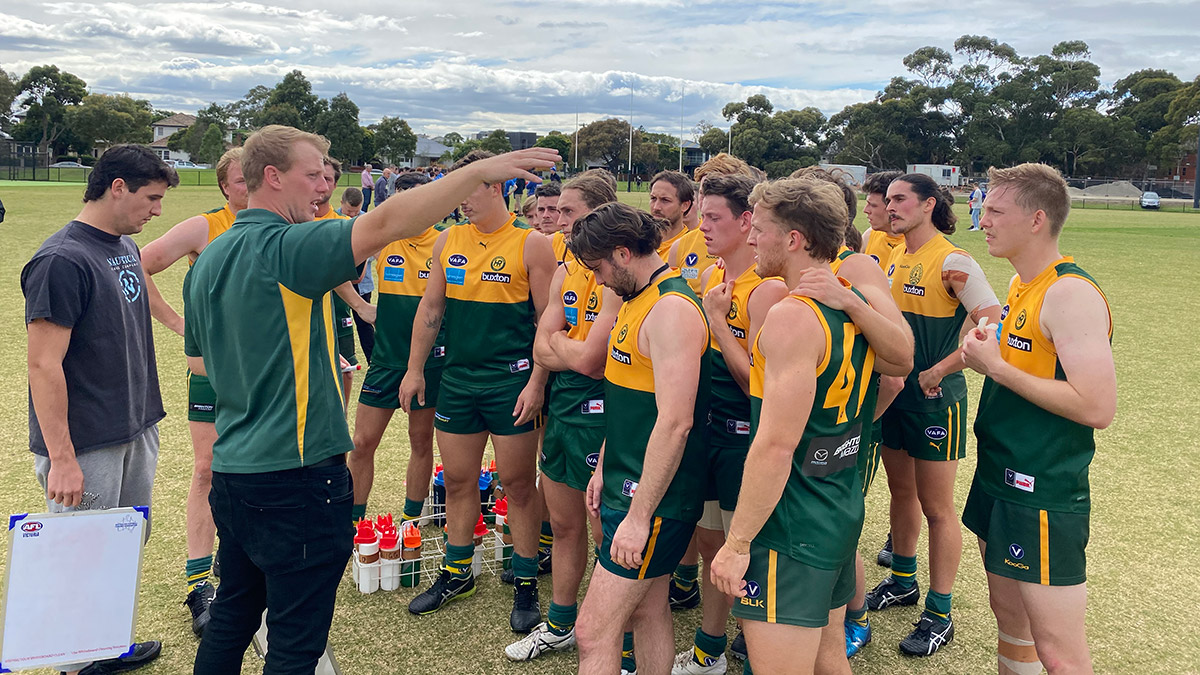 Sitting 1 win 1 loss after 2 rounds it was a match against a highly ranked Monash team.  On paper the team looked OK – some serious experienced senior players in waiting and a lot of new faces to blend in.  A team far from settled though with many in & outs over the weeks.

The first quarter was very even with both sides struggling for clean entry into the forward lines as the tackling from both sides was very good and this kept the match close. The back six were pretty tight for the Rovers while the mids were looking for each other a bit more this week. There were several promising moves forward with good handball link ups but unfortunately a couple of kicks ended the chain in opposition hands sending the ball back again. When it did get forward the area was often congested making it hard for the forwards to lead into open space. The Rovers only goal coming from a great running pressure shot by Nick Murnane.

Credit to Monash who near the end of the quarter took some good lead marks in the forward line to end in front for the quarter.

The second quarter was quickly to Monash’s advantage with an early goal. The Rovers then had most of the play for the next 15 minutes. Goals resulted to Deighton and Twigg and suddenly the scores were very close. Again, we had repeated forward entries but Monash had really marshalled all the troops down back making it very congested and hence causing snap shots to go astray. As often happens, when they finally did break it clear they had plenty of empty space to kick into.  Monash kicked the last goal of the quarter against the run of play. At half time, the scoring shots were equal at 7 apiece which showed the game had been pretty even.

Unfortunately, Monash then found another gear. Whether it was the bright colours or not it seemed they always outnumbered us in nearly every contest. The backs became somewhat under siege and we couldn’t get it past our wings. Monash took control of the air and combined much better on the ground to keep driving the ball forward. They had 8 scoring shots to the Rovers solitary point to really break open the game.

I’m not sure if they dropped the magnetic team board or decided to  “let’s try something different” but the Rovers coaches threw players around to try to find some spark. It didn’t work. Monash really had their confidence up and were really running harder to the contests continuing to hunt harder for the ball. Their teamwork jelled and they ran out easy winners. The Rovers just couldn’t get it past half forward.

Despite the loss – I thought the Rovers were combining better than our 2 previous matches. The hand balling from clearances was good and perhaps taking a few more first options would have made it even better. We actually played through the corridor more to take the game on and several times threatened to get deep quickly only for an unforced turnover to bring it all undone. This brings on the conundrum of seconds footy where sometimes skills can let you down. But then again play slow, safe, wide footy won’t get you the scores to win you matches against the big guns.