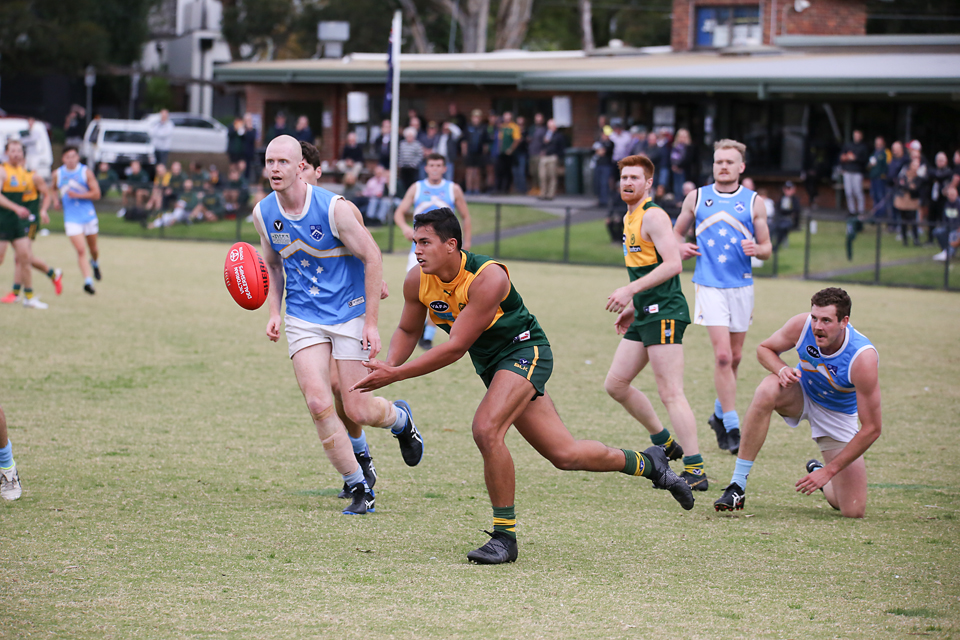 On a day we honoured the fallen, the Rovers fought hard against Monash Blues, but went down by 4 points despite a late rally at Boss James Reserve.

At the halfway point of the last quarter, things were looking grim.  Rain had been falling since half time and Monash in the first half of the quarter had extended their 1-point lead at the final break to 21 points.  They were getting away from the Rovers and a couple of virtual coast to coast goals were a concern.

With the home side down to no rotations on the bench, it appeared the floodgates were about to open to an avalanche of goals from the opposition.  But Hampton steadied.  A strong mark inside 50 to the skipper who kicked truly inspired the boys to fight on.  A goal a few minutes later to Sam Seach from a free kick in the square and we were within a couple of goals.  Ant Folino was in and under and Harry McIntyre was using his strength in the clearances to push the ball our way.  We didn’t have the composure of previous weeks and while the opposition was strong, when we kicked a goal at the 30-minute mark, we were on top and had a chance.  Not to be, the siren sounded, and we went down by 4 points.

A tough game from the outset.  Monash Blues were clearly a bigger team and with their ruck more than a head taller than Benji, you could sense we were in for a fight.  They banged on a quick goal at the start of the game and while we replied quickly, you could sense that we were off balance. Even though the rain had yet to arrive, we were missing targets time and time again and the Monash defenders were having an easy time mopping up.  Pity Corpy and Max Coughlin, whose job was made difficult not only by their opponents, but the sloppy delivery to them.  We seemed to be taking one too many handballs or an extra baulk or not taking the first option that was giving our forwards little chance.

Our two NAB League boys Eren Soylemez and Sam Seach were handling the conditions well and had notched up three goals between them by the main break, they ended up with 4 and 2 respectively by the end of the game.  Our other forwards were quiet, the exception being Ed Turner who seemed to enjoy the tough contest and had a couple of goals on the board before half time and ended with 3 for the game. Scores were close all day.  1 point in it at the first break, 1 goal in our favour at half time.

While the remnants of the big ANZAC Luncheon crowd were enjoying last drinks at half time, the rain started to fall and as visibility deteriorated in the gloomy conditions the arm wrestle continued.  Pross and Traegs down back were firm but injuries were starting to take their toll.   Nathan Smith and Christian Carnovale were getting a lot of the ball but the pressure applied by Monash was causing their delivery to be off song.  Benji had his hands full combatting their giant ruckman and battled hard all day.  The Melnjak’s, Dylan and Joel, kept on fighting and one old Rovers’ supporter said he thought it was like old times when the Melnjak brothers Ed and Robbie ran riot at the Boss in the early 80s!

At the final break, Hampton had Oscar Roberts off with a knock to the head and Luke Deville spending the second half on the exercise bike.  A few minutes into the last quarter we lost Harry Crisp and Dan Corp both to head knocks.  We were forced to play the majority of the last quarter without a bench.

It was clear Monash took advantage of this, banging on 3 quick goals while the Rovers coaching staff made the changes and it was a credit to the boys the way they came back to just about snatch a win in a hard-fought match.

Prior to the main game, the club hosted its traditional ANZAC Day Luncheon and on-ground ceremony. There was another strong attendance inside the pavilion for the lunch. A wonderful introduction by Don Scarlett, an inspirational speech from our guest speaker Jacqueline Pascarl, and it was great to have former and current service people in attendance.

A moving ANZAC Day tribute followed, with the Ode and Last Post echoing around Boss James Reserve. James Newbury MP tossed the coin and then we were way for the clash between the two undefeated sides.

The Reserves struggled, with Monash running big winners in the early game, but it was better news elsewhere, with the Rovers Thirds, Women and Under 19s all recording solid victories. Those match reports will be posted soon.

Next up, the Rovers take on traditional rivals Ormond at EE Gunn Reserve, for what is always a great contest, playing for the Buxton Cup and Barnes Family Medal. There’s a lunch on, which is always well-attended by Rovers supporters, with the catering provided by our very own Hampton Rovers caterers, and the cost a little more expensive at $40 per head. Let Gary Nash know by Wednesday if you would like to attend. Then it’s back-to-back home games for the Rovers, starting with a big Mother’s Day Lunch on May 8 where we’ll be turning pink and supporting Breast Cancer Network Australia.