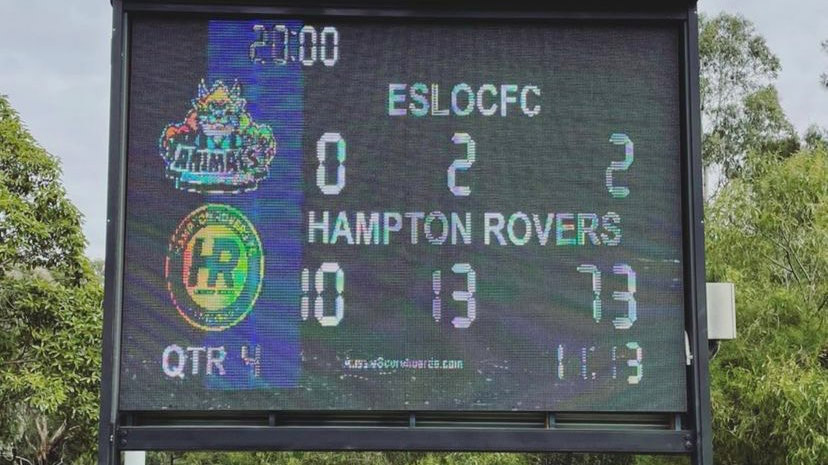 The Rovers Women took on Emma’s St Leos this week at Bennettswood Reserve. It was great conditions for footy and the girls were pumped with excitement and ready to go!

As I was unable to be at last week’s game, this was my first chance to see our ’new look’ team in action so I was almost just as excited!…but this is not about me!!

Anyway, we had around a dozen new Senior Women’s players on the field today (for this season), so it was great to be able to see how they would gel.

Corey definitely had the girls focused and committed, as right from the first bounce the girls were up and running…it was the ‘old’ combo (sorry ladies!) of Bianca Lenarcic and Bree-Anna Kavanagh who combined for the first centre clearance of the day.

There were soon highlights ‘a plenty’ with Casey Politarhis (one of the exiting new brigade) showing dash and courage, Maxine Behnke marked strongly with her usual poise and we were able to work the ball around through the nice skills and balance of Meagan Miller. It was a strong Emily Johnson mark in attack that let to a nice bit of forward work, great snap and goal by the mercurial Hayley Gould. So the first Rovers goal for the match was on the board and we were away. Isabella Cameron (another newby) was getting right amongst it and showing great determination and teamwork. Catherine Devola burst open a pack with pure attack on the ball then through fantastic team play, on the end of a quick fire handball, Shae Raymond put her talent and skills on display by snapping truly!

Unfortunately Emily had injured her ankle in the first quarter and was unable to take the field, this was going to further test the team’s resolve. The second quarter started and St Leos had lifted their intensity but our backline was outstanding led by the brilliant Mandy Naylor who just keeps getting better every year!

Kristy Ebbott was working tirelessly up and down the ground, often sending the ball clear allowing the speedy, excitement machine Jasmine Andros to swoop and take off!

In and under ‘hardnuts’, Savina Dendrinos and Grace McArthur were both playing with great teamwork and were bringing others into the game i.e. handballing backwards when required, which was one of Corey’s main team instructions at quarter time.

Just as we were getting bogged down after a number of missed shots for goal, Stephanie Peacock stepped around 3 opponents as if they were standing still and snapped an awesome goal! The whole team had lifted and the rewards were starting to come. A great quarter of footy by the Rovers!

Again the girls lifted a notch or two going into the third quarter and Isabel Lync marked strongly as she had done throughout the match. Both sides were going in hard and after a number of pack scrimmages, it was Isobel Galloway who entered the fray and scored another Rovers special goal!

Alba Skellern is a perfect addition to the team and was running rings around the St Leo opponents all day and Kellie Worrell was working tirelessly, doing some nice things as always.

Maddie Russell showed how brave and determined she is with her ‘hard at it’ work around the ball.

The final quarter was underway and the Rovers were showing that they were determined to maintain their level of intensity and effort throughout the full four quarters.

There had been some great individual efforts but the girls great teamwork and willingness to help each other out was there for all to see. A great game Rovers, well done!

There was however another injury this time in the last quarter to Kellie Worrell. We wish both Kellie and Emily all the best with their recoveries.