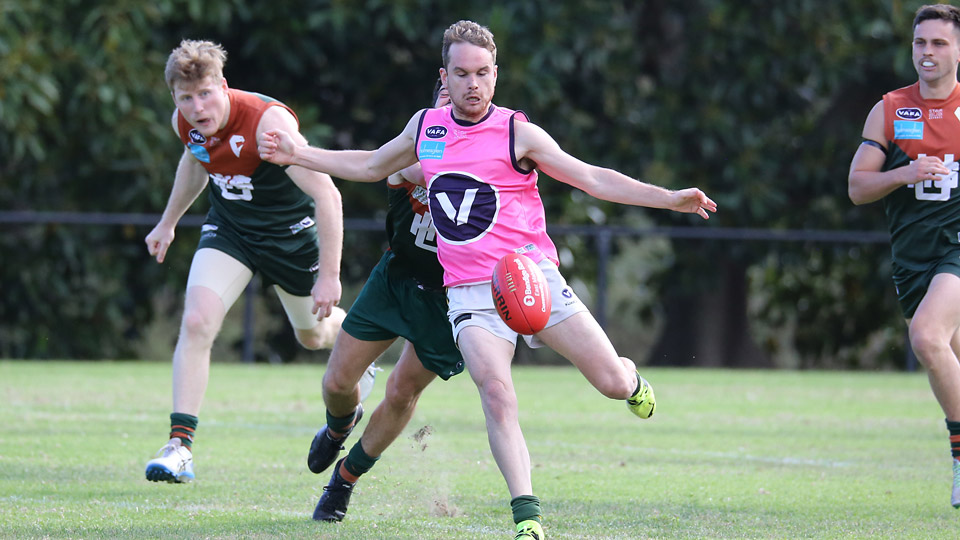 Hampton Rovers took the newly-promoted UHS-VU to the sword on Saturday, booting 30 goals to steamroll the Vultures by 165 points, as the club created history.

By half time of the senior game at Brens Oval in Parkville, UHS-VU had yet to kick a goal against the Rovers, including the Thirds and Reserves in the earlier games. The Women had also played earlier in the day and didn’t have a major kicked against them either. Remarkable.

To the home side’s credit, they never gave up, and their first goal during the third term was greeted by a huge roar. Another quickly followed and they finished with four for the game.

But it was all about the Rovers, wearing pink VAFA clash jumpers, who blitzed the scoreboard from the opening minutes, kicking towards the Melbourne Zoo end, with Matty Rieniets opening the scoring at the three-minute mark. He finished with 4 for the day, along with Danny Corp, while Max Coughlin booted 6 and Nathan Smith 5 as he continues his good form.

The first half was an impressive display. Even in the second term kicking against the wind, the scoring didn’t ease up, in fact, it increased. 17.12 (114) to 0.4 (4) was the half time score line.

The Rovers young brigade are turning it on, with Under 19 premiership players Max Coughlin, Dillon Melnjak and Chris Perkins making an impressive introduction to senior football. Take out Danny Corp, Ed Turner, Richard Atkins Nathan Smith (and Josh McPherson who didn’t play on Saturday), and the rest of the players are under the age of 23, pointing to a good future for the club.

The Rovers backline was solid all day, nullifying any UHS-VU attack forward and converting defence into offence. It appeared the foot was taken off the pedal somewhat in the second half, maybe the Rovers tired, but all in all a huge percentage-boosting win for the Rovers that propels the club to the top of the Premier C ladder.

It was an historic day out for the Hampton Rovers Football Club, with all five VAFA teams recording victories. While the club has had all teams winning on a day previously, this is the first time since fielding five senior teams.

What’s more, all the victories were convincing. Across the five games, the aggregate score was 88.79 (607) to 14.25 (109). The closest content of the day was at Boss James Reserve, where after finally unfurling the 2019 Premiership flag, the Under 19s took on Parkdale Vultures, getting up 105-67 to record their first win of the season. Liam O’Driscoll kicked 5 goals and was best on for the Rovers.

The Rovers Senior Women’s team continue their good form, for what is a new-look side this year after losing around 13 of their Grand Final team going into the season. Bianca Lenarcic returned from the VFLW for her first game of the season, kicking two goals, as the Rovers got up 73-2. Bella Cameron, Hayley Gould and Steph Peacock also kicked a couple each, with Steph named best on ground as the girls make it two from two.

The Reserves game was a congested game of footy, with UHS-VU playing a defensive brand. Inaccurate kicking also cost the Rovers and at half time, it was 27-1, with Hampton kicking 3.9. It hoped up a little in the second half, and the Rovers ran away with it, claiming a 70-point victory. Nick Murnane and Nick Jackson kicked 4 goals each, with Jack Garrow best.

In the early game, the high-flying Thirds made light work of UHS-VU, booting 22.24 (156) while restricting the home side to just the two behinds. Tom Marron bagged 9 majors, with Michael Timmons kicking 5.

An impressive display by all sides and the positive atmosphere at the club continues. Are you a 2021 Club Member? If not, support the club and join up today – starting at just $70.

This week, it’s the traditional ANZAC Day weekend match, with the Hampton Rovers hosting Monash Blues at Boss James Reserve on Saturday. A big luncheon with special guests will be followed by an on-ground ANZAC ceremony including the last post, prior to the main game. Always a special day and we encourage everyone to get along. Further details to come, but book your spot for the Home Game Luncheon online now.