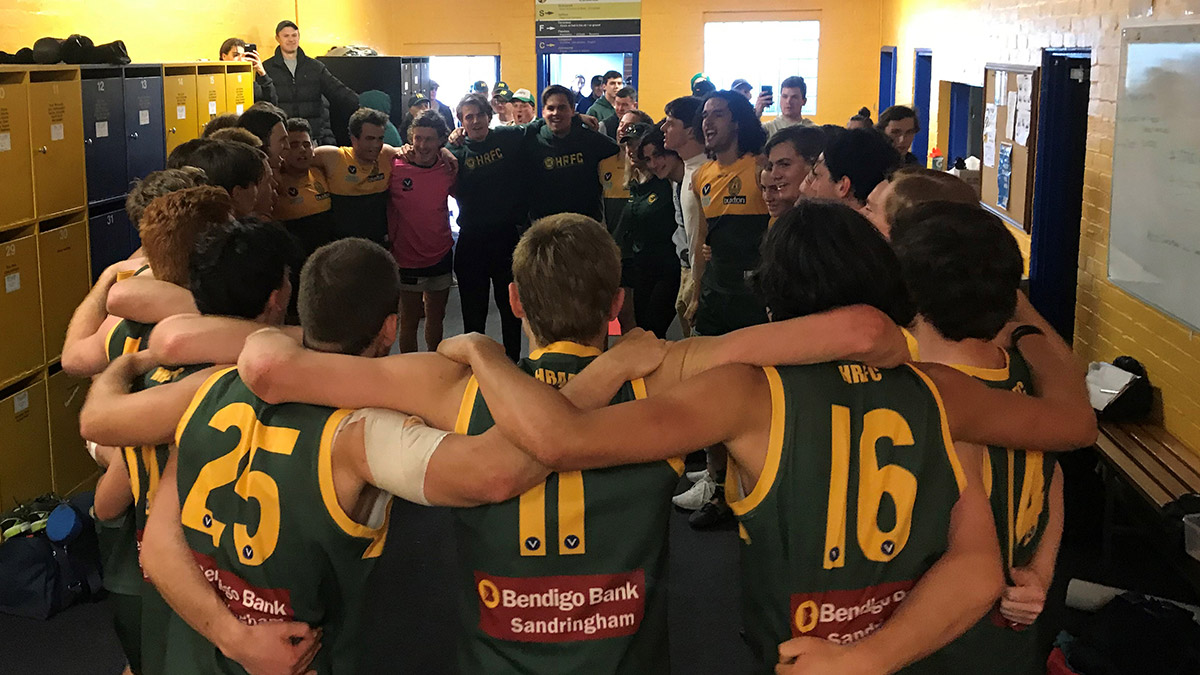 The Rovers Under 19s have progressed to the Grand Final after defeating South Melbourne Districts by 12 points at Trevor Barker Oval on Sunday.

Up against a team who were going to come out hard and no-doubt determined for some payback after the Rovers had denied them in the U17’s Prelim last year. They did not disappoint.

Ben Allan was matching up against their Ruckman with clearances fairly even through the first Quarter. Two early goals to Max Coughlin and a follow-up by Paddy McPhee saw us lead by a slender point at the first change. South Melbourne had more scoring shots, often provided by poor disposal on our part but constant pressure from our back-men saw them spraying the ball for just minor scores.

In what was shaping up as a pretty tight contest, Tom Marron bagged two goals with Cam Morris and Joe Eccles also hitting the board. Quite a few more opportunities missed would have seen a bigger margin than the narrow 8-point lead we took into the main break but the confidence was building with our lads. It was clear they could match the intensity of South Melbourne, just a little more composure with the ball was required.

A welcome return to the side for Matt Spaz this week saw him chime in with characteristic hard-ball-gets and Cooper Watson was solid in defence with great second and third efforts. Great effort fellas!

The third Quarter saw a slow start from our lads and a couple of quick goals to South Melbourne….the lead actually extending to 15 points at one stage. Thankfully it was short-lived with our boys settling down and playing cleaner football as the Quarter wore on. Two more goals to Max Coughlin who has such a good read of the play and sublime overhead skills, led the way as he has done so often this year. Samme Raghdo was also in his element this week on the smooth Trevor Barker ground – one arm fend-offs, hard body in at the stoppages and clearing kicks were a constant. A quiet achiever also this week was Duncan McKenzie – proving his worth with a high possession and tackle count. Good form to carry into next week lads!

South Melbourne once again held a narrow lead at the last break but there was little concern from the Rovers camp. Somehow it never felt as though the game was in the balance.

Chris Perkins, Lachie Fraser, Tate Gramaconi and Tom Goldsmith all deserve a mention this week with solid ball use all game and just doing the team things – keeping the ball in front, shepherds, support running and strong tackling pressure all game.

Ben Marron chimed in with a goal in the last, along with Cam Morris and Max Coughlin added yet another for a total of five for the game and a very well-deserved B.O.G.

South Melbourne were never really far away on the scoreboard but it was becoming clear that our lads had the answers when needed. In the end, a 12 point win and a berth in the Grand Final next week.

The U19 Div 2 Grand Final between Hampton Rovers and Glen Eira/Old McKinnon will be played on Saturday morning, 9am at Elsternwick Park.