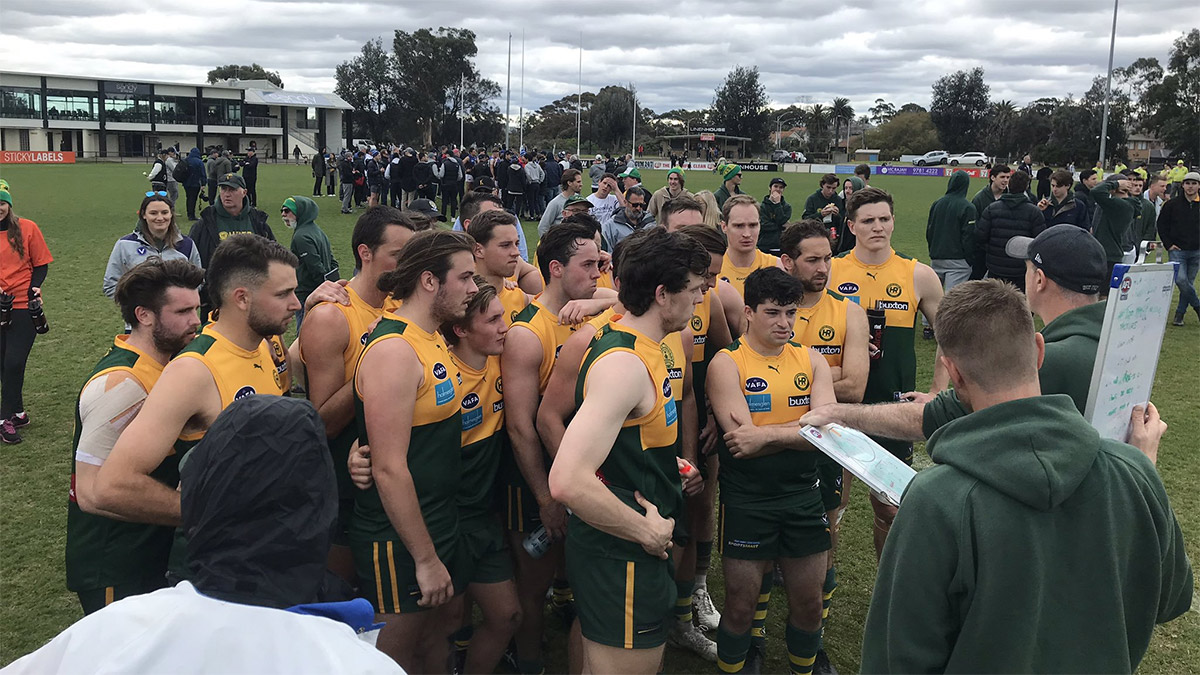 The Rovers Reserves went down to Ormond by 20 points in the Semi Final at Trevor Barker Oval on Saturday.

From the start of the game, the Rovers always seemed to be on the back foot.  The contests in the ruck were neutralised, the mids run and carry although the centre was good but not consistent enough, the forays forward all seemed to be just off target which caused problems for the boys.

Ormond opened their account with a strong mark at CHF, we responded almost immediately when the tap from the ruck hit Zaina at full speed and the long bomb forward was spoiled and then sharked by a nippy Hug who goaled with the snap over the shoulder. We were battling hard, but it just wasn’t working.  Lynchy was sensational across half back, he had 4 critical contested marks at the first break.  In fact, the back six, who were under pressure all quarter held their ground and it is a credit to them that the margin was not greater!  We were going goal for goal with Ormond and while we were not playing at our best we were hanging in there!   Ormond seemed to be getting the rub of the green and the stats backed this up!  While we were 1.2 down at quarter time we weren’t too concerned given the starting performances during the year.

We started the second in fine form when Zaina, picked up the loose gall and goaled we were on the move.  Shortley after, Gaggs picked up the loose ball and drilled it from 20m out.  We’d outscored Ormond 3 goals to I for the quarter but we were not looking comfortable.  Our fumbling and poor decision making were a worry but we held sway on the scoreboard.  Relax?

As half time approached we were looking the goods, Shem Curry was a stumbling block for the opposition.  Josh Pavlou took a number of intercept marks and  Clemo, for an almost retired player, was providing huge drive from the forward line, Gaggs was always going hard at the ball and Huggy was trapping the loose ball from our forays forward.

In the third quarter the rain started to fall and the scoring dried up.  We just couldn’t put a score on the board and while Ormond kicked 3.4 we only managed 0.3 for 25 minutes of footy.  The balance had changed and unless we picked up our game the result was slipping away. Darcy Merlo was presenting and providing the outlet.  Jack Daley, through the midfield was providing the option and causing concern for the Ormond midfielders.

The first 10 minutes of the final quarter was played in Ormond’s half and despite our desperation, we could make no progress. When Ormond scored, the margin was the greatest of the day.  Our Irish import Eion Culligan was using his speed and strength to advantage and on a number of occasions opened up the forward half with his run and carry.  The umpiring gods then joined our side and when the Ormond back was penalised for rushing through a deliberate behind and we were gifted the goal both Ormond and HR supporters were gobsmacked!  Shortly after Jess cleared the ball forward, Nick Jackson spoiled the pack, Jess D picked up the loose ball and in a flash we were back in the game.  Jack Zaina pulled down a couple of good marks and the skipper, Nick Jewel, who’d copped a big knock earlier came off second best with an old Ormond legend!   When the legend, Martinov, goaled from the set shot at 40m it was game over and while the boys fought out the tough battle in ordinary conditions, Ormond was home.

As coach Anton Duddy said after the game “a great season for the Ressies, to battle so many injuries and unavailabilities during the year and perform so well in Premier C was a credit to all the boys”.