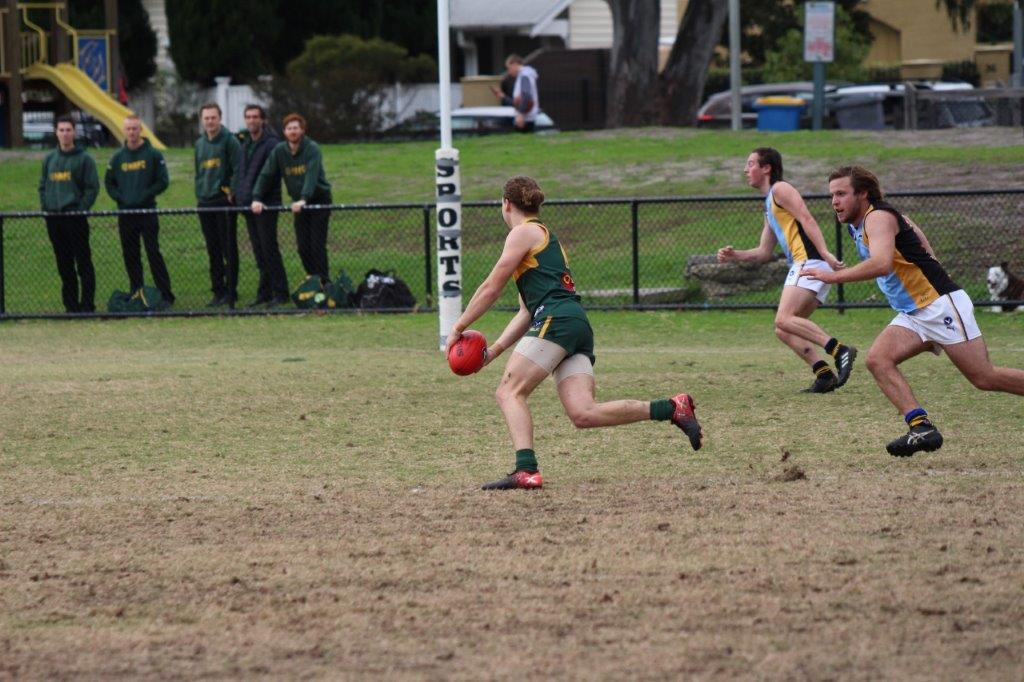 Round 18, the last of the home and away games for the season presented the Rovers U19s with a big challenge, fronting up to Marcellin College on a very windy, gusty day to face off for second place on the ladder and the double chance going into finals next week.

Having been jumped early last time we met them, the Rovers were pumped and ready, with no intention of letting that happen again and came out firing from the beginning. With Tate Gramaconi, Oscar Donald, Ben Marron & Cam Morris all hitting the scoreboard in the first quarter with the wind. Marcellin still managed 2 goals against the wind, so there was more work to be done in defence. The team would need to tighten things up and push harder in the 2nd quarter to hold them back when they got the wind.

The Rovers turned up the pressure and even though Marcellin did get a lot of the ball into their forward line they did not kick straight and kicked 1.4 for the term and we managed 1.3 ourselves, Oscar Donald kicking his second. We were without our usual ruckman Ben Allen this week so Coach Sam Care tried something new and threw Joey Wilson into the role, chopping out with Mac Young when he needed a breather. Joey seeming to be loving the new role and left Sam wondering why he hadn’t tried this earlier, “Great game Joey”, I would say your best so far.

With the wind again in the third quarter, the players stepped it up and banged on another 5 goals 2, goals went to Lachie Fraser 2, Tom Marron, Ben Marron, Joey Wilson. The Marcellin team did not score at all. The Rovers clearly wanted the win more than Marcellin, I even heard a Marcellin Parent say and the way the Rovers played yesterday that was evident. We went into the final term 70 to 22, a handy lead.

Marcellin had the wind in the final quarter but Rovers were not giving this game up. We managed to out score them with straighter kicking 4.2 with extra pressure from the Rovers and another outstanding game from Max van der Straaten and Harry De Wolf in defence, Marcellin let themselves down kicking 2.4.  Rovers who scored into the wind were Samme Raghdo, Dillon Melnjak, Lachie Carrigan & Ben Marron for his 3rd. In a game where we had 2 opponents Marcellin and the wind the Rovers did very well to come out on top 14.12.96 to 5.8.38.

Thanks to our volunteers & supporters who made the trip out to Marcellin to support the boys. Goal Umpire – Paul O’Driscoll, Runner – Will Morris, Time Keepers/Scoreboard – A. & F. Spaziani & M.Starcevich(S/B), Interchange Steward – A.Gramaconi, Water runner – Brad Young, Jumper cleaner – Brad Young! Special thanks to K.Melnjak for giving me extra help yesterday as well.

Now the attention turns to the Finals! The Rovers play minor-premiers Glen Eira at Packer Park on Saturday at 11:40am. The winner goes straight through to the Grand Final. Get along and cheer on the boys!