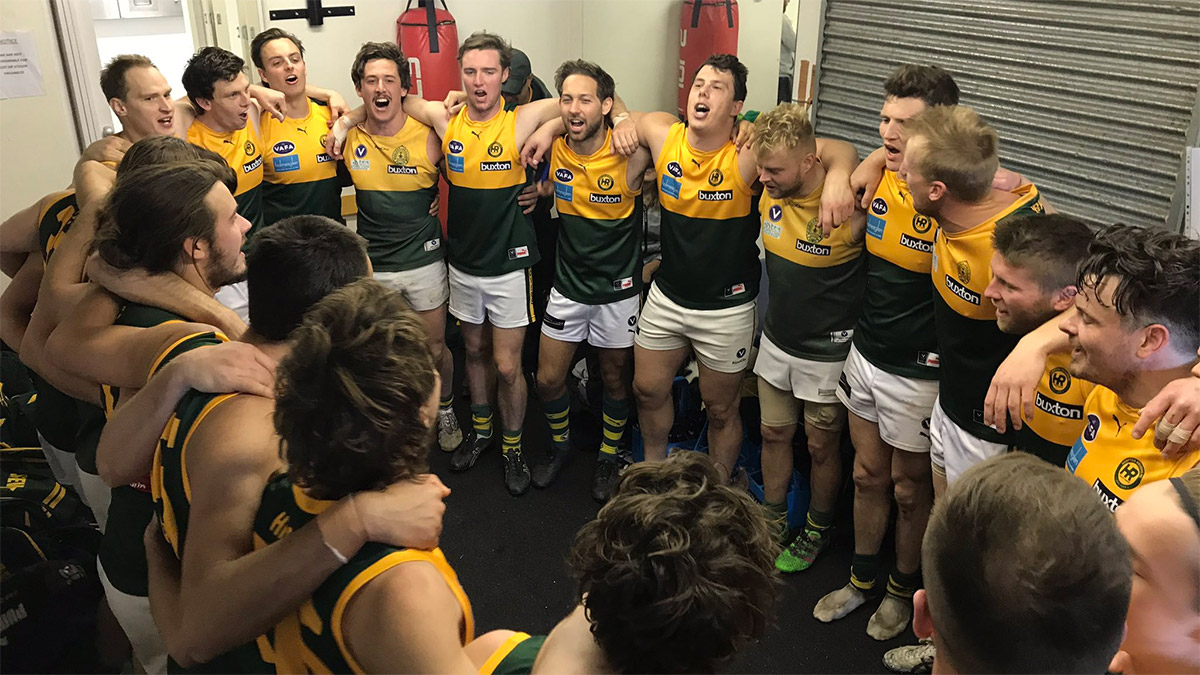 The Rovers Reserves headed to Albert Park to face Ajax on a Saturday that was sunny, but a very breezy day with the North Westerly pushing the ball to the half forward flank at the southern end.

As somewhat has become a pattern the Rovers were a little slow out of the blocks and Ajax had a clear game plan to push it wide to make it difficult to score. And it worked to a degree with goals hard to come by. With 4 points on the board it took 14 minutes into the game for a great string of handballs starting on the wing with Huggy to Clemo to Duck to a couple of more Rovers to somehow see the Duck somehow be teleported deep forward to be on the end and kick the opening goal on the run.

A couple of minutes later after a ballup on the wing it was a clever collect by Shem, a clearing handball to Clem, another clear hand ball to Huggy running past and he bangs it through for the second goal in quick time. Suddenly it looked easy. Barely a couple of minutes later after a bit of a contest Irish had the ball wide and spotted a free Shem so hits him up by switching play across the ground who then quickly kicked long to where one of the littlest blokes on the ground (Huggy) read it well to take good contested mark – go back and slot his second from 40 metres out. Suddenly the Rovers had skipped to a clear lead even though we were wondering whether we had made the most of the wind as we headed to the first break. I didn’t think so as we often helped Ajax by continuing to play wide into attack rather than switching play back across the middle to open up the goals from across half forward. But overall the Rovers seemed to be on top with few entries into their back half.

The second quarter started well with the Rovers getting it deep forward for the first 4 minutes but then the Jackers used the wind to advantage and with 3 long kicks from deep back they suddenly had a mark deep forward and a goal! The Rovers then continued to get it out of the centre and kept it deep forward. Zaina had some fire in his belly and set the standard with some vigorous tackling while Tait, Duck, Lovig, Merlo and Huggy were all playing well. But somehow Jackers again got it forward against play and suddenly had it in attack into an open forward line for a goal off the ground This was at the 9 minute mark or a 25 minute quarter!

The Rovers yet again cleared it from the centre bounce but in a repeat the Jackers had the rebound attack and with quick movement got it into their forward line for their 3rd crumbing goal and suddenly it was game on at 15 minute mark. To Rovers’ credit though it was then 10 minutes of good attack and control to prevent any further run on by Ajax.  There was good short passing into the wind to maintain possession and any errors were quickly snubbed out by great tackling and pressure to in turn cause a turnover.  Lovig was continuing his great form in the ruck, Terj playing well, Jewell as well making his presence felt. Really the Rovers had 75% of the play but there seemed to be some weird force field across their goals and managed 4 points when they were unlucky not to convert, while the Jackers made the most of it with very few forward entries.

The Rovers were playing with plenty of intensity and vigour and with 11 scoring shots to 3 were on top, but with only an 8 point margin it pretty much summed it up that possession and efficiency can make a mockery of the stats.  Ajax with barely half a dozen forward entries were still in the game.

So we started the “premiership” quarter – in somewhat familiar fashion. Jackers continuing to relentlessly push it into the dead pocket/flank and the Rovers obliging by keeping it there. Sharry was brilliant across the wing taking mark after mark to push it deep forward. Zaina finally breaking the goal drought, fending off a tackle and then snapping a goal at the 7 minute mark. At the resulting centre bounce Clemo did the perfect tapout to a running Douggie and bang it was suddenly in the safe hands of Jacko who marked strongly. Unfortunately, the boots didn’t respond and he missed to the leg side. (Sorry watching cricket while I type.)

When Sharry again took an intercept mark across the wing he got it long to a rampaging Zaina who kicked his second snap goal with a clever banana kick. Jacko had another missed shot soon after but then made amends when the resulting kick out rebounded into the forward line and he laid a great tackle to be given the free and then converted from a very difficult angle.

The last quarter was then about whether it would continue in the same vein or Ajax could get a run on. But it was pretty much same same. The Rovers having most of the play getting a further 3 points – but missing at least 5 very gettable goals where the magical “force field” refused to let it through. Ajax were having a few more forward entries but Pav was the wall on the last line of defence and Lynchy also taking his usual share of intercept marks. The vigour by the Rovers continued and led to a few turnovers by the Jackers who were anticipating it when it wasn’t quite there.

Next week a must win against the winless bottom team to guarantee a finals spot.