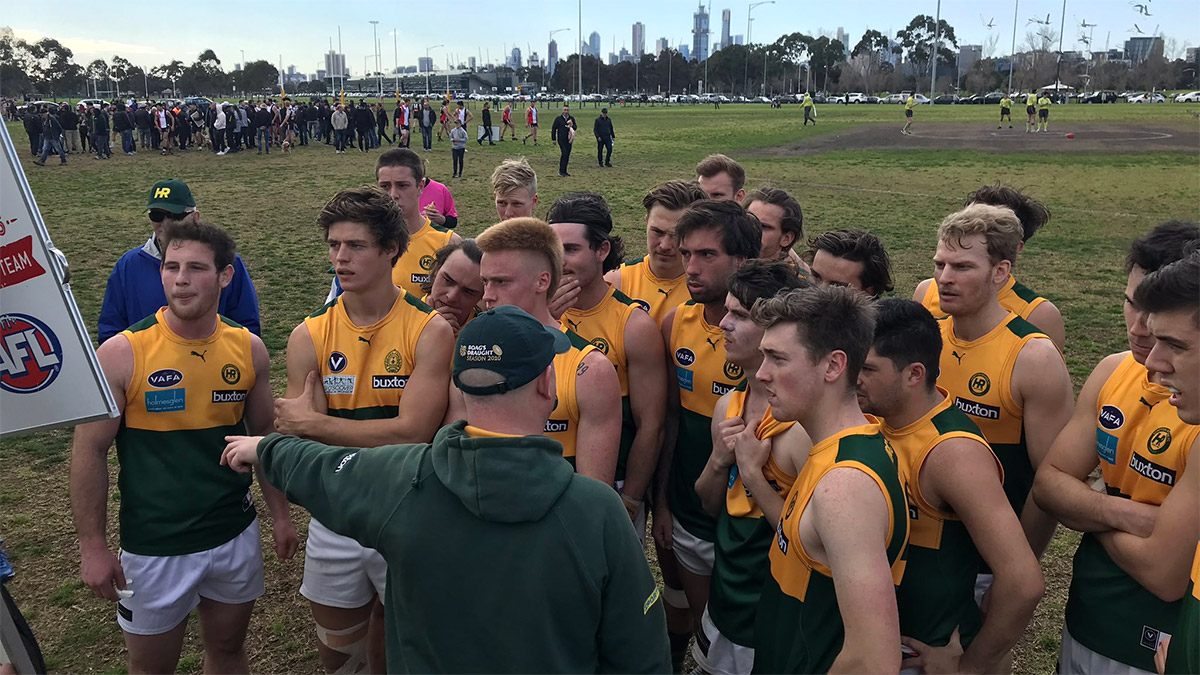 The Rovers went down to an in-form Ajax at Gary Smorgon Oval by eight points on Saturday.

The damage was done in the first quarter.  A howling gale favouring the southern end, generally on top of Ajax, yet if our 1.4 had been 4.1 what a difference that would have made.   A 10 point lead at that point was unlikely to be enough.  It was going to be a tough game with the poor ground conditions, but with Christian Carnovale back in the fray throwing his body in with abandon, Corpy laying a couple of crunching tackles and TJ pulling down a couple of big marks at half back, we were looking strong.

Josh Broadly, again, against a far bigger opponent, just kept jumping and winning the taps and the Rovers mids, in Fogs and Pross, were winning the ball.  The only goal for the quarter came when Blake Bergman centred the loose ball to the top of the square and Bubbles pounced and popped it through before the Ajax backs knew what had happened.

Against the wind in the second and the Rovers backs held firm.  Joel Melnjak was strong at CHB, Ben Kneebush was having a day out at half back, where he always looks comfortable, Crispy getting better with every game and Corey Jones was hard at the ball and his man and was presenting for the outlet pass.  The only goal for the quarter came when the umpire gifted Ajax with an easy goal as a result of a free kick.  As in the Reserves, it was virtually impossible not only to kick a goal, but even score at the northern end.  Corpy was at this best and his work as the loose man down back was a treat as he time and time again intercepted the Ajax thrust forward.  At the main break, scores were level and it was critical that we used the wind to advantage in the third.

Hampton started well with Cam Hetherington in his first game in a month marked at 50m, and calmly slotted the long goal.  Broads was dominant in the ruck but we just couldn’t seem to capitalise on clearances.  The skipper was hit hard from an Ajax bump and while recovering the Ajax boys ran the ball forward to score the only goal of the game into the wind.  When they scored again a couple of minutes later, we were in big trouble.

Fortunately, with Rich Atkins roving forward, he picked up the loose ball in the centre, baulked an opponent and from outside 50 bounced through a lucky goal.  This gave us a spur and a couple of minutes later Harrison McIntyre, who had been showing his pace and strength all day, snapped a desperately needed goal at the 32 minute mark of the quarter.  In a flash, Ajax ran the ball forward and at the 34 minute mark, kicked their third for the quarter and our lead was only 2 points.

The boys didn’t give up.  They fought out that last quarter with great desperation.  We kicked the first goal of the quarter when Scotty Ebbott earned a free close enough to goal to boot it through.  The rest of the quarter it was a seesawing battle, but the advantage of the wind had its effect on tiring bodies and the Jackers managed to kick two more for the quarter to give them an eight-point win.

Things only deteriorated further when news came through that Old Camberwell knocked off PEGS, running over them in the last quarter to put the Rovers only 2 points clear of relegation and making a win in the final round critical, against Old Mentonians at the Boss.