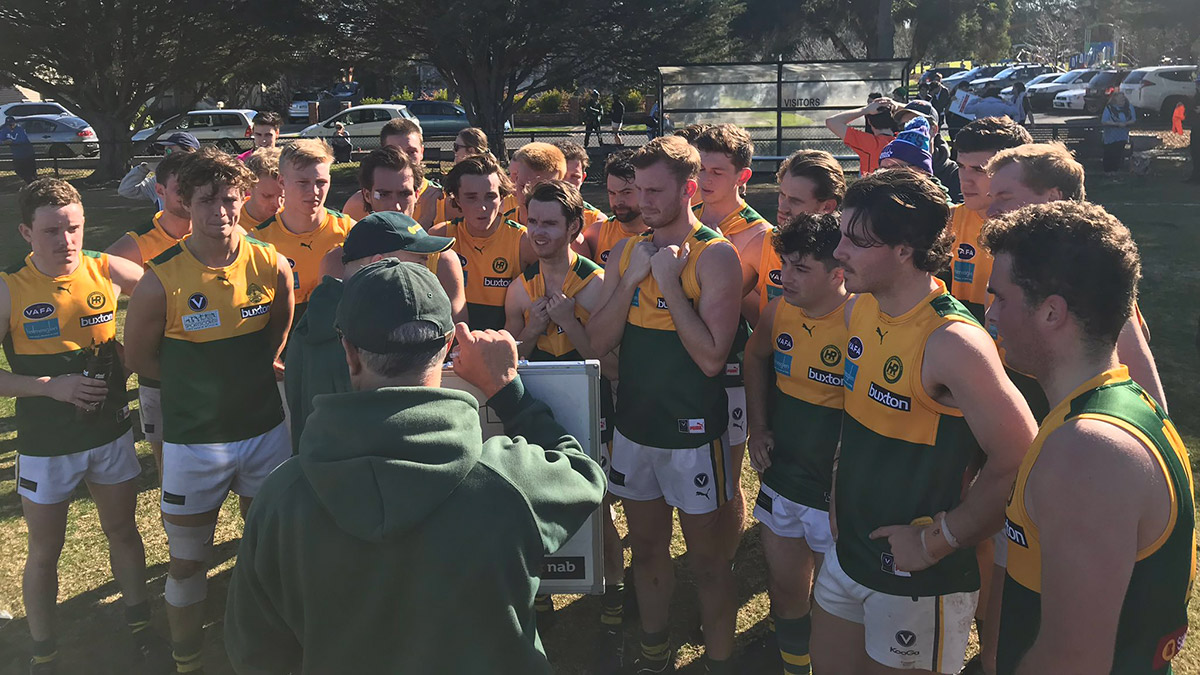 While over 25 Rovers supporters enjoyed the hospitality of the Monders Luncheon on Saturday afternoon, the day ended quietly with the boys being run over in the last quarter by a rampant Ormond.

Hampton defending the clubrooms goals in the first term and the boys started well. Corey Jones in an unaccustomed position of CHB looked comfortable and repelled a number of the oppositions forward moves. Crispy was in and about and linking well with the back six.  Both sides were struggling going forward on a day when the conditions were probably the best they’d been since the double bye.  Oscar was making position well, Jacob Gray was presenting and the skipper, Christian Carnovale was in the play but looking a little rusty in his first game of the year.  He missed a couple of early chances that he would have usually lapped up.

Up from the Under 19s and playing in his first game, Chris Perkins looked comfortable on the big stage.  He appeared calm and relaxed and his disposal under pressure was a delight.  The Rovers were lucky at the first break to be only a goal down – the boys were under pressure.

In the second quarter, it was all Ormond.  Fortunately, they only kicked 1.5 to our 1.3 but our sole goal came in the last seconds of the quarter.  Broads was playing well in the ruck against a giant of an opponent, Pross was hitting the packs hard and Harry McIntyre was getting a lot of the ball.  We struggled going forward.  While Ben Kneebush was doing some good work and Brendan Culvenor busy we just couldn’t break free of the Ormond defence.  At half time, the Rovers trailed by 14 points.

Finally, urged on by Quonny’s words, we switched on in the third quarter.  A quick goal when Carny handballed to Sammy Bradford in the square. Perko was continuing his good form down back.  At the 9-minute mark Jacob Grey was taken out by friendly fire and his knee was looking grim.  Oscar Roberts who was presenting well finally pulled down a big grab and kicked the goal.  The Monders replied with their sole goal for the quarter, a cheapy from the square.  Two goals down and into time-on and it was the youngster Chris Perkins who snapped from 20m out for his first goal in senior footy.  Not long after Sam B fired a slick handball to Naha who calmly slotted the goal on the run.  Scores were level at the final break and the boys were fired up.

The flame went out!  The Ormond boys ran riot, an 8.5 to 1.2 quarter and the Rovers were crushed.  The older and bigger bodies of the Monders just crashed their way through the Rovers defence and the floodgates opened.  Our only goal came from a nice snap from Ben Kneebush from 30m but otherwise it was all Ormond.

The only good news out of the game was that scans showed that Jacob Grey’s knee is not as bad as first feared. This week, the Rovers travel to Albert Park to take on Ajax in the second-last game of the season.