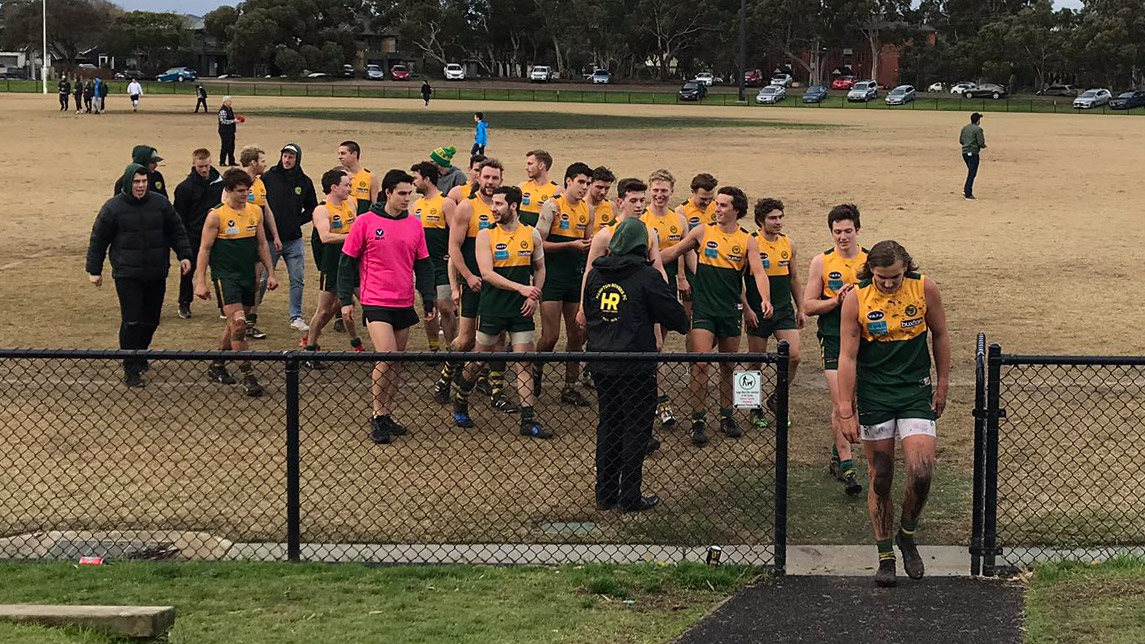 A crucial 24-point win for Hampton over Old Camberwell at Boss James Reserve on Saturday has seen the Rovers all but avoid relegation from Premier C for 2020, as the club recorded five wins from five, for the first time in 90 years.

Following a poor run of results, bringing in just one draw and five losses since round nine, another loss on Saturday would have seen the Rovers just two points clear of the relegation battle with, three games remaining.  Fortunately, the boys lifted in what had been built up as a Grand Final, and with some handy inclusions, rolled Old Camberwell. Only three losses to close out the year, and three wins to Old Camberwell, will see the Rovers drop back to the divisional sections.

Again, very ordinary conditions at the Boss and many of the 80 or so luncheon attendees didn’t leave the warmth of the clubrooms all afternoon!  A very low scoring affair which for a large part of the afternoon was fought out between the 50m arcs.  While Josh Broadley faced a man mountain in the ruck (former Hawks premiership player Rob Campbell), he was using his leap to advantage and just kept jumping over him – his hard work in the first quarter was rewarded with the Rovers only goal for the term.  A long bomb on the run from outside 50. Great to see Adam McNeil back in that role across half back and his generalship there gave us options we lacked in past weeks.  At the first break, the visitors had three more scoring shots, but trailed by a couple of points.

In the second quarter, with the benefit of the breeze, we hit out straps and peppered the goals.  The Rovers backs were solid with Rich Atkins roaming, Crispy and Joel Melnjak  secure at half back and youngster Harry DeWolf gaining confidence as the game progressed.  When Charlie Miles took the free in the pocket the Rovers bookies had him at 125/1 to score… he split the middle with the check side boomerang!  Jacob Gray followed up quickly with a great mark just outside 50m and kicked truly.  A great effort.  We were 3.5 to 0.6 at the main break and while not home and hosed the mood was confident.  The elusive James Prosser was at his best, whether darting left or right he always seemed balanced and his accuracy whether by hand or foot was precise.

In the third, against the wind, we battled it out.   OC opened with an easy goal. We were asleep.  Broads was winning clearly in the ruck, Ben Kneebush having an effective game on the ball and Hodgy and Scotty Ebbot working well in the midfield.  My hopes soared when Charlie Miles crashed the pack, took the ball and the snap looked true until it veered into the post. Shortly after a great mark to Oscar Roberts outside 50m ended in a goal.  OC quickly responded but when Danny Corp cleared from the ensuing centre bounce, Harry McIntyre collected and handballed to the rampaging Corp who neatly slotted the goal on the run I thought the tide had changed and we were home.  OC had only scored from the stoppages and a couple of silly free kicks we had given away.  The coach made the players aware of this at the final break.  Our injury woes continued and when Fogs left the ground with a cut eye our bench, for the 5th week in a row, was under pressure.

The Rovers were heading home with the benefit of the breeze.  For nearly 13 minutes, no one scored.  Finally, Tim Jones marked in the centre square and his long bomb forward was grabbed by Oscar Roberts who made no mistake.  Both teams seemed to lift their intensity, the Rovers sensing victory and security in Premier C and the OC boys staring relegation in the eye.  An easy goal to Old Camberwell was quickly followed by a huge kick from Harry McIntyre which split the middle with a few minutes remaining and extended our lead to 23 points.  The Wellers didn’t give in and when their player broke the lines and went for home it was Harry Hodges who saved the day with a 30m sprint and great tackle to earn the match ending free kick.

Plenty of relief around the Boss as the final siren sounded, confirming victory for the Rovers. Next up, it’s an away clash against arch-rivals Ormond at EE Gunn Reserve.

For the first time in the clubs history, all five senior teams won on the weekend, including the Senior Women winning their Prelim Final to advance to the season decider. Match reports are now up on the site.