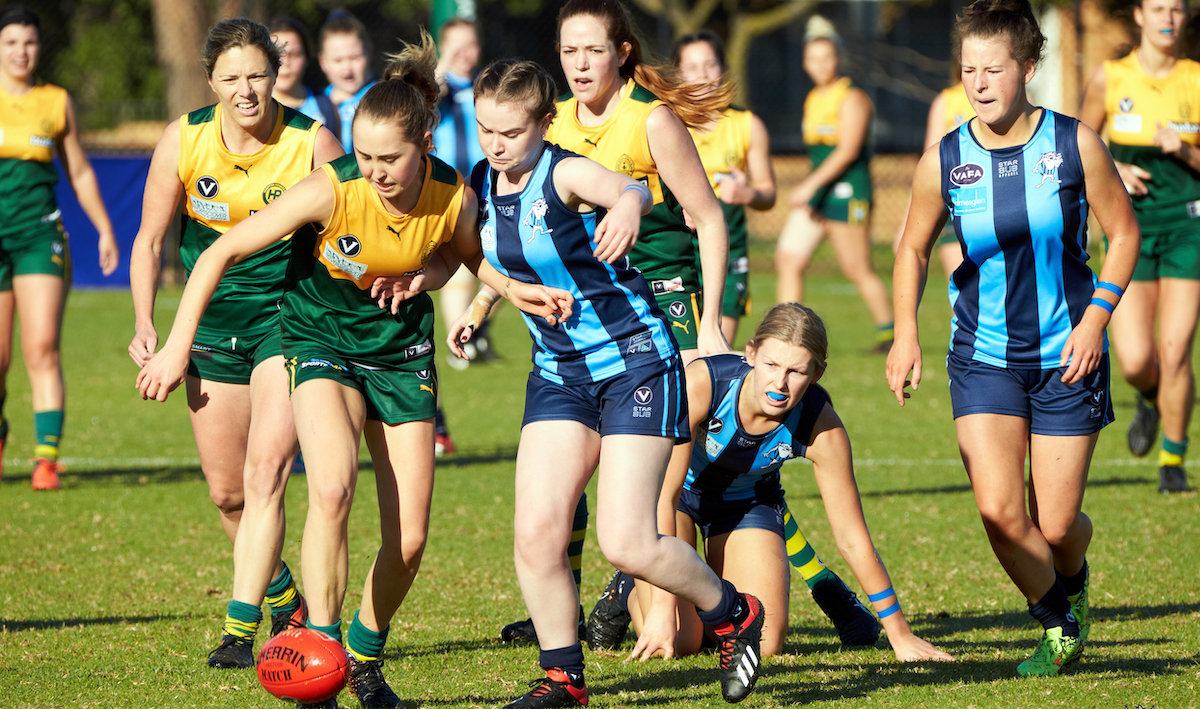 The Rovers Women’s team played Emmaus St Leos in perfect footy conditions at the Boss and recorded a big victory in the final game of the regular season and will now host Oakleigh in the Semi Final at Boss James Reserve this Saturday.

A few players were still sitting it out due to injury, however up against second last on the ladder and with confidence high, the team was  expecting to do well…that turned out to be a massive understatement!

Before you could blink we had turned it on with a great first quarter kicking 6.3 to no score! Everything that we had been working hard and building towards throughout the year had clicked into place.  The teamwork, the pressure and willingness to get to each contest to support each other was there and it showed on the scoreboard.  Even our goal kicking was much, much better. Goal scorers for the quarter were 2 to Hayley, 2 to Zara and 1 each to Kaitlyn and Bianca.

The main highlights in the second quarter belonged to the Atta Sisters. Shortly after Lucy had taken two strong marks in defence, Grace took a clever mark in the forward line and converted her very first goal for the Rovers!  Our strong team spirit really showed when all the girls got over to Grace to congratulate her.

We basically continued on from where we left off in the first quarter however the only downside was that our accurate kicking for goal had dropped off but this was also due to St Leo’s improved pressure.

In fact, our score showed a complete reversal to the first quarter. We had 9 scoring shots in both quarters but instead of 6.3 we kicked 3.6. This shows how critical kicking for goal can be particularly come finals time in closer games.   Our goals this quarter were 1 to Grace Atta (as mentioned above), one to Amy (following a smooth pick up on the run) and one to Tarryn (a great running long goal).   When St Leo’s did get the ball forward Chloe was nearly impossible to get past. She continually intercepted the ball, won the contest and kicked it to our favour.     It was Rovers 9.9.63 to St Leos 0.1.1 at the main break.

Our talk had dropped off so Paul and Corey made sure that we addressed that in the second half. Otherwise everything else was being done really well and the coaches were happy!

Taylan was running riot, as she does, Tarryn was controlling the forward line and Zara was simply having a day out!  It was a pleasure to watch, particularly some of the ‘second efforts’ of our team, such as an awesome shepherd by Mandy and a fantastic smother by Kaitlyn.

We scored just the one goal for the quarter through Taylan. We also went a bit wayward again in kicked 5 points!

You had to admire St Leos who were battling the game out in good spirits and with strong endeavour…especially as they were under-womanned with only one on the bench!

Paul had asked our girls to use quick handball, wherever possible to get the ball moving and get everyone into the game. Maxine was showing the way and soon Taz was on the end of some nice teamwork for a mark and then her second goal.

Kate on our backline was doing a great job and whenever the ball came down she was there to assist. There was excellent work being done as a team and Taz added another for the quarter and Amy’s shot after the siren fell just short.

All in all, a very convincing 94-point win. The Rovers Women now host Oakleigh Krushers in the Semi Final, this Saturday at Boss James Reserve, starting at 10:45am. Let’s get a big crowd along to cheer on the girls and help create history!