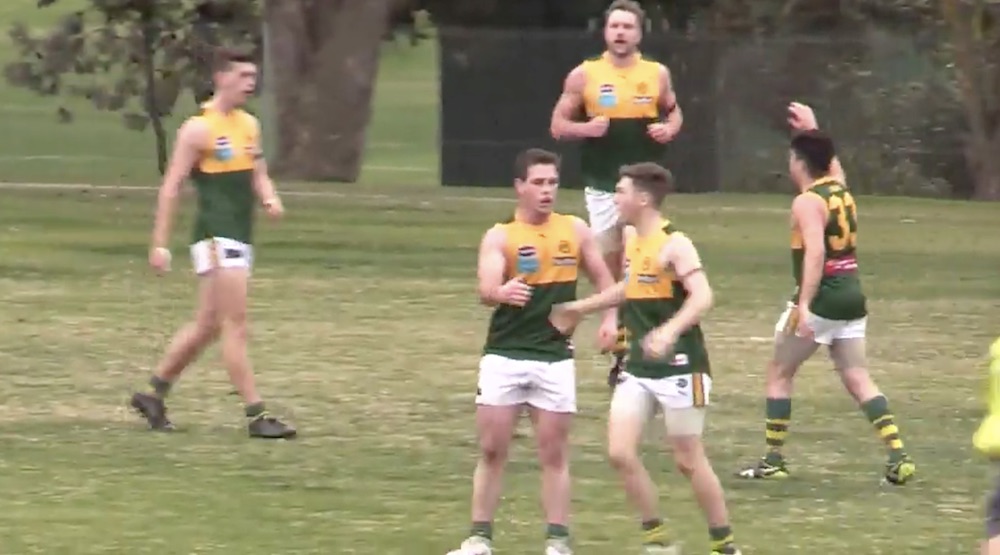 In the first half, the Rovers had been unable to put any scoreboard pressure on the Marcellin boys and it was looking grim.  Player unavailability is making winning games tough, in fact, of the 22 that hit the field on Saturday, only 12 played in our last win in the first half of the season.

The first quarter was notable for our poor disposal.  Yes, we kicked 1.4 but add to that 3 shots that went out of bounds, 2 that should have made the distance and a couple of shots that didn’t occur as we were too slow in getting boot to ball.  What could it have been? The boys were working hard but not just getting the rewards. TJ continued his good form of recent weeks, Pross, captain for the day was his usual in and under self and Josh Broadley back in the ruck after the enforced holiday hadn’t lost form.

The second was a repeat of the first, we worked hard, had as much of the ball as the opposition but just couldn’t score.  As I sat on the elevated spectator area at Marcellin I couldn’t help but ponder how we missed the 5 players with off field duties on the day, Carnovale, Traegs, Pav, Jackson Manning and Cam Hetherington!  Charlie Miles was going hard in the ruck and throwing that big body around, the London Swans connection, Eoin Culligan having his first game, displayed some Gaelic footy skills and for a bloke playing only his second Aussie rules game in Australia he showed promise.   Ben Kneebush off half back was getting a lot of the ball and delivering it well. He did that all day.

At the start of the third quarter the Rovers switched on.  We kicked 5 for the quarter with Harrison McIntyre playing his best game for the club, using his strength and speed to break the lines and shrug off tackles.  We let Marcellin in for a couple of cheap goals but we were on top and the question was could we continue? Our plight wasn’t helped by injuries. Ant Folino was off with a wrist injury, we’d lost Rich Atkins to a badly cut leg just before half time and Oscar Roberts in a courageous attempt to mark hit his head on the ground and was off with concussion, one on the bench for the last quarter!

At the 8 minute mark of the last quarter, Charlie Miles goaled to bring us within 2 points of a disinterested Marcellin and it was game on. The boys were battling hard but you could see they were running out of legs.  Marcellin kicked away and while we continued the fight just couldn’t bridge the gap as the Eagles ran out 17 point winners. Our best was Harrison McIntyre, Joel Melnjak played his best game of the year and his run off the backline was a feature of his game.  With Cam H already out and Rich Atkins off by half time, he inherited a big job on Marcellin’s key forward and won easily.

The pressure is now on as we are definitely in the relegation zone and need to put a couple of wins on the board to see us clear out of the danger area.

Better news for the other sides with wins recorded by the Reserves, Under 19s and Senior Women, while the Thirds had a bye. Match reports for all other games are available on the website.