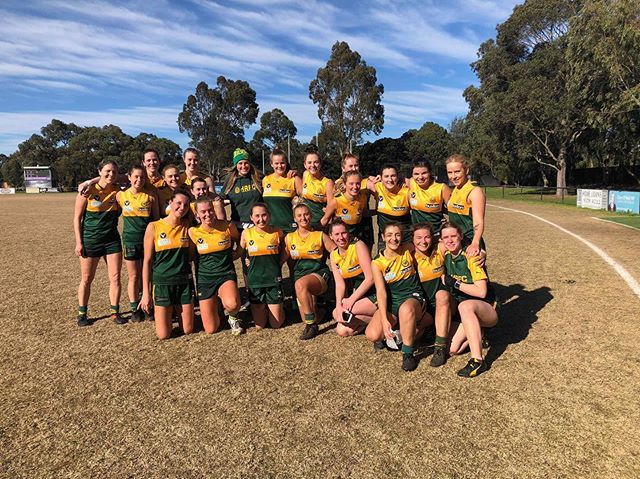 The Rovers Women’s match this week was an away game up against Oakleigh, in the second-last match before finals.

Every week our women are thrown a challenge and this week was no exception with Collins, Ebbott, Gould, Hurst, Miriams and Roberts all missing from last week. We all wish Chloe Miriams the very best with her recovery from her knee injury.

Oakleigh were 4th on the ladder and playing to keep their finals chances alive, so this was also going to ensure we would need to bring out our best to get a win.

As if on cue, we got the ball out of the centre beautifully and then quickly down to Merrick who snapped truly…the first Rovers goal was on the board in less than 15 seconds!

More Rovers goals followed not long after to Clarke and Phillips, all within the first 10 minutes!! When the ball did get into Oakleigh’s forward line, Harvey and McLaren were combining well to turn defence into attack.

All twenty Rovers women were playing with confidence and were prepared to take the game on. They were really going in hard to get the ball and feed it off, showing the Rovers great ‘team first’ spirit.

Then right on the siren Tash Harrison put through another great goal and we ended the quarter 4.3.27 to no score…what a quarter!…arguably the Rovers Women’s best for the season!! (…so far)

More of the same desperation was shown in the second quarter. Chase took a great grab up forward and kicked superbly to Merrick who snagged her second goal for the match.

The desperation shown by our back-line was inspirational and when Harvey did another great smother and tackle, our girls seemed to go up another cog!  Atta (Lucy) and Dendrinos were doing an awesome job around the ground.

Phillips was having a superb game and Clarke was racking up possessions at ease. Oakleigh really looked shellshocked at the willingness and desire of the Rovers to get in first to win the ball.

This quarter was a bit of a stalemate. Oakleigh were doing their best to put our girls off their game and they had lifted as we thought they would. However we held steady and just played no-nonsence footy.

Lenaric was simply awesome with her ruck work and generally around the ground as was Naylor who never ceases to amaze us all with her ability, desire and sheer courage she shows every week.

Now against a strong wind in the final quarter we were still going in hard to be first for the ball. Coach Curry had asked the whole team to not drop our intensity and to finish the game off strongly.

We somehow worked the ball down to Kavanagh who finished off with a great little snap for another Rovers goal and this topped off another great game for the ‘Kavanagh dynamo’.

I also must mention Cullen’s work-rate and evasive, baulking skills were a delight to watch! In fact there was simply too many highlights to cover in one match report!

Another great display by the Hampton Rovers Women for a much deserved WIN! Go Rovers!!