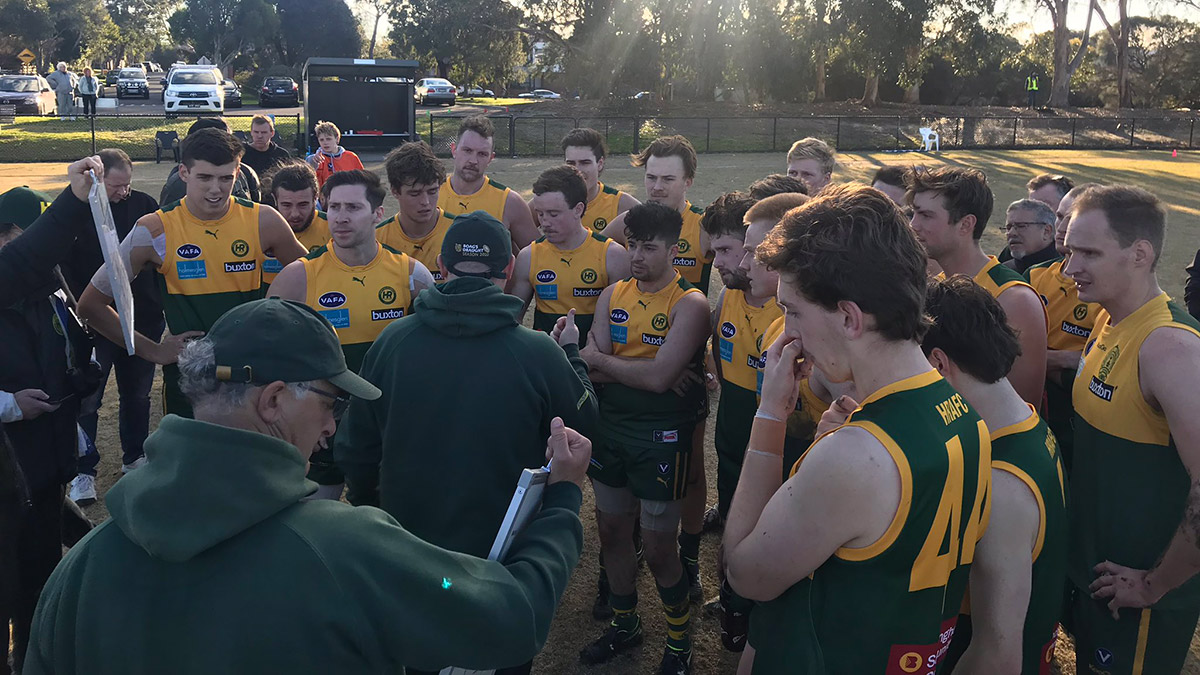 A difficult day on Saturday with an undermanned Rovers going down to Williamstown CYMS in the Seniors and Reserves.

The day got off to a great start with over 90 supporters at our Christmas in July Luncheon. A great fun day had by all. Credit must go to Don Scarlett as our MC. How did he get Santa to make a special appearance and more incredibly, how did he get the old stagers take on the Ladies table in a Jingle Bells sing-off?  The women had an easy win.  Truly amazing!

It was down hill from there, and with 35 players unavailable, it was always going to be a tough assignment against the undefeated top side, who were fielding there best team of the year, also featuring a couple of VFL players.

Williamstown were just too big, too strong, too quick and too skilful for our youthful team that battled hard all day, but just couldn’t match it with their opponents.

While it appeared we were blasted out in the first quarter, we actually held our own against the gale for the first 15 minutes. Unfortunately, the floodgates opened for a few critical minutes, they got their tails up and were gone!  While 6 goals was a good lead at the first break, there appeared to be a 6 goal gale blowing to the southern end.  Daniel Corp, captain for the day and playing his 100th game, was playing the role he enjoys, the loose man in defence and midfield and was knocking up getting possessions.  Charlie Miles was on top in the ruck but our mids were not taking advantage and time and time again the Willy mids collected the loose ball and belted it forward.  Brendan Culvenor kicked our only goal for the quarter showing he still has a bit of pace when needed!

In the second, we had the breeze but never really capitalized on it.  A goal to Harrison McIntyre, then one from Ben Kneebush with a long bomb from outside 50m and a classy bit of play when Cam Hetherington delivered the kick in to Pross, he hit Bergman lace out who kicked to Sam Bradford who kicked accurately on the run.  But Willy still managed to outscore us. At the main break a 43 point lead to the opposition.

Spirits were low and it looked like being a shellacking in the second half, as the Willy boys were on their game and eager to begin.  Meanwhile, the Rovers players were still in the rooms getting last minute instructions from the coaching panel.  In one sense we held them in the third quarter.  They kicked 6 but our backs defended valiantly, and it was just the weight of inside 50s that eventually led to the goals being kicked.  Cam Hetherington was having a good tussle with his bigger opponent, Rich Atkins was given the job on their main goal kicker from our last game and was holding him well, Jewelly was battling on but finding the pace a bit hard, Ben Kneebush had his hands full with a couple of tricky forwards but it was really the ability of the Williamstown midfielders to get clear and deliver, often under minimal pressure, to a leading forward.  Great to see Rory Lynch having a run in the seniors, old habits die hard and whenever he got the ball he was looking for the outlet player who just was never there …he was still living in the 2014 Grand Final!

At the final break, Quonny asked the boys to get to 10 goals for the day.  He could see that we had tired and while we had the gale, the opposition didn’t look like slowing down.  Cam H went forward and provided a target.   Daniel Corp kicked his second goal from the square bamboozling his opponent with his agility.  Brendan Culvenor picked up the loose ball and kicked to the advantage of Cam who marked and kicked accurately.  Great to see Joel Melnjak win the contest in the ruck, pick up the loose ball and snap the goal.  We kicked 5 for the quarter to bring a modicum of respectability to the score.   Tim Jones went in hard all day and threw his body on the line time and time again, Pross tried hard against stiff opposition, Joel Melnjak contributed whether in the ruck or around the ground.

Anyway, at least the game against the top side is done and dusted.  After all, they are 3 games and 80 percentage points ahead of the second team.

Next week, we travel to Marcellin in a must-win game. We are about equal with them on points and will have at least 6 players back in town and ready to boost our stocks.

The Reserves were even more impacted by the unavailability of players. More than half the team had played less than one game in the Ressies and the teamsheet looked like the Thirds team. The team has slumped to four wins, with the last victory being over top side Old Ivanhoe. On Saturday, just three players who played in that game, played in this round 12 clash. Similar margin to the Seniors, with goals to Brandon Scott, Mat Care and Nick Jackson. Jesse Donald, Ash Fisher and Harry Hodges were best for the Rovers. Looking forward to next week where players will start to return!

Match reports are available on the website for the Women who recorded another win over Oakleigh and the Under 19s who went down to Glen Eira.

The story of the day however goes to the Thirds. On Thursday night they had 16 players and looked set to forfeit. By Saturday morning, they had 24 players, including Andy Devola, who played his first game of footy. While a few players did drop out, the Rovers were still able to get a team on the park – credit must go to Andrew McGregor for a great effort! The club actually received a letter from Monash Blues thanking us for such a huge effort in getting a team together – their previous two matches had been called off due to the opposition forfeiting and one of their players finally was able to run out for a major milestone. Thanks also to the Monash players who looked out for Andy and the footage of him getting a handball is something to savour. A great positive story all round – footy is much more than just a game.