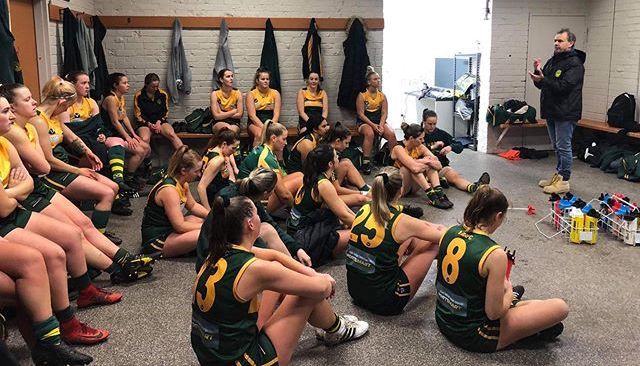 The Rovers Women played their only game of the season at Boss James Reserve and faced Swinburne Uni in subzero conditions.

Luckily and amazingly the footy gods were upon us, as the main rain and hail downpours stayed to either side of game time. There was even a thing called ‘sunshine’ poking through at times during the game.

The game started at a blistering pace with our girls looking like they really wanted to prove a point, that is, they wanted to win by more than a point… and put a team away. Mandy led the way with a such a dominant display in the first quarter that I had to replace the batteries in my calculator half way through, just trying to keep count of the number of possessions that she was racking up… (at least 12 for the record!).  Bianca’s ruck work was a joy to watch with our ‘mosquito fleet’ such as Bree and Amy, feeding of her beautifully and setting up some strong marking by Kate and backed up by awesome forward pressure from Zara, Tarryn and Harmoni.

Unfortunately we just couldn’t snag a goal for the quarter and we finished with 3 points however we were able to keep Swinburne scoreless….this was due to the great work from our backline led by Chloe McLaren who just keeps getting the job done week in and week out. It was great to see Nicky in her return match take a saving back-line mark by backing bravely into a pack. Chloe Miram’s marking and Kristy’s tackling and run were some of the other back-line work that helped keep the opposition to ‘donuts’ for the 1st Q. Unfortunately however, Kristy had also received an injury late in the quarter and was out for the rest of the match.

Q2: As it’s often said “when the going gets tough, the tough get going”…and this definitely applies to the Hampton Rovers Women’s team. Through our constant pressure, teamwork and just general hard work the floodgates opened a little and we were able to slam on three goals and a point to nothing for the quarter…in a low scoring game this was gold!  The first for the game came after a chain of teamwork ending with Bree to Natasha who finished off a classic ‘team’ goal.  Then not long after it was ‘Bree-Anna In-Everything Kav-anagh’ who roved Bianca’s tap and hand-balled to Taylan, who in displaying ‘more ‘Skills’ than a Bunning’s toolshop’, neatly slotted a special goal…champagne football!…however after such a high, not long after Chloe Mirams fell awkwardly and hurt her knee and immediately had to be stretchered off the ground. Lets all hope she is ok and recovers soon.

Q3: We now had two of our key back-half players out for the rest of the game, so a few positional changes were made by the coach to help support the back-line. With true Rovers grit and determination and girls dug deep. Kate gave good support as did Grace Atta, Katilyn and Savina. Chloe continued to be the general in the back half. A rushed behind was the only score for Swinburne for the quarter. This was a really great effort by the whole Rovers team.  Similar to the first quarter we were continuing to press but could only manage points (5 for the quarter). We would go into the final quarter with a 26 point lead but would still need to focus and play hard to ensure we got over the line at the end, as we all know things can change very quickly in a game of footy particularly when it’s a low scoring match.

Q4: Into the final quarter and we showed that we were not going to take our foot off the pedal and slow down. When Bree put in an awesome shepherd for Tarryn who somehow conjured up a very special backward banana dribble goal…it was a case of ‘Tazza you beauty!’…sound familiar?

Going forward soon after, Jaimie showed a few party tricks of her own by spinning out of packs and getting the ball to our forwards.  Fran and Lucy Atta were hard at the ball all day and some very determined football was shown by Grace McArthur and Kellie. We all admire Megan and the way she goes about her footy and this game was no exception as she never got beaten in any contest!